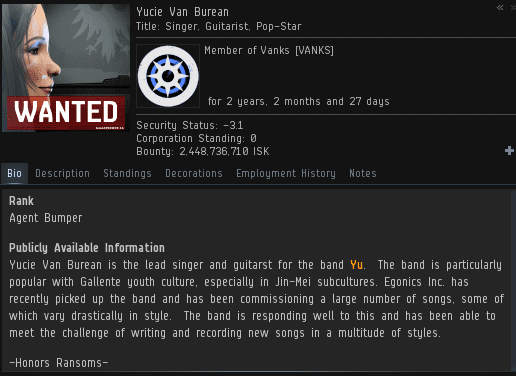 Agent Yucie Van Burean enjoys the social aspect of EVE. She loves meeting people and making new friends. One way to break the ice is to gank; another is to bump. Yucie also employs another common method to greet unfamiliar faces: She places the mark of 315 on them.

Yucie placed a bounty of 315,315 isk on Fictions, a stranger whom she judged to be a highsec carebear. Fictions didn't like it. Not one bit.

Yucie was taken aback by Fictions' extreme reaction. After all, it was just a friendly bounty. She politely informed the 2006 character that bounties cannot be retracted. And she made it perfectly clear that she was not intimidated by the threat of war. Our Agents love to shoot ships that can shoot back.

Fictions and Yucie both belonged to small corporations. Yucie was a member of Vanks; Fictions' corp was called Kid's. Despite Yucie's admirable attempt at diplomacy, the two corps were sliding toward war.

Fictions ratcheted up his rhetoric from "hostile" to "EULA-bending". The die was cast. Fictions declared war on Yucie's corp. 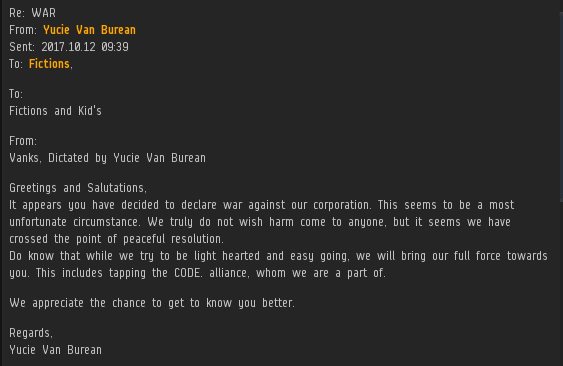 As I said earlier, Yucie enjoys spreading fun. Wardecs often provide opportunities for spreading fun and content to a large number of people. Yucie cautioned Fictions that her friendship with the mighty CODE. alliance meant that the conflict was likely to spread.

Fictions was aware of the CODE. issue. He resolved to go on the offensive and declare war against CODE., too. Perhaps Fictions realized that CODE. primarily consists of gankers, not wardeccers. What the carebear didn't count on was the fact that Yucie was also on friendly terms with The Marmite Collective, whose specialty is engaging in highsec wardecs. And within minutes, the Marmites chose to join the war as Yucie's ally.

To put it mildly, Fictions was displeased to learn that he'd unintentionally gotten his corporation involved in a war with the Marmites. Apparently the carebear never considered that CCP's pro-defender wardec mechanics might backfire on him.

It's a sorry carebear who starts a war and calls himself a martyr. Yucie didn't let Fictions get away with it. But that didn't stop him from writing a self-justifying reply:

Fictions had gone from hawk to dove in record time. Yucie observed that this miner was one of the most pathetic she'd seen. Still, things could get worse for Fictions. A lot worse. 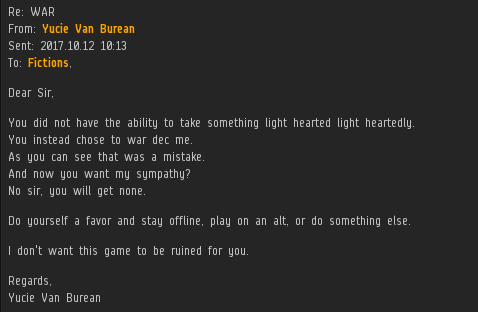 Our Agents are known for having an extraordinary capacity for compassion, and Yucie is no exception. She'd already tried to warn the carebear against hurting himself, but he hadn't listened. Now she had to warn him again. If he persisted, Fictions could find himself walking down a very dark path indeed.