Previously, on MinerBumping... After being besieged in Gelhan for weeks, the Mission Ready Mining corp's morale was suffering. Agent Georgia B Dixie reigned with impunity. But a fiery radical named Patrick Bick threatened to destroy Georgia and liberate the miners of Gelhan.

On occasion, a new miner would try his hand at mining in Gelhan. Georgia hoped to protect these newbies, but the ravenous bot-aspirants tried to recruit them into the resistance as cannon fodder.

After such a prolonged siege, some miners began to adopt a fatalistic approach to life. They would mine without permits, knowing perfectly well that they'd suffer for it.

Thus far, Patrick hadn't made good on his promise to free Gelhan from the New Order's grip. Perhaps he had a clever plan running behind the scenes, and he was only pretending to waste his time whining in local.

Agent Georgia breathed a sigh of satisfaction each time she completely cleared the system of miners. Patrick and his friends spent hours docked up, waiting for her to leave. When would their plan be set in motion?

From time to time, Patrick uttered thinly veiled threats at Georgia. Our Agent sometimes forgot about Patrick, but he certainly hadn't forgotten his vow to avenge Gelhan.

Georgia viewed Patrick as just another miner in need of the Code. She was confident that he could enjoy EVE if he learned how to comply. The miner wouldn't need to pretend to be some big shot anymore--as a Code enforcer, he could be a big shot for real!

Assuming Patrick ever had a resistance plot to begin with, he abandoned it. The bitter, cynical miner grumbled one last time and logged off. Another day passed. 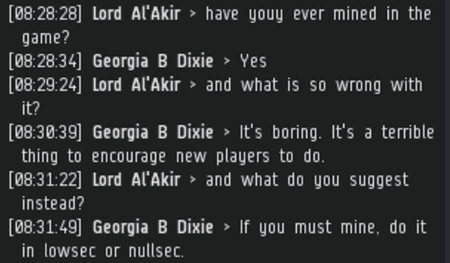 As time went by, the miners of MRM grew accustomed to Georgia's presence and control over their activities. All docked up and nowhere to go, there was little else the miners could do but speak with her. 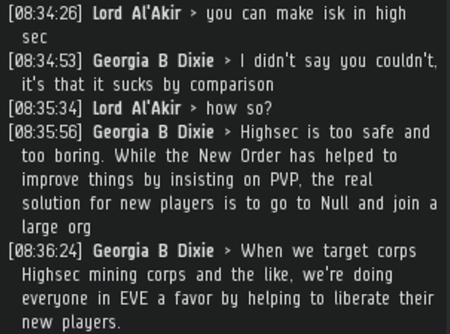 Lord Al'Akir interviewed Georgia in local chat. He wanted to understand why it was that this Machariel-piloting bumper refused to let anyone mine.

Despite his many questions, the miner was defiant. He knew that Georgia was often accompanied by suicide gankers. He would mine anyway, and he would continue to lose ships. 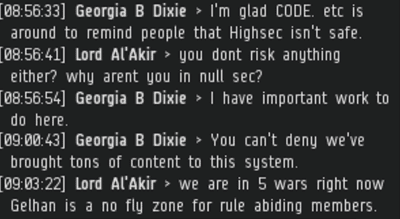 Eventually, the miner revealed that MRM had warned its 2,400+ members not to mine in Gelhan for the indefinite future. If that was true, then Georgia was enforcing MRM's own rules, as well as the Code. 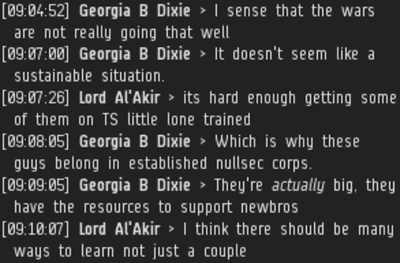 Georgia tried to get the miner to see reason. But the fatalism ran deep. Mission Ready Mining knew their situation was hopeless, but they refused to adapt.

Then, just when everyone was getting used to the "new normal", something happened:

To be continued...
Posted by MinerBumping at 20:57