Previously, on MinerBumping... Mission Ready Mining corp suffered weeks of punishment at the hands of Agent Georgia B Dixie. Though the corp had thousands of members at its disposal, our Agent could not be stopped. Then, at the very moment Georgia stepped away from Gelhan, another bumper arrived to take her place: Agent Kalorned, back from vacation.

Kalorned calmly strode into the system and took his place at the top of the Gelhan hierarchy. Some of the miners were new, but others recognized him. 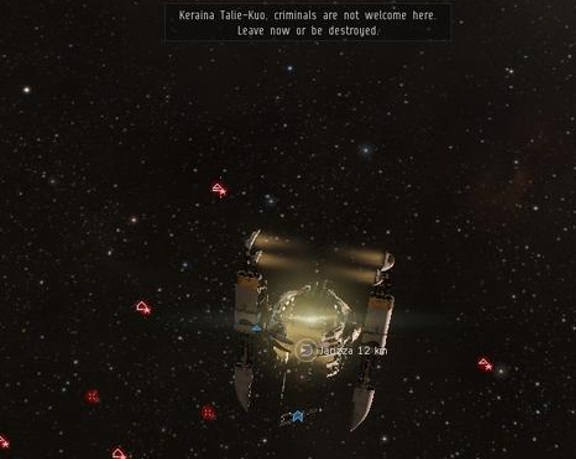 There was no resistance waiting for Kalorned in the asteroid belts, though MRM members were camping the entrance to the system. No matter. Kalorned's gank alts slipped through without incident.

Word of Kalorned's return spread quickly. Long-time veterans of the Gelhan siege knew what they were in for.

They say miner bumping is like riding a bicycle. Kalorned took to it easily. Our hero sent Flobadybop Amouh sailing out of the belt. She was so upset that she accidentally cursed at one of her fellow MRM members.

Kalorned was happy to pick up where he'd left off. But some things had changed in his absence. "Term 16" was all the rage.

Term 16 refers to a rule in the official EVE Terms of Service document, which reads:


"You may not do anything that interferes with the ability of other EVE Online subscribers to enjoy the game or web site in accordance with its rules. This includes, but is not limited to, making inappropriate use of any public channels within the game and/or intentionally creating excessive latency (lag) by dumping cargo containers, corpses or other items in the game world."

Some miners believe this rule outlaws bumping, because it interferes with a miner's ability to enjoy mining. Similar interpretations of this rule would outlaw taking another entity's space in nullsec if they enjoyed holding territory, or defeating another player in PvP if he only enjoyed winning.

Flobadybop was certain that she could space-lawyer her way out of being bumped. That strategy hadn't worked against Georgia B Dixie, but maybe Kalorned would see reason?

Our Agent politely informed the miner that she wasn't being harassed. That ought to settle the matter.

Flobadybop insisted that it was against the rules to diminish her enjoyment of EVE Online. As long as Kalorned was making her feel uncomfortable, he should be banned from the game.

Kalorned is no Johnny-come-lately to the Code. He knew that Flobadybop's subjective view of things wasn't authoritative; highsec has a Saviour for that. And Kalorned's copy of the Code said that miners need permits.

Flobadybop was forced to dock up in disgrace. Kalorned continued to bump miners and haulers at will. Annakazel resisted at first, but then ran away, leaving behind his drones as a tip for Kalorned's good service. 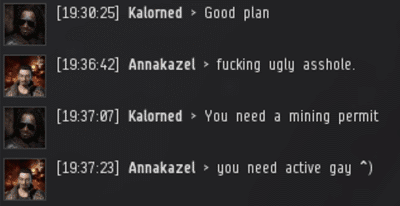 Agent Kalorned was somewhat surprised to see that MRM's "defense" of Gelhan hadn't grown more organized during his absence. If anything, it had deteriorated. Weeks earlier, they had fielded fleets of ships to try counter-bumping and yellow-boxing. Not today. Apparently Agent Georgia had broken them.

One after another, miners did nothing but complain about harassment and Term 16. Kalorned sensed that they were trying to build a case against him. But it didn't matter how many people accused him of harassment; only the truth mattered. Kalorned got his truth from the Code, and that meant the siege of Gelhan would continue.