Ah, bitter carebears. They always come up with some reason to be bitter about the power and success of the mighty CODE. alliance.

When Cruz Wolf and his fellow bot-aspirants witnessed a righteous gank, they had to get all grumpy about it--instead of cheering like normal people.

Suddenly, the miners were interrupted by a voice of authority. She would challenge their nonsense. 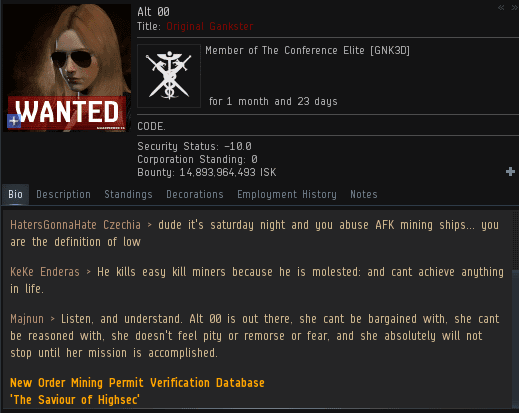 Agent Alt 00 was on the case. Few Agents love defending the honour of the Code more.

With a simple, deft maneuver, Alt 00 utterly destroyed the carebears' argument. But let's give the miners the benefit of the doubt, shall we? Is it true that CODE. engages in less solo PvP than other warrior alliances do?

According to data from zKillboard, CODE.'s elite PvP'ers have scored over 53,000 solo kills. An impressive figure, but that constitutes only 23% of the total. Maybe those miners were onto something? Let's compare CODE.'s stats to another well-known PvP alliance, just to be sure.

Pandemic Legion, though certainly not as elite as CODE., may be used as a baseline. Only 11% of its kills are solo. Clearly, CODE. is tops when it comes to solo PvP. The raw numbers are also interesting: Though PL has more than four and a half times as many members, it has inflicted less than twice as many solo kills as CODE. (In addition, CODE.'s been around for 5 years; PL's stats go back to 2007.)

The numbers don't lie, though carebears do: CODE. is as good as it gets, even when judged according to the miners' own cherry-picked metrics.

Of course, there's nothing wrong with using multiple gankers to score a kill. Indeed, one of the main perks of joining the New Order is that you're never alone. From the moment you decide to enforce the Code, the Saviour of Highsec will be watching over you. Not in a creep way--though what do you have to hide?

Alt 00 took pity on the miners. She'd seen this sort of jealousy plenty of times before.

Our Agent happened to be visiting Kino. It's a system with a rich history and poor miners.

Still, even a poor miner can afford to buy a mining permit for 10 million isk, so long as he has a shred of integrity.

Speaking of never being alone, Alt 00 was strengthened by the spirit of Agent Bing Bangboom who, though not in the system at the time, had a palpable presence there.

The essence of the New Order family is unmistakable: Elite PvP, good courage, and good cheer. No wonder people think of us when they think of EVE.
Posted by MinerBumping at 20:45