Lately, there's been a lot of buzz and chatter about the New Order and other highsec professionals. Critics accuse us of bullying, griefing, and the like. That's nothing new, but it's in the air. I've gotten quite a few EVEmails from the targets of suicide ganks. They complain that the Agents of the New Order are harassing them and violating the EULA by shooting their spaceships in a video game about shooting spaceships.

As the Father of the New Order, I take certain amount of responsibility for the actions of my Agents. This is why, when I talk to the miners who contact me, I am very clear in letting them know that they're not being bullied. In the interest of efficiency, Agents of the New Order can direct future complainers to this post and its sequel. Because today and tomorrow we're going to discuss the bullying, griefing, harassment, etc. issue and how it pertains to the New Order.

Let's begin by examining the perspective of the critics. My attention was drawn to a recent blog post written by a highsec carebear named rswfire. It's a manifesto entitled "The Cost of Bullying in Eve Online". Here's how it starts: 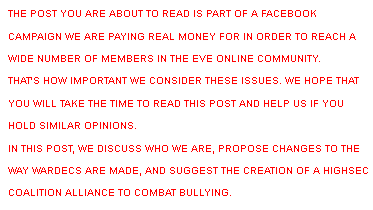 Yikes. You can read the entire post at the link above, but I'll get right to the heart of the matter. Basically, rswfire has a massive grudge against highsec philanthropist Psychotic Monk.


"Despite less than a dozen of us being active, our old foes declared war on us immediately. Break-a-Wish Foundation, Pendulum of Doom, Psychotic Monk's corporation, CODE (the alliance for the miner bumping douche-bag), and a few one-man corps all decced us within a thirty minute period."

Most of rswfire's "anti-bullying" post actually consists of demands for CCP to nerf wardecs (again). The fact that wars still exist is apparently proof that wardec mechanics need another overhaul. Although I must say, rswfire's own employment history suggests that he's taken ample advantage of the current wardec mechanics: 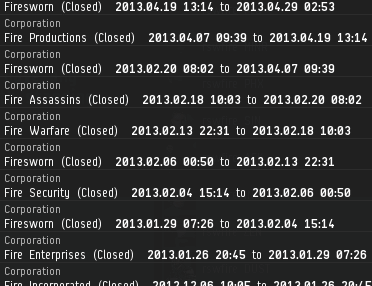 Finally, rswfire calls for the creation of a pan-highsec coalition to rally the good guys together and fight the bad guys. (Friends, there already is one, and it's called the New Order.)


"There are a number of entities in highsec that work together to create conflict with the players in highsec, to make their lives a living hell, and no one stops to think about the consequences. Worse, no one has stopped to consider how inhumane these actions are.... I can sum these people up in my book with one word: assholes. Tell me I'm wrong."

There's a certain irony here. At the same time the alleged evil bully Psychotic Monk was running a charity event to raise thousands of dollars for the Philippines disaster relief, the alleged anti-bully crusader rswfire was busy calling people "douche-bags" and "assholes" on his blog. But rswfire would say they deserved such harsh treatment, because they dared to do some spaceship combat in a spaceship combat sandbox.

Meanwhile, blogger The Nosy Gamer reflected on the subject in a more coherent, but still misguided, blog post. His questions were, in the context of the New Order and other highsec content providers, "Why harass high sec miners?" and "Why do people consider the harassment of high sec miners so entertaining?" The comments section is filled with people debating the psychological ills that motivate people to shoot at miners in highsec.

Interestingly, The Nosy Gamer claims to be a "low sec carebear", and doesn't seem to have any moral qualms with people shooting at him while he mines in lowsec. By contrast, he automatically equates shooting at miners in highsec with "harassment". At no point does he explain why he thinks it's harassment to bump or shoot at people in highsec, or why he thinks spaceship combat is morally sanitized the moment it crosses the 0.4 security threshold.

The Nosy Gamer isn't alone, though. Lots of miners agree that spaceship combat in highsec is inherently harassment, griefing, and/or bullying. Moreover, many of them are convinced that it's against the rules. Carebears constantly tell us that they're filing petitions against us. Plenty of them are lying, but not all. Recall that earlier this year, Agent Zak Fey reported on his pub crawl with the GMs at Fanfest. They say the New Order is the cause of more petitions than any other organization in EVE.

Is it true? Is the New Order a massive griefing operation, filled with bullies who "harass" miners instead of playing the game in a more ethical manner--by shooting miners in lowsec, for instance?

Well, no. Not really.

Caution: A real talk warning is in effect for Part 2. Reader discretion is advised.
Posted by MinerBumping at 22:09