For the Agents of the New Order, saving highsec is a bit like running a relay race. From time to time, you pass the baton onto someone else, confident that they'll give as much effort to the race as you have.

Agent Kalorned was pleased by the progress he'd made in the Gamis system. He decided to go help another system, and lent Agent KrazyTaco his bumping ship, a Stabber Fleet Issue. Sadly, the Gamis locals assumed that Kalorned's absence meant they could act like spoiled little children again. KrazyTaco brought them back to their senses with some good bumps.

KrazyTaco encountered a miner named johantttt. He was curious about the Code at first, but before he'd even had a chance to read it, he made a snap judgment. He made himself known as an enemy of the New Order.

johantttt began playing EVE in 2010. Carebears would say that he's a "newbie". He was as clueless about EVE as he was about the Code.

Despite johantttt's hostility and prejudice, it was an Agent of the New Order who would help him learn the game mechanics. As usual, the carebears who demand nerfs to highsec PvP in the name of helping "new players" did nothing to help johantttt.

KrazyTaco was alarmed. He began to sense that johantttt might be plotting to attack his bumping Stabber. He warned johantttt that CONCORD wouldn't look kindly upon him. But johantttt was blinded by rage. He didn't believe a word of it.

Although KrazyTaco is officially a member of GoonSwarm, he recognized me as the "top leader" since he was in New Order territory. johantttt wrote my name down for future reference.

Winning hearts and minds is pretty much what we do. That doesn't mean that it happens immediately, though. Sometimes tough love is necessary. As johantttt's Drake inched closer to KrazyTaco's bumping Stabber, the application of tough love became increasingly likely.


KrazyTaco > johantttt are you going to do something with that drake
johantttt > suicide maybe
johantttt > can someone answer me what happens i i shoot here? i cant be in high sec?
Olivia shy > you shoot concord will blow you up
johantttt > but whats about security status?
johantttt > i pressed my shoot button one time and slipped

johantttt claimed he was ready to give his life in a desperate attempt to destroy the New Order, but he was hesitant. He didn't want to die in vain. What he didn't realize was that all rebellion against the Order is vanity.

johantttt's yellowboxing of the Stabber inspired the rebels to speak up in local. They were ready to petition CCP to ban the New Order. They assumed that because we haven't been banned yet, it must be because no other miners have tried it before.

KrazyTaco was running out of diplomatic options. War was imminent. He prepared for the fight of his life.

All of a sudden, johantttt realized that his Drake didn't have a warp disruptor fitted! If he tried to suicide gank KrazyTaco, then KrazyTaco could just warp away. So before the gank, johantttt made KrazyTaco promise not to warp away. The stage was set for an apocalyptic confrontation.

johantttt tried to suicide gank KrazyTaco with a Drake. He failed, naturally. The Stabber came equipped with drones, which were ordered to attack the Drake after it opened fire. This way, KrazyTaco would be able to get on the killmail and see the Drake's fittings. 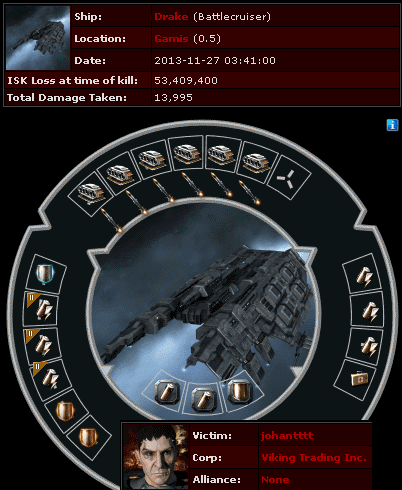 johantttt's suicide Drake used one of the more unusual gank fits I've seen. He wasn't able to tank CONCORD as planned, but at least he didn't run out of capacitor for his missile launchers.

Kalorned uploaded the latest in his series of Gamis videos to YouTube. At the 2:18 mark, you can witness video footage of the Drake vs. Stabber duel! Modern technology is wonderful. You'll feel like you were there.

johantttt was doomed to defeat from the moment he spat on the Code. Now that he'd been humbled and brought to justice, would KrazyTaco succeed in reforming the carebear?