Previously, on MinerBumping... Agent Kalorned rolled up his sleeves and ventured into the wildlands of Gamis, which had mostly been untouched by civilization. He deployed weapons against the rebel carebears that they were unable to cope with: bumping and ganking.

I don't need to tell you what happened three minutes later. I'll just show you. 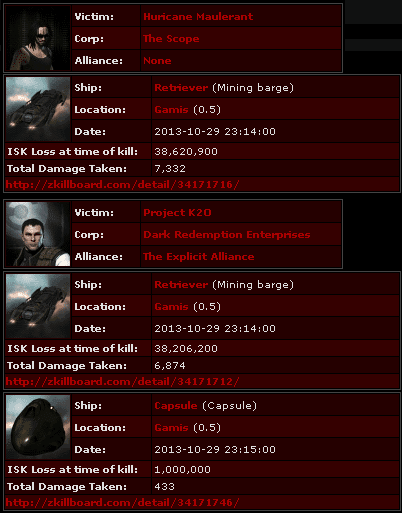 Two hostile Retrievers, out like a light. Then the silent Huricane Maulerant found his tongue. Isn't it funny how, when a highsec miner dies, that's when he becomes most alive?

Huricane was furious at Kalorned, but he seemed to direct some of the anger at himself, as well. He "should have known", indeed.

The formerly ignorant carebear was filled in on his responsibilities under the Code. We may not be "fuckers", but Agents of the New Order are just.

Many moons ago, legendary miner The Wis expressed suicidal thoughts after losing a dozen Mackinaws in one attack. Huricane's loss of two Retrievers wasn't in the same ballpark, but it was enough to give him a case of the blues. Kalorned provided a sympathetic ear.

When miners get passive-aggressive and self-pitying, it's important to remind them that they're not helpless. They have the ability to follow the Code and avoid being ganked. Thus, their fate is in their own hands.


Ben Nickfen > there is no law just a group of guys trying to bully isk out of people
Huricane Maulerant > What law did i break?
Kalorned > The law of high SEc - The NEw Halaima Code of Conduct - http://www.minerbumping.com/p/the-code.html
Vaigo Banestrum > I'm actually wondering how big that group is
Kalorned > Vaigo Banestrum decently sized
Huricane Maulerant > You just fucking thugs. Come to nullsec, you wont go there will ya
Ben Nickfen > funny thing is they have a -rating so how can they be enforcing a law
Kalorned > Null Sec doesn't need our help
Kalorned > High Sec does

Despite having been told about the Code just a few minutes earlier, Huricane expressed surprise at being told that he'd broken a law. He was distracted or something, I guess.

If you hang out with a crowd of bot-aspirants, it will have a deleterious, desultory effect on you. If you spend time with an Agent of the New Order, everything about your life will improve. Our goodness has a way of rubbing off on people. Now it was Huricane's turn to benefit.

The miner made a rare confession: He was frightened by the extent of the New Order's impact on the game. Many carebears are disturbed by how much influence we've had. But Kalorned was a trained Agent, and ready to defend the changes we've caused.

Faced with the truth, Huricane was still a little skeptical. No problem. Agents of the New Order are never afraid to prove by their actions exactly what kind of people they are.

Kalorned spied a Covetor piloted by Grtiger. Kalorned's spidey-sense went wild. He knew, instinctively, that Grtiger's crimes were a sensitive matter. Only after the punishment was delivered should it be publicized to the rest of Gamis. 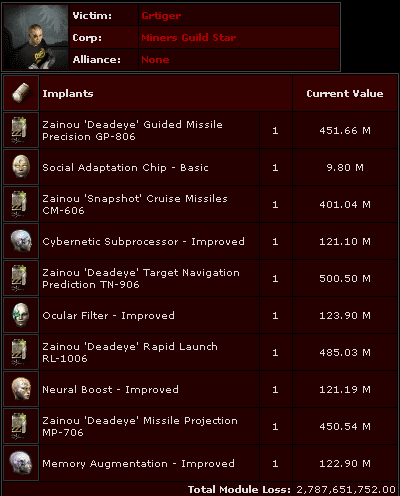 Grtiger's covetousness had gotten the better of him. He thought he could take shortcuts by plugging in some expensive implants. He was wrong. In highsec, the New Order has jurisdiction over your brain and every piece of equipment plugged into it. But how would the locals react? Would they call Kalorned a war criminal?

Actually, the local miners were impressed. And they softened to the Order, a bit. For many of the brutes, power is the only language they understand. It's a good thing the New Order has plenty of that to spare.

Satisfied by a job well done, Kalorned prepared to retire for the evening. He'd earned a rest.

Of course, when it comes to saving highsec, an Agent's work is never done.
Posted by MinerBumping at 20:52