The Tears of Babble

It's only fair that the New Order conducts affairs of state in English, since English is the most commonly-spoken language in highsec. The second most common: broken English. But that designation barely hints at its diversity. Let's look at some varieties, starting with the best:

I've noticed that when someone prefaces his remarks with an apology about his poor English, his English is often better than that of many native speakers. I'd much prefer reading something written by kikfamilie than by liberty, for example.

Then you have the translated English. toxa Heleneto's "divorce" comment is difficult to decipher, but at least all of the words made it through the translator.

Then there's the hybrid form. Procko Freeman is fluent enough to curse in English, but he spices things up with some of his native Czech, just for flavor. The subject line reads "motherfuckers", and "zasrana" means "fucking". Not sure about the "pico", but whatever it means, it's clear that the Code has been violated here. 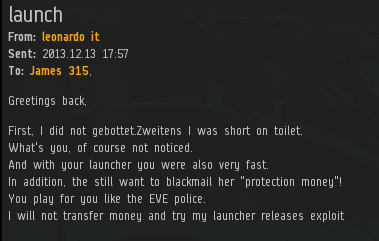 Finally, there's the half-translated version. It was run through a translator, but not successfully enough to clear the non-English words. Nevertheless, you can still identify the standard carebear excuses. 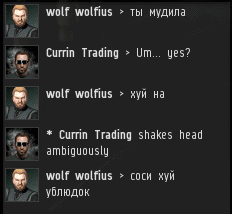 Still, it's easier to deal with broken English than the alternative. There simply wasn't time to translate what wolf wolfius was saying. Not when I had better things to do. I assumed wolf wasn't happy, since I had destroyed his ship only a few minutes prior.

From Google Translate: "You asshole / Dick on / Suck dick bastard" 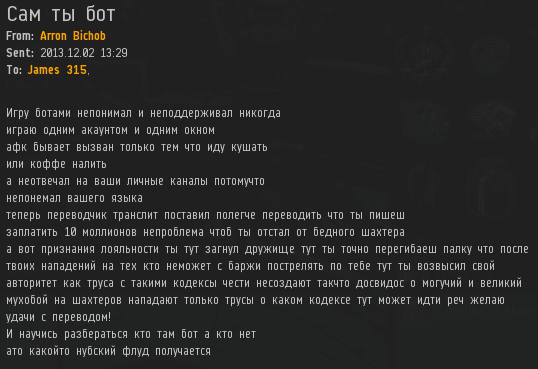 Arron Bichob sent me this wall of text. The only thing I could pick out was the number "10", which probably referred to a mining permit fee. I asked him for a translation. Remember, if a miner's tears aren't to your liking, you can always send them back and request a replacement. I wasn't happy with what I received. Surely, Arron could do better.

It's tough love, but unless you make a carebear put some real effort into this game, he'll never learn how to apply himself.

At first, Arron reverted to his native tongue.

"You do not like the translation, learn Russian, sir!"

I politely asked Arron to try again. This was much more efficient than learning how to speak Russian. That could take days.

Arron did a little better this time. However, to see if a lesson sticks, you need to gank the carebear again.

Dialogist didn't send me a wall of text, but I felt he still owed it to me to translate what little he did send.

"Shove your Code to go to hell!"

The New Order is big on courtesy. We do you a solid, so we expect a solid in return.

Dialogist learned English in a hurry so he could threaten to stop playing EVE. I don't see why I should take that as a threat, though. Some of the finest, most productive people on planet Earth don't play EVE. There are billions of non-EVE players. What's one more? And if you really think about it, those who spend their time AFK are non-players, too.
Posted by MinerBumping at 22:06