And now, ladies and gentlemen, I have an important message for you from Psychotic Monk. 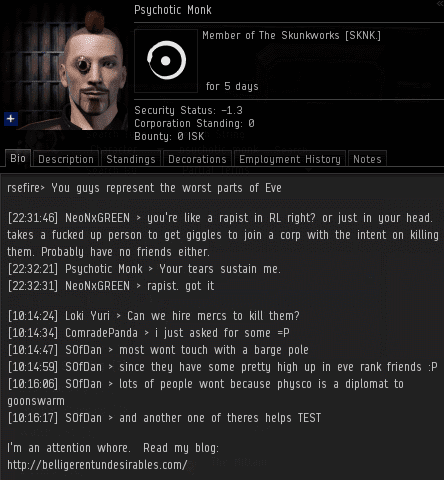 It's true. CCP created a charitable program to allow EVE players to send money to the victims of the typhoon that hit the Philippines last month. Psychotic Monk has announced that he will be running a promotion for this cause. True to form, his promotion involves suicide ganking a bunch of carebears and broadcasting it on his Twitch.tv stream.

You can read more about this event at the link. Here are the bullet points:

Why: All donations of isk or plex go to Hurricane Haiyan through the CCP Plex4Good program.

As part of the event, Psychotic Monk will be auctioning off some special items. Because my heart is filled with compassion, I decided to contribute something of my own: Well, sort of. This is not the Stabber Fleet Issue with which I have bumped so many miners as Saviour of Highsec. This is actually the original "Invincible Stabber". 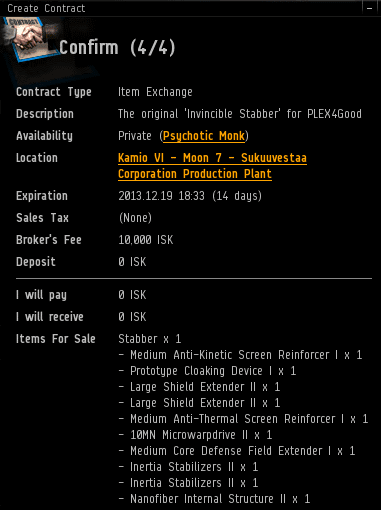 In early 2012, several months before the creation of the New Order, I first began to experiment with the possibilities of bumping miners out of the Arvasaras system ice field. I used a regular Stabber. It still has the original fittings. If you win the auction, you could own a piece of EVE history! Will the ship be invincible in your hands? Well, it's like I always say: It's not the ship--it's the man.

Nevertheless, the original Invincible Stabber, true to its name, was never destroyed. It was often the target of gank attacks. One miner, a carebear named Kharmha, was driven so batty that she dummied up a fake killmail on Battleclinc. (Unfamiliar with suicide ganking mechanics, she had herself using a Drake with heavy missiles.) But fake killmails are no substitute for the real thing, and her fellow carebears were crestfallen when they saw the Invincible Stabber continue to undock despite seeing the Battleclinic mail linked endlessly in local.

That would be bad "Kharmha". If you're interested in some good karma, then perhaps you'll join Psychotic Monk for this event.
Posted by MinerBumping at 19:15