Eggnog? Forget it. The beverage of choice this holiday season is carebear tears. These are traditionally drunk from a bag--a Grab Bag, that is.

Carebear tears aren't the only things that can be carried in bags, it would seem. 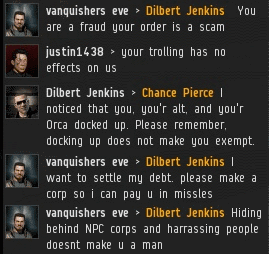 So many EVE players misspell the word "harassment". Even more don't know the meaning of the word. Here's a handy little poem to help people remember:

"Harassment" has one "R",
"Carebear" has two,
The New Order is here to help,
We would never harass you! 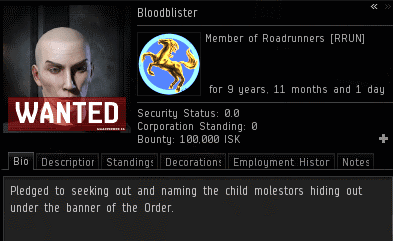 Bloodblister has been in the same corp for nearly a decade. Or at least, he was, until he biomassed himself just a few days ago. I guess that means the New Order was clean? 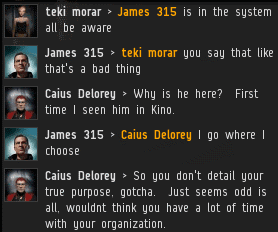 As an EVE rock star, I get a hero's welcome almost everywhere I go in highsec. I typically travel unescorted. There have been some assassination attempts here or there, but I don't judge the good people of highsec by the actions of a few lunatics. 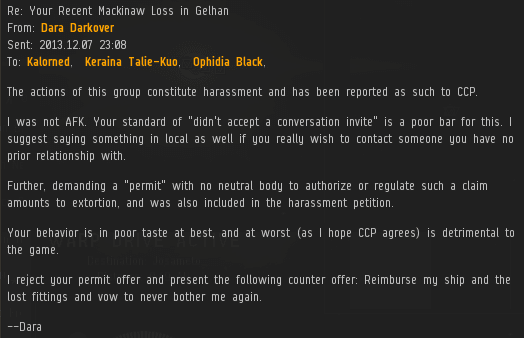 They say that a million monkeys with a million typewriters would eventually produce the works of Shakespeare, but I'm inclined to doubt it. Shakespeare's plays don't use the words "extortion" or "harassment" nearly often enough. 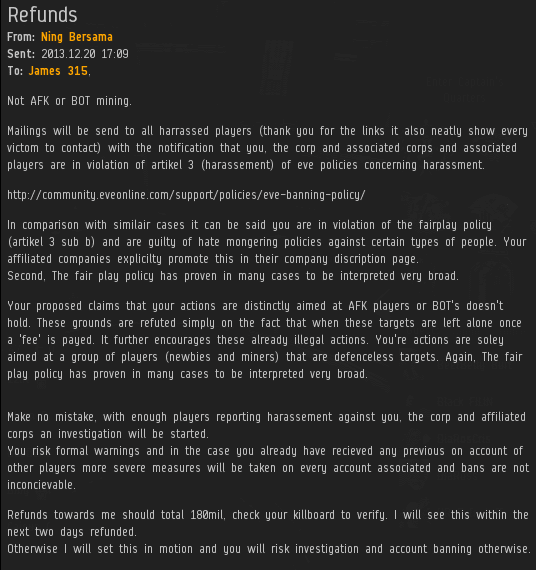 Ning Bersama breathlessly informed me of the laws against shooting at spaceships in highsec. I have to give Ning and the previous EVEmailer some credit, though: "Reimburse me or I'll get you banned" is an interesting tactic. There's a word for it, but it escapes me at the moment.

J Quillin is another miner who really puts the monkey typewriter theory to the test. The spacing he uses is a little confusing, though. Is he saying "fuck you" repeatedly, or is he saying "you fuck" repeatedly? 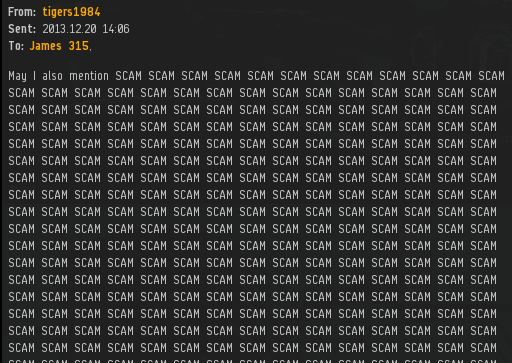 At least some carebears "own" their limited vocabularies. 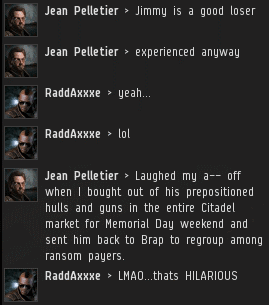 Jean Pelletier has been an ornery rebel for a very long time. These days, he shares with other rebels the tales of his victories. Unfortunately, the lack of rebel victories makes this difficult. For example, I didn't gank during the Memorial Day weekend, or move supplies or stock markets during that time period. In fact, by the previous December, New Order gankers were already using corps like New Order Logistics for the sole purpose of corp contracts to keep supplies off-market. Apparently, Jean's victory consisted of buying random stuff in random systems one weekend. It's such a fond memory for him that he still brags about it several months later.

...Then again, he's an "Alliance Fleet Commander" in a one-man corp with no alliance. If that makes him happy, who are we to judge?

aurora zirud wasn't too bothered by the loss of her Mackinaw. The New Order won't last long anyway.

Experimental Fun Times Corp RELOADED rarely gets applications. When it does, they're scrutinized very carefully. Chi Tawate didn't quite make the cut. However, I wish him the best of luck and I'm sure he will be successful in his future endeavors, whatever they may be.

On behalf of the entire New Order family I wish you a Merry Christmas and a Happy New Year!
Posted by MinerBumping at 20:10