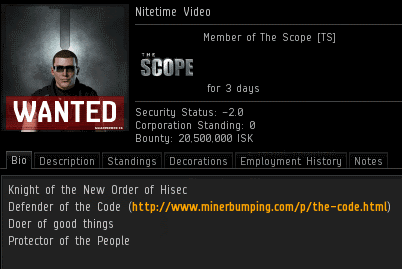 Nitetime Video joined a highsec mining corporation called the Raskil Tribe. Nitetime was lucky. He was very familiar with the teachings of the New Order and its Code. So before he set foot in the corp, he decided what lines he would cross, and which ones he wouldn't cross. If he saw miners doing unethical things, he knew how he would respond. When the time came to make a difficult decision, he would be ready.

Raskil Tribe is an industrial corp. Judging by the first few lines of their channel log, they were in the business of mass-producing facepalms. Despite the MOTD, Castill Amelana announced his intention to run a mining op in Abudban system. It's a safe, quiet, distant place--an entire 1 jump from Rens.


Castill Amelana > I am working on moving my big old Orca out there right now. It takes awhile to move his ass
Dan Pator > hi sec
Castill Amelana > well, the last one was in high sec too. and got Maxes Hulk ganked. concord was too slow for 4 gankers
Castill Amelana > wow, 25 guys in this ice belt
Nitetime Video > will there still be ice there when we start? we will def. want the orca then
Castill Amelana > I don't know. I have started so I can get some ice before it is all gone

To Castill's surprise, lots of other miners also had the idea of mining next door to one of the busiest systems in EVE. Nitetime urged Castill to bring an Orca to the mining op. The Orca's presence would be essential to the op's success.

Unfortunately, the ice was mined out even before the other corp members could arrive. So Castill chose another system, further away from the action: Barkrik, two jumps from Hek.

Nitetime was entrusted with scouting for the mining op. His ship was much faster than the miners', since he was in a Gnosis. The fact that he wanted to "guard" a highsec mining op in a combat ship aroused no suspicion. He would be needed if CONCORD wasn't powerful enough to stop ganks.

Nitetime's recon was accurate; there was plenty of ice in Barkrik. If Nitetime did as he was told, he could have a successful career in the highsec mining corp. He'd have a comfortable life. But Nitetime had decided long ago that his life would not be ruled by considerations of wealth and comfort. Nitetime became a warrior, an Agent of the New Order. He would put the Code first, no matter what the cost.

Nitetime's Gnosis tackled Castill's Orca and another corp member's Hulk. He judged these miners guilty of violating the Code. By this point, Nitetime had been in the corp for over a month, and had gotten to know the carebears well. He took pity on them, and offered to release their ships if they paid him a fair ransom.

The other members of Raskil Tribe began to persecute Nitetime by putting peer pressure on him to act in a manner inconsistent with his values. But Nitetime was strong. Fearless. He would not yield.

Nitetime's actions were confusing to Castill and his fellow carebears. They couldn't imagine why someone would torpedo a promising career in a mining corp. His actions were jeopardizing his chances of promotion. 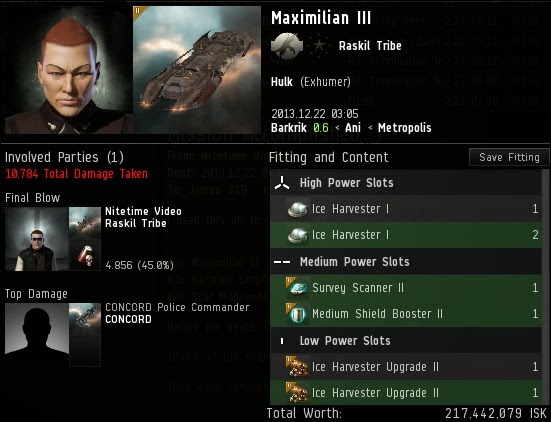 ...Not very good plans, as it turned out. The Hulk pilot somehow managed to get himself CONCORDed. As near as I can tell, he suspected some other players in the ice anomaly were repping Nitetime, so he attacked them with his Hulk's drones.

Suddenly, Scar Madeveda of Raskil Tribe appeared in a Hurricane Fleet Issue. He was determined to rescue the still-tackled Orca by destroying Nitetime's ship. But Nitetime was an Agent of the New Order. Destroying his ship proved impossible. 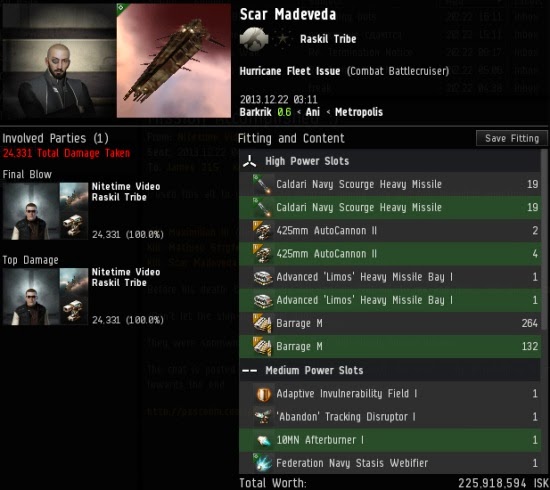 The Hurricane Fleet Issue died instead. Now nothing could save the Orca but full payment on behalf of the Hulk pilot. Nitetime hoped to get fully paid, but there was so much more he wanted to accomplish. Now that he had the full attention of Raskil Tribe, he had a golden opportunity to share the Code with them. Would they listen to reason? Raskil Tribe's future was at stake.

To be continued...
Posted by MinerBumping at 20:52