It's that time again--time for another Kills of the Week post. Or as we sometimes call it, the "D400 Power Hour". Let's look at some fine kills that took place during the week of November 24th @ 00:00 EVEtime through November 30th @ 23:59 EVEtime. 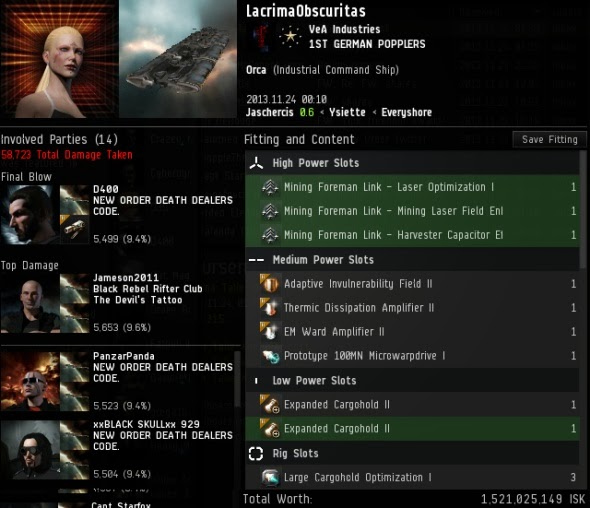 You can rarely go wrong starting off with a dead Orca. As LacrimaObscuritas unintentionally demonstrated, you're even less likely to go wrong starting off with a dead 1.5 billion isk Orca. Inflating the value of the kill were the ships carried in LacrimaObscuritas' oversized botting platform: Purifier, Jaguar, Legion, Anathema, and Arazu. If she'd been flying any of those instead, she might've survived this week. Alas, she was too interested in making money. 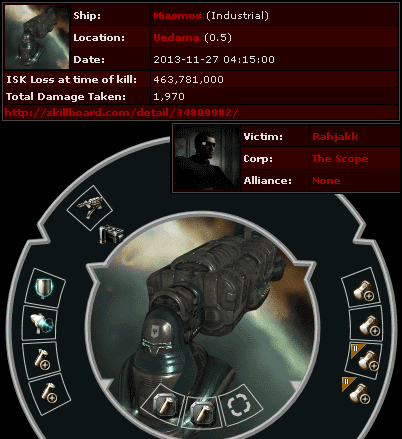 Notice anything wrong with the fit for Rahjakk's industrial ship? You guessed it! Rahjakk forgot to buy a permit. His ignorance of the Code cost him dearly when Agent D400 reminded Rahjakk of the part about not being totally safe in highsec.

The ship itself only cost a million isk, but the cargo was worth closer to half a billion. The cargo was not protected by the Plastic Wrap. Appropriately, the ship's tank was about as thick as plastic wrap, so D400 had no trouble tearing it apart. 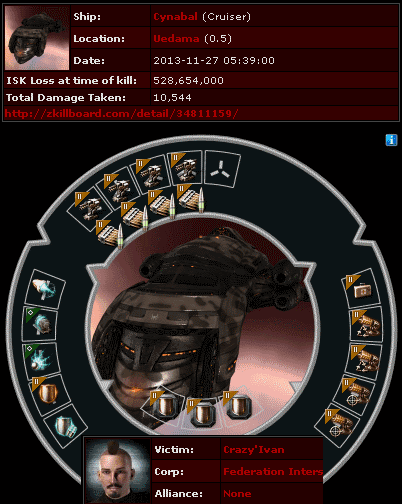 Crazy'Ivan has a long history of rebellion against the New Order. He likes to use a Cynabal to try to interfere with the New Order's ganks. If he really wanted to prevent ganks, though, he probably shouldn't make himself a target for one. Agent D400 dropped in unannounced on his old pal in a Tornado. Faster than you can say BLAP-BLAP-BLAP, Crazy'Ivan was down more than half a billion isk. When it comes to highsec, a white knight loses to a Knight of the Order every time. 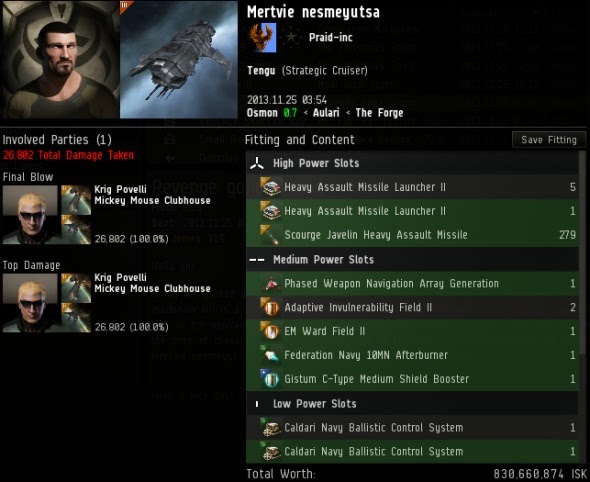 I don't know what makes the rebels think they stand a chance against the elite PvP prowess of our Agents. After Mertvie nesmeyutsa lost his Mackinaw to Agent Krig Povelli, ol' Mertvie wanted to prove that he wasn't "just a miner". So he reshipped into a Tengu and tried exercising his killright. This time the rebel managed to use the killright feature correctly, but he forgot about one important thing: The fact that he really is just a miner. Krig easily dispatched the 830 million isk Tengu, along with a 588 million isk pod. Carebears, leave the PvP'ing to the professionals, please. 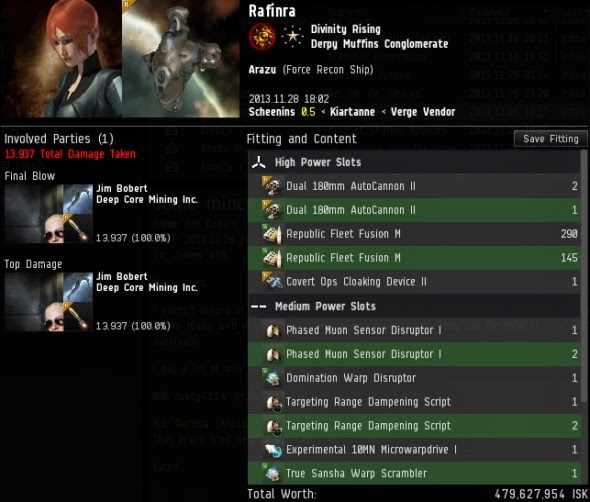 There was definitely something in the water (or ice) this week, as far as rebels were concerned. Rafinra's 479 million isk Arazu was smoked by Agent Jim Bobert's Caracal. Jim has been deliberately suspect-flagging himself and then bumping miners with the Caracal, which causes some of the angrier carebears to try fighting back or (more often) asking for help. For some reason, a Mackinaw tried attacking the Caracal with its drones, giving Jim license to kill the Mackinaw. Then Rafinra's Arazu jumped in, attempting to assist, but he died, too. The bumping resumed, as it always will. 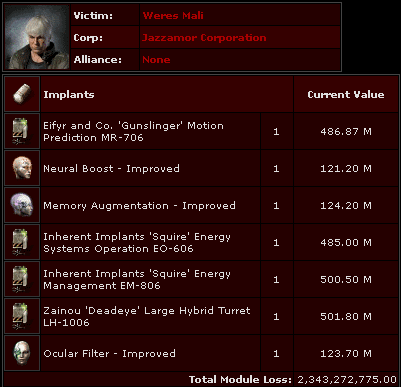 CCP has gone out of its way to make travel easier in EVE. You can warp to stargates at zero without bookmarks, and now you can even jump through the stargate automatically on landing. That's not enough for the bot-aspirants, though. They want everything to be automated. Agent D400 knew something suspicious was going on when he saw Weres Mali's shuttle heading toward a stargate rather than stopping to pay him his due respect. The breach of decorum set Weres back 2.3 billion isk. If you think auto-piloting through my territory saves time, think again.
Posted by MinerBumping at 01:50