Longtime readers of MinerBumping are familiar with the adventures of Agent Lord Mandelor, whose fellow wardeccers have brought justice to many carebears and/or bronies.

After meditating in a wormhole, Mandelor and his fellow Agents increased their concentration and strength a thousandfold. Now they were ready to take on a corp of highsec mining bot-aspirants called leckybaby Corporation.

Carebear-in-Chief Zanthos Stormcloud, leader of the leckybabies, has a mixed military record. The corp's 50 members collectively have a modest killboard efficiency of 0% so far this month. Taking pity on the leckybabies, Mandelor and his fellow Agents in Tengoo Uninstallation Service corp opened a channel with Zanthos and offered to let him surrender. 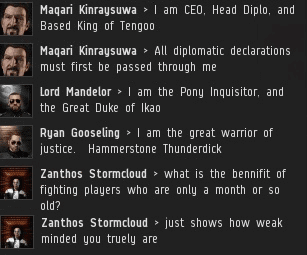 Zanthos slapped away the extended hand of friendship. Hilariously, he questioned the integrity of our Agents and the righteousness of the war. He claimed the entire corp was comprised of 1 month-old players. (Naturally, he'd been CEO of the month-old corp for nearly 9 months.) 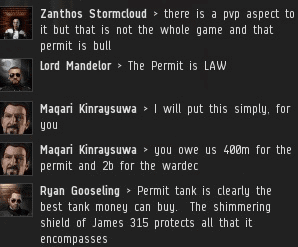 Zanthos had a very different perspective about EVE. It only contains a "PvP aspect". He didn't want any part of that aspect, it seems. Agent Maqari Kinraysuwa decided to let the leckybabies off the hook if they agreed to reimburse Tengoo for their expenses and follow the Code from that point forward. 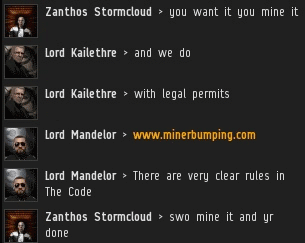 Contrary to common sense, Zanthos refused the offer. He would not yield to the Code that day. It was a decision that would change the leckybaby Corporation forever.

Now all the carebear blood would be on Zanthos' hands. His corporation was 80 members strong, but by the time I screenshotted their killboard earlier in this post, it was already down to 50. leckybabies, like all carebears, flee in terror when confronted by a challenge. Agents of the New Order, on the other hand, fight like lions. Different strokes for different folks, I guess.

Karma in action: At the worst possible time, leckybaby Corporation was attacked from within. An awoxer appeared! 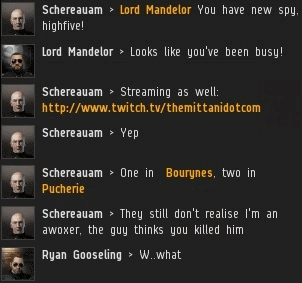 Schereauam was briefly a member of leckybaby Corporation and killed some miners. But the leckybabies didn't see it that way.

Unaware of the concept of awoxing--members of the same corporation are allowed to shoot each other without penalty in highsec--the miners of leckybaby Corporation were convinced that our Agents had been striking them with cloaked ships. 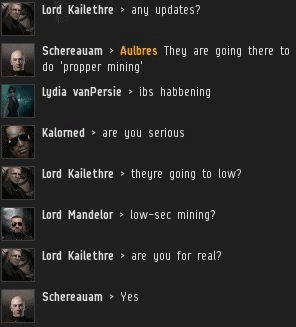 The awoxer reported another shocking piece of intel: The carebears planned to evacuate from New Order territory entirely.

It was a scandal. What would lowsec offer to a bunch of miners who find highsec too dangerous? Our Agents contacted Lauren Williams of leckybaby Corporation and demanded an explanation: 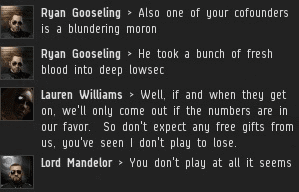 According to rumor, the lowsec mining op turned into a debacle. Lauren explained that the corp was revamping its war strategy. It was a war Lauren and her leckybabies intended to win. There would be no more mistakes, she said. Was she right, or did the future hold even more disasters for the opponents of the New Order?

To be continued...
Posted by MinerBumping at 21:33