Another glorious victory for the New Order! We have sold over 176 billion in shares. That amounts to a ridiculous number of gank ships reimbursed during our ongoing war against the bot-aspirants. Before we get to the Supreme Protector's Tip of the Hat™ portion of this post, I have a few questions about the share-purchasing process to answer. 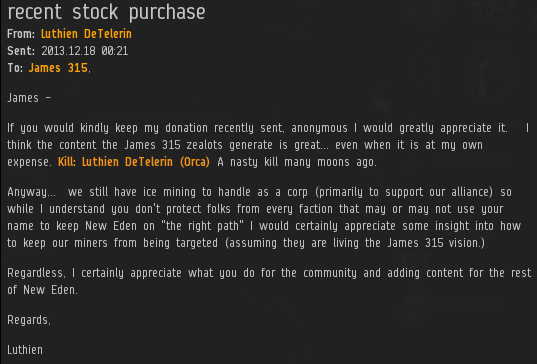 Several months ago, Luthien DeTelerin lost a billion isk anti-tanked Orca while conducting unlicensed mining activity. She's certainly come a long way since then: She sent me 5 billion isk to purchase New Order shares. To answer her question, no, I can't keep her donation anonymous. All ownership of New Order shares is public. On occasion, people have gifted shares to other players, or have designated an alt for holding shares, but otherwise it's all in the open. If anyone gives you trouble about owning shares, take heart that you have the full power of the New Order behind you.

I'm frequently asked whether New Order shares serve a dual function, or whether a shareholder needs to buy a mining permit. The answer is that a mining permit is purchased separately. Today we have an extreme example, where Luthien owns 5,000 shares but does not have a mining permit. I'm a man of the law. Luthien remains, technically, a Code violator.