It is said that fortune favors the bold. I believe it. How else to explain the luck of the New Order? Our Agents are the boldest, most fortunate people in highsec. 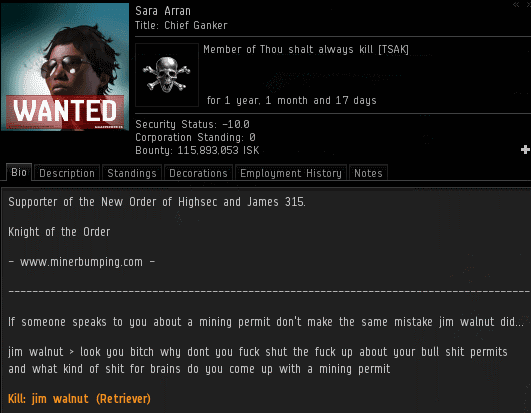 Agent Sara Arran has a long history of enforcing the Code. She believes highsec can be saved. Her supreme confidence in the New Order's final victory is continually rewarded.

As Sara proudly surveyed the fruits of her labor in the Balle system, rebel miner Vladimierr scoffed. There's a skunk at every garden party. 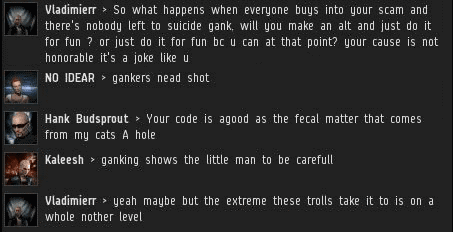 Vladimierr has the same fears as so many other rebel miners. They've watched the profound transformation of highsec over the past year and a half, and it makes them nervous about their future. 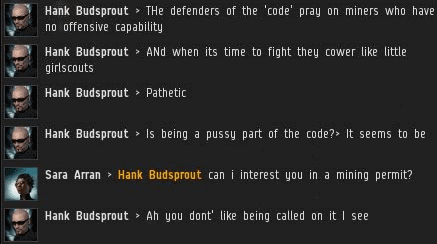 Now it was fellow rebel Hank Budsprout's turn to speak up. He condemned the Knights of the Order for being "dishonourable". Sara maintained a professional demeanor as always. 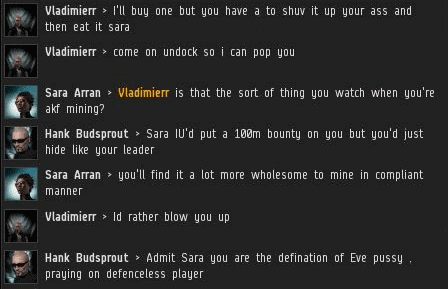 Rebels get rowdy. That's to be expected. But the thing about rebel miners is, they're like walking, talking comeuppance magnets. It's only a matter of time.

Hank warned Sara that one day she would be ashamed of the part she played in the New Order. Unlikely. I've never met an Agent of the New Order who looked upon their Code-enforcement actions with anything other than pride and gratification.

These days, rebels complain about the terms of the Code almost as often as they threaten to use the terms of the EULA against us. With thousands of miners being punished and rewarded based on the Code, it's the law in highsec in a very real way. Vladimierr insisted that he should be able to spend 20 seconds "messing with his cat" at a moment's notice. He didn't want to have to wait to dock up, for some reason. 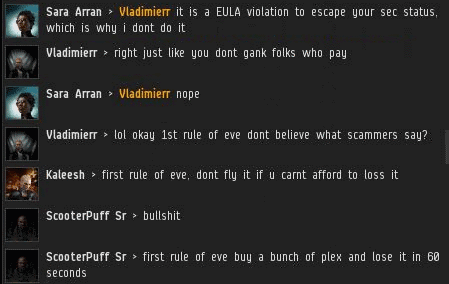 Vladimierr was as bitter and jaded as you'd expect a carebear to be. He saw lies and EULA violations everywhere. He couldn't understand that an Agent of the New Order is the one person in the system you can trust completely.

Hank was getting angrier and angrier. At last, he couldn't stand it anymore. It was time to unleash his master plan and have vengeance upon Sara Arran! 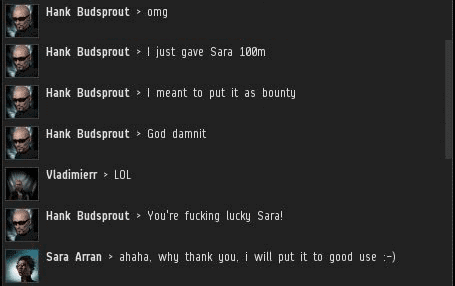 Like I said, fortune favors the bold. Also, a fool and his money are soon parted. 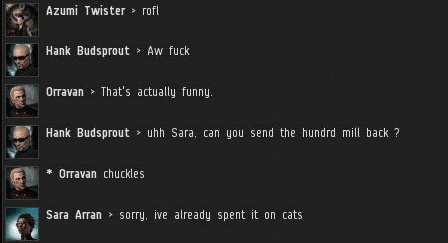 Hank begged his mortal enemy to return the money. It was too late, as Sara earmarked the isk for the purchase of additional cats. Not the kind of cat that you mess with for 20 seconds while mining; the kind of "cat" that you kill miners with.

For the next decade, Hank will be a licensed miner. However, his license could be revoked if he fails to abide by the Code. Let's hope that never happens. Because if there's one thing we've all learned, it's that the New Order always wins.
Posted by MinerBumping at 18:34