I could awkwardly attempt to shoehorn in the following image to the theme of this post, but honestly, I'm just putting it here because I like it. 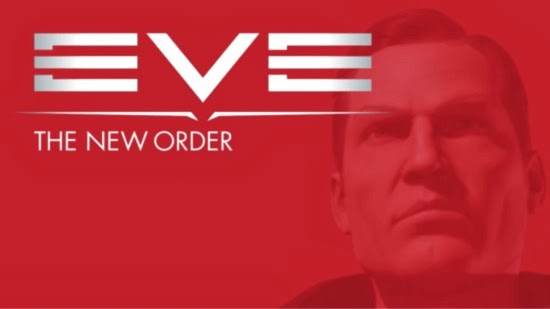 The artist is Lord Kailethre. You can view the full-size banner here. Now let's move on to the topic of today's discussion. How do you mine in highsec and raise small children in a responsible manner? 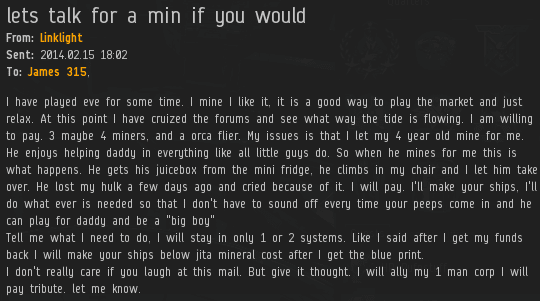 Over the past two months, I've noticed a spike in the number of people complaining about New Order gankers killing their children. If you've been reading MinerBumping the past several weeks, you've probably noticed it, too. (Maybe this is what people mean by "newbies" mining in highsec. We've dealt with "new players" who have been playing EVE longer than Linklight's child has been alive.)

Linklight's EVEmail hinted that he didn't want to follow the "no AFK mining" rule, because his 4 year-old couldn't respond in local. I will not be bribed. It's true that his 4 year-old cried when he lost his father's Hulk, but as I've said before, that makes him no different from any other carebear who loses a ship.

Highsec carebears have such a warped view of EVE. They think the rules should be changed to accommodate 4 year-old players. When was the last time someone stopped a battle in nullsec because someone wanted to let their 4 year-old command the fleet?

I fear Linklight's refusal to follow the rules could be a character defect that he passes down to his child. Criminal tendencies often run in families. And yet, there is hope. All it takes to break the cycle is for one member of the family to embrace the values of the Code. Speaking of hope, check out the next EVEmail: 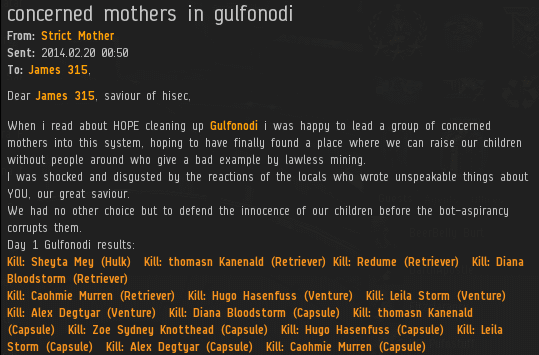 Inspired by another pro-Order corporation, Strict Mother gained the courage to stand up for the Code and clean up her neighborhood. 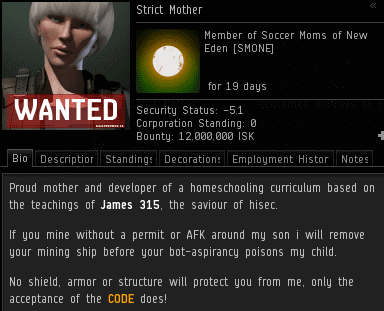 When your child tells you, "But all my friends' parents let them mine AFK," take a page from Strict Mother's book. She's not going to let the culture of rampant bot-aspirancy in highsec destroy her family. Neither should you. 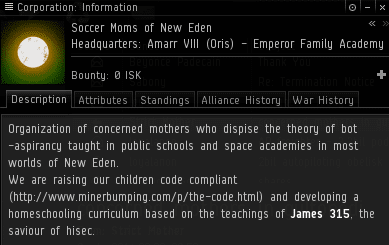 Peer pressure can feel overwhelming at times, but that's no reason to abdicate your parental responsibilities. In any case, antimatter is more powerful than peer pressure.

Among the Code-violators killed by Strict Mother was Hulk pilot Sheyta Mey. Sheyta fell victim to the PLEX-centered lifestyle. Strict Mother wasn't buying it. She centers her EVE career around the Code.

Sheyta, it would seem, thinks she's the second coming of CCP t20. As a former GM, she threatened to use her influence against Soccer Moms of New Eden corp, unless paid 500 million isk. A former GM, eh? I wonder how CCP could have let her go.

You think Strict Mother is going to be intimidated by a former GM? Not likely! You know what the difference is between a Soccer Mom of New Eden and a pitbull? Lipstick.

In closing, Strict Mother asked me to bless the Soccer Mom of New Eden's children and operation. Of course I did. 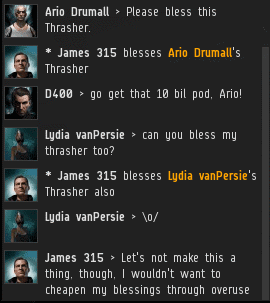 I'm often asked to bless things in highsec. It's flattering of course, and shows a healthy respect for the office of Saviour of Highsec. But the truth is, as Strict Mother showed, the real power is within everyone who has the courage to stand up for what they believe in--assuming their beliefs are consistent with the Code.
Posted by MinerBumping at 20:59