Although the New Order owns all highsec systems and loves them all equally, we hold a special place in our hearts for Halaima, the birthplace of the Code. Agents Lord Kailethre and Lord Mandelor of the Tengoo Uninstallation Service corp felt the pull of nostalgia and paid Halaima a visit. Tengoo pilots flew to Halaima to pay their respects to the Code in local. Everything was fine until this happened: 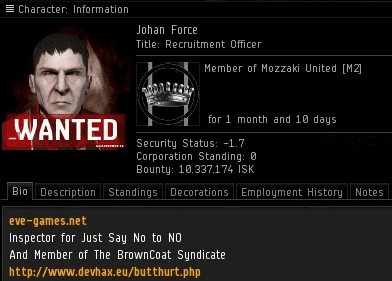 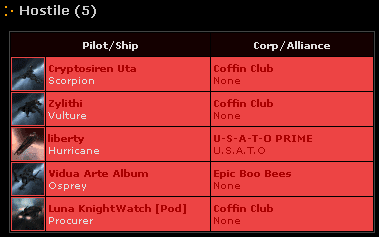 Recently, Liber8eve organized an anti-Order "mining event" in Halaima. For some reason, they thought gathering together and mining in an asteroid belt would somehow impede the actions of the New Order. Instead, their mining op ended in disaster when some pilots of The Pursuit of Happiness alliance crashed the party and activated kill rights on a bunch of Liber8eve vessels. The rebels suffered half a billion isk in losses. liberty herself was counted among the dead.

Following Liber8eve's defeat in Halaima, the rebel blogger vowed to continue, and not to fall silent like all the other failed resistance blogs.

However, the blogger resurfaced to say the blog would go silent again. 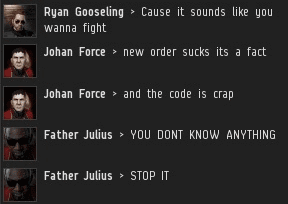 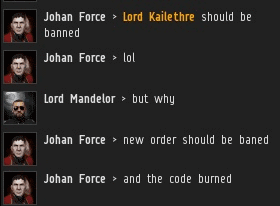 When Johan heard the news, he still wouldn't apologize. BrownCoat that he was, Johan protested against the tyranny of the New Order. Our heroes decided it was time to visit the rest of the Mozzaki United by joining their public channel. 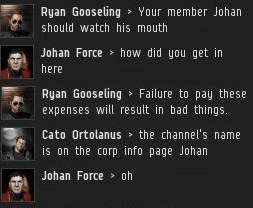 Now the rest of the Mozzakis were on notice. They had 24 hours before the wardec went live. Would they repent? 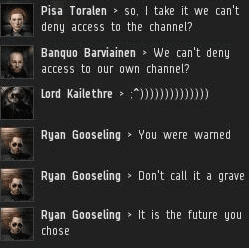 Though the war hadn't started yet, the New Order won its first battle immediately. Mozzaki United proved incapable of kicking our Agents from their channel. 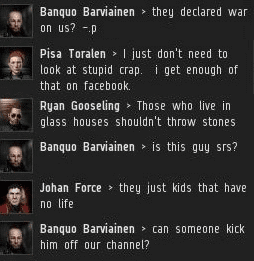 Johan had invited this calamity on his corp. As Mozzaki United struggled to grasp what was happening, Johan tried to cover up his own involvement. But his house of cards was about to collapse. 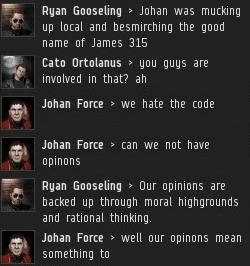 The cat was out of the bag. Johan defended his heresy behind the cloak of "freedom of opinion". The New Order promotes freedom. We love diversity of opinion. Provided it is within the bounds of the Code. Mozzaki United had a chance to denounce Johan, but they did not. The clock ticked down until the wardec activated. 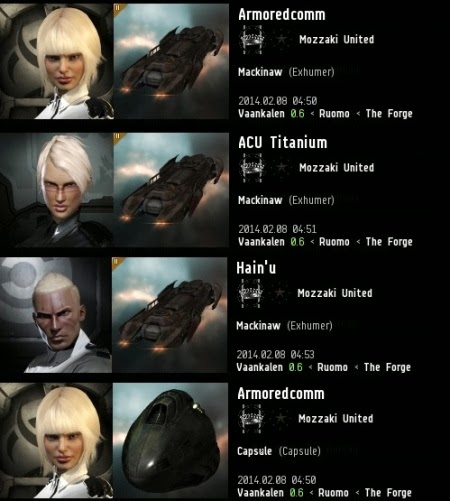 As soon as the war began, Mozzaki learned the dreadful price of defiance. In just a few minutes, they were already down three Mackinaws and 700 million isk. 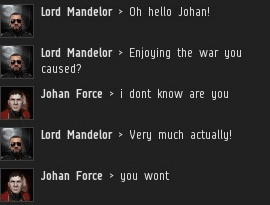 Our heroes spoke to Johan to give him the opportunity to surrender. Johan had other plans. He boldly declared that the war was about to turn against the New Order in a big way. Was it true? Had the Tengoo Uninstallation Service bitten off more than they could chew? Or were things only going to get worse for Johan and friends?

To be continued...
Posted by MinerBumping at 20:05