Fair warning, readers. Some of what you're about to see may sicken you. If you have a weak stomach, this might be a good post for you to skip. Take a day to enjoy some older MinerBumping posts and rejoin us next time. As for the rest of you, the following are some notable kills that took place during the week of February 16th @ 00:00 EVEtime through February 22nd @ 23:59 EVEtime. 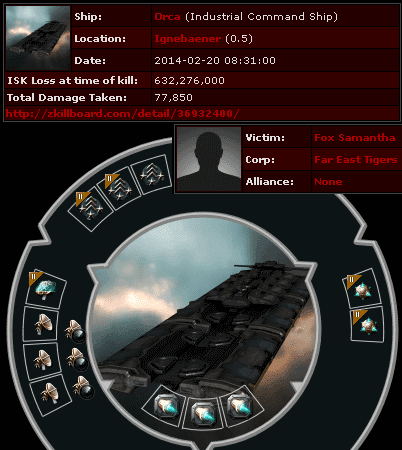 KILLMAIL
Let's ease into this with a nice Orca kill. Fox Samantha lost an anti-tanked Orca whose valuable lowslots were occupied by Inertia Stabilizers for some reason. Maybe she wanted to be able to align quickly in case of a gank. Just giving her the benefit of the doubt. Unfortunately there's no way to excuse her for fitting the very first triple Sensor Boosted Orca I've ever seen--and yes, those are all Scan Resolution scripts for the best possible lock-time. 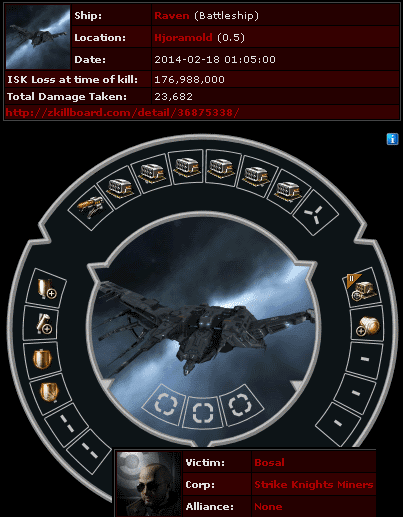 KILLMAIL
Bosal is a member of the Strike Knights Miners corp. Maybe he's dyslexic, because shouldn't it be Knights Strike Miners? Take a guess what Bosal was using this Raven for. Mining? No. Ratting? Missioning? No and no. Ladies and gentlemen, this was actually a suicide gank fit. Bosal attempted to kill Agent Alyth Nerun, who was minding his own business bumping miners and telling them what to do. Bosal attacked Alyth without provocation and got CONCORDed for his trouble. I don't know what they're putting in the ice these days, but it seems every week we see a new "Worst Gank Fit Ever" kill. 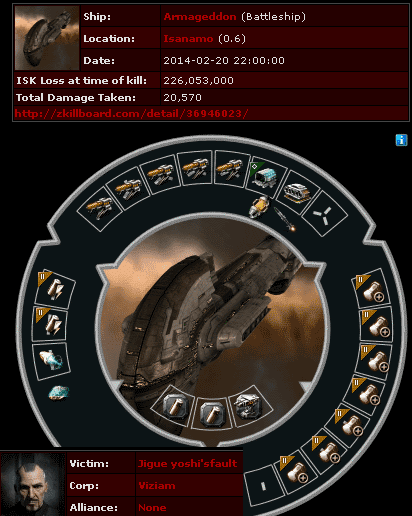 KILLMAIL
Starting to feel a little nauseous yet? Jigue yoshi'sfault had no one but himself to blame for this mining Armageddon fit. In case you're curious, that rig is a tracking enhancer for large energy weapons. Jigue, I don't think a mining laser counts as an energy weapon.

Recently we had some rebels telling people that they can defeat the New Order by mining in battleships. Agents loyalanon, Jared Lennox, Throatslashar, iZaEaRl, Sophia Soprano, Belana Mawr, and Gank Gank weren't defeated, but they were disgusted by the bot-aspirancy of it all. 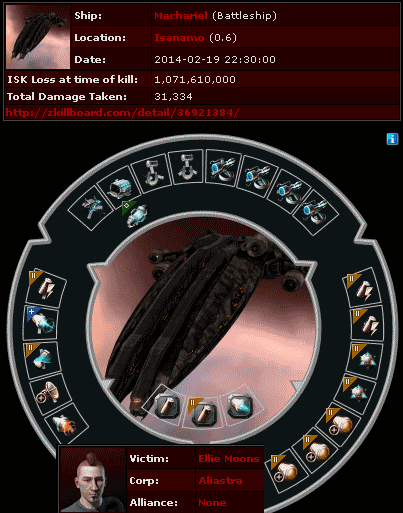 KILLMAIL
Our Agents were notified that Ellie Moons had gone AFK next to a stargate in a Machariel. Ellie's fit may mystify you. I'm guessing it's for scanning and bumping freighters. Hey, I'm all for freighter ganking. Bot-aspirants often fly freighters. But Ellie didn't have a permit, and he was just as guilty as any freighter pilot of assuming no one could touch him while he was AFK in New Order territory. You can accuse the New Order of many things, but not hypocrisy. 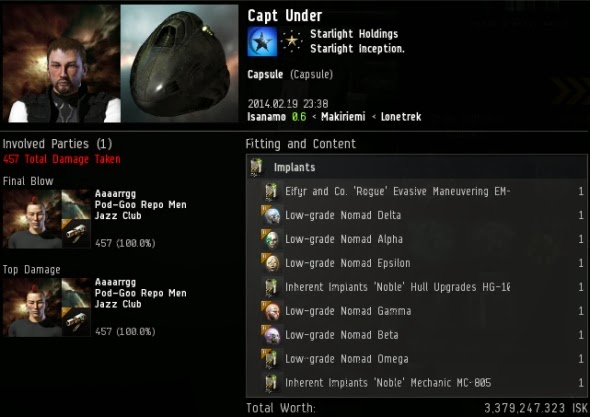 KILLMAIL
Capt Under lost 3.3 billion isk worth of implants when Agent Aaaarrgg popped him. You know the drill--Capt Under was AFK autopiloting. Not in a shuttle, though. He was autopiloting in a freighter. Our Agents took care of that, too. 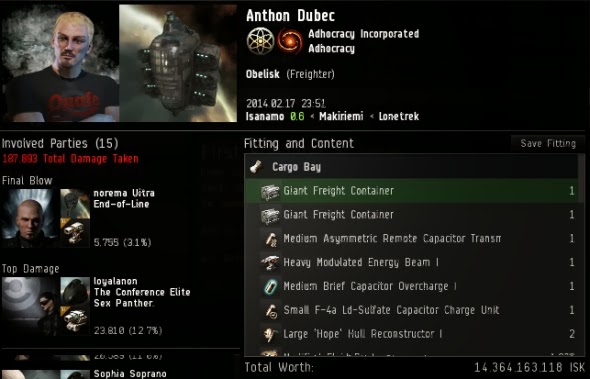 KILLMAIL
You know how I said earlier that our Agents support freighter ganking? Anthon Dubec learned it the hard way. He put everything he owned--over 14 billion isk worth of possessions--into a freighter. He promptly went AFK. No sir. Not in my highsec.

Agents loyalanon, DiaLatho, Maestro Ulv, Sarthana, Sophia Soprano, Desmond Strickler, Aaaarrgg, Pod-Goo Repairman, Jared Lennox, iZaEaRl, Nanny State, Throatslashar, Luck Of-The-Irish, norema Uitra, and Santisma Muerte rallied for yet another spectacular attack this week and set Anthon back to square one. Assuming he doesn't quit EVE, maybe in his next career he'll choose to play the game in a manner that respects the Code--and not in a manner that ignores it.
Posted by MinerBumping at 02:39