The Pride of Highsec

Everyone knows about the standard bios you see in EVE: Damage types to use against different types of NPCs, the conversion of AUs into kilometers, and the like. Since the dawn of the New Order, an increasingly common type of bio is the mining permit. Agents of the New Order often have their own specialized bios, as well. They aren't utilitarian, like the "damage type" bios. New Order bios are worn with pride. 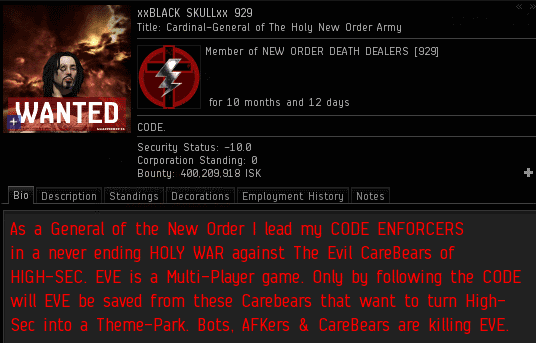 Agent xxBLACK SKULLxx 929 is the CEO of the NEW ORDER DEATH DEALERS corp. Carebears often send him complaints when members of NODD punish them for their bot-aspirancy. It's not surprising that an isk-obsessed miner would be angry about losing a ship. However, they're even more sensitive than that. The mere sight of a pro-Order bio is enough to provoke them. Witness, for example, an EVEmail with the subject line "Reality Check" from Ta'Shima Shaishi. She had a bone to pick with xxBLACK's bio, which demonstrated his love of the Code.

Ta'Shima was not happy with xxBLACK's bio. Nor was she happy with the NEW ORDER DEATH DEALERS corporation description: 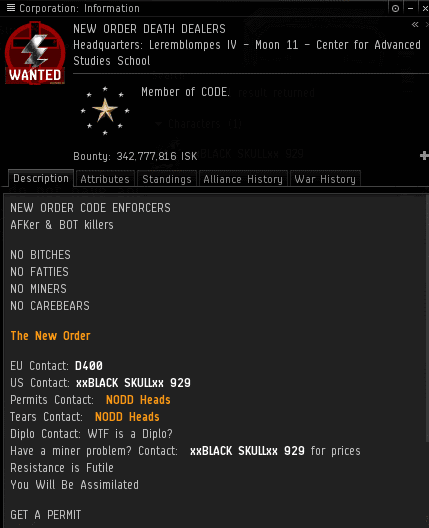 Frankly, I'm amazed that anyone would have something bad to say about this. But Ta'Shima wasn't finished...

When I glanced at the reference to P.J. Wodehouse, I was intrigued. Was a miner breaking new ground, comparing us to something other than Hitler? It was time for a Wikipedia check on this Sir Roderick Spode character. 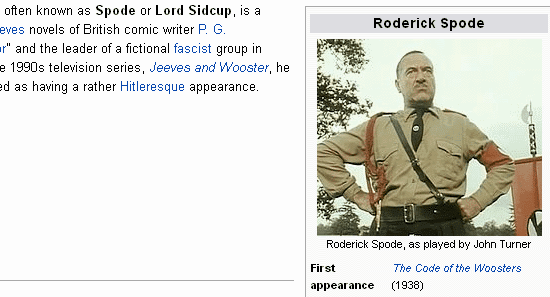 Alas, disappointment. It was just another dressed-up Hitler reference. A good effort, though.

The Agents of the New Order are fearless. They support the Code and don't care who knows it. As we march forward from victory to victory, more and more highsec residents are taking a stand for the Order. It's not difficult to imagine that in due time, every man, woman, and child in highsec will have a pro-Order bio of some sort. Imagine, a 100% Code-compliant highsec! Isn't that a wonderful thought?
Posted by MinerBumping at 18:43