They're Coming for Us

You might not see any evidence of it in-game, but there is still an active anti-Order resistance movement. At least, that's what they tell us. Carebears only "resist" via EVEmail.

Haywood Jablowmee Allthatime sounded totally convincing when he told me that he and his friends would come to destroy the New Order. We often receive correspondence from people like Haywood, people with a remarkable level of confidence and certainty. This made me wonder: Do any of these people actually make good on their threats--even a little bit? I decided to investigate.

My investigation took on a very simple form. I gathered EVEmails from people who recently threatened to take down me or the New Order, then cross-referenced them with public killboards to see if they ever got any New Order kills. On occasion, a miner automatically gets on a ganker's CONCORD mail when his mining ship is blown up, due to auto-aggressing drones. So for the purposes of this investigation, kills only count if earned after the EVEmail was sent.

So it began. Haywood, critix Beddelver, and RAPID FALCON were the first to be investigated. 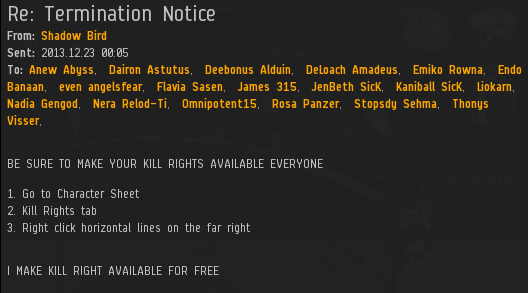 Shadow Bird tried to organize an improvised resistance by telling other dead miners about the benefits of having kill rights on -10 characters. Maybe he thought his job was done after giving the advice. He's an idea-man.

I honestly think CCP needs to put something about kill rights in the EVE tutorial. Way too many highsec residents are confused about how they interact with security status. Almost every time I undock Currin Trading, who has -10 sec, I'm notified that someone activated a kill right on him. 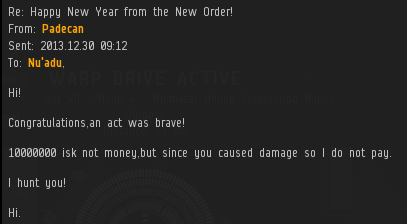 I wonder if any of these people who say they'll "hunt" us even know how to use locator agents. 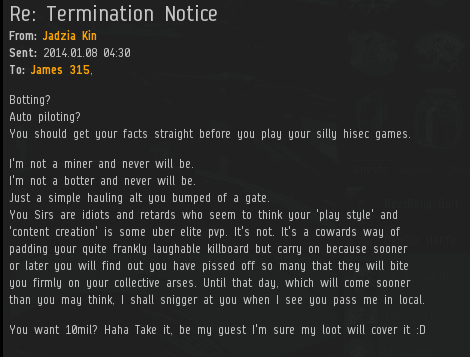 This EVEmail was a little ambiguous. I suppose, to be fair, that Jadzia Kin meant that "someone else" would defeat us. I checked on her, too, just in case she decided to get more proactive. 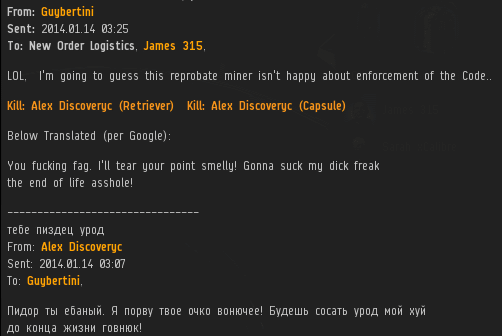 I assume "I'll tear your point smelly" was an in-game threat. After all, tearing someone's point smelly in real life is a crime.

Maybe the miners "hunt" us the same way that politicians say they're "hunters" when speaking with gun enthusiasts.

caunt Osa insisted he wasn't a highsec miner; he was a valiant PvP'er. I double-checked the killboard, just to make sure.

I know my history. Every new order fails--until one doesn't.

Honestly, I was disappointed by what I found. I hoped one of the carebears would at least get on a CONCORD mail or something while failing to prevent a gank. No dice. They didn't even go that far. We sacrifice thousands of gank ships each month, but these carebears won't help us out by destroying even one? You know, I think I'm starting to see why these resistance movements always fail.

Despite my disappointment, I invite the carebears to turn their lives around and join the New Order, so they can learn how to get kills. We can teach even the most bot-aspirancy-ridden miner to hunt the finest game in highsec: Their fellow carebears.
Posted by MinerBumping at 19:17