With daily New Order triumphs in highsec, anti-Order rebellion has been forced to go deep underground. So deep, in fact, that it's quite difficult to detect their existence. But the New Order's intelligence capability is so powerful that it can even breach the security of nearly-defunct resistance movements. 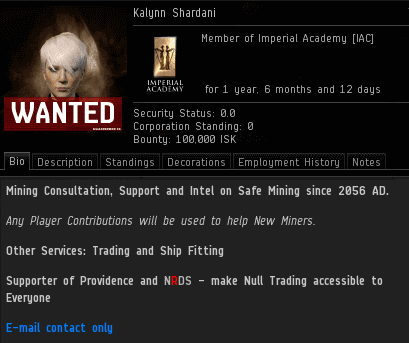 One of our Agents has discovered an anti-Order network created by Kalynn Shardani, a so-called "mining consultant". You might be inclined to ask, "How bad do you need to be at EVE to require a consultant to help you mine in highsec?" Well, actually... Yes. I suppose that's a good question.

Kalynn's anti-Order intelligence network consists of spamming large numbers of miners with EVEmails. We have intercepted such things before, from other rebels. Kalynn's emergency broadcast alerted the miners in the Lonetrek region to the presence of a ganker named Spine Ripper. We know Agent Spine Ripper well. She is the ganker alt of Agent Bing Bangboom, and a brave Knight of the Order. Why was Spine Ripper so important as to warrant a detailed broadcast? Because when you're powered by the Code, everyone takes notice. It's instant fame, and unlike many of today's celebrities, the fame is earned for doing good.

Kalynn urged her fellow miners to abandon their high-yield, high-storage mining vessels in favor of tanked Skiffs and Procurers. Rebel miners sometimes claim that the New Order makes no difference, but forcing miners into better ships and substituting yield for tank sounds like a difference to me.

I'm happy to see Kalynn specify that Damage Controls and active tank mods should remain active, rather than inactive. You'd be surprised how many miners don't know this.

Facts: Kalynn doesn't know what she's talking about. The Code and mining permits were created for the well-being of highsec, and have nothing to do with scamming, threatening, or harassing miners. Controlling them, yes.

The big "what can you do" section is the most disappointing part of the EVEmail. Their big idea is kill rights. Sigh. Kalynn encourages miners to help out the noobs. If you can find an actual noob who mines in highsec, let me know. The "noobs" we're coming across tend to be a bit long in the tooth.

In conclusion, Kalynn counsels her fellow rebels not to reinforce New Order Agents' "illusionary belief that they matter". Yeah, because writing a multi-page warning about a ganker and EVEmailing it to everyone in sight isn't going to make him feel important. 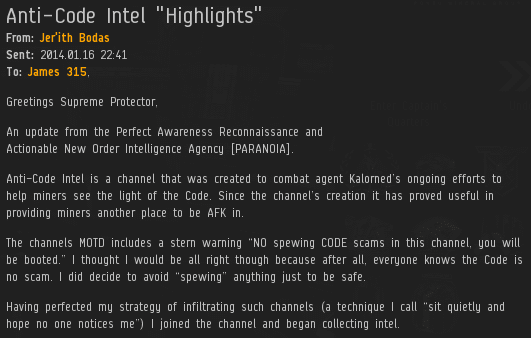 Bonus! At the same time as the New Order was intercepting anti-Order EVEmail blasts, Agent Jer'ith Bodas masterfully infiltrated (i.e. joined) an anti-Order intel channel called Anti-Code Intel. Once inside, Jer'ith was in a position to find out what's really going on inside the minds of these rebels.