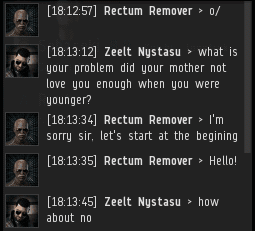 It was a day like any other. A New Order Agent, Rectum Remover, had just podded a bot-aspirant, Zeelt Nystasu. Everything was in its right place. Until... 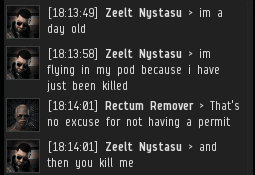 Zeelt claimed to be a day-old noob. Now, we've dealt with a lot of people claiming to be noobs. Critics of the New Order often accuse us of doing nothing but picking on noobs. Yet, so far, nearly every "noob" has turned out to be a three year-old character, or a "new player" who joined in the game in 2007, or some other sketchy nonsense. 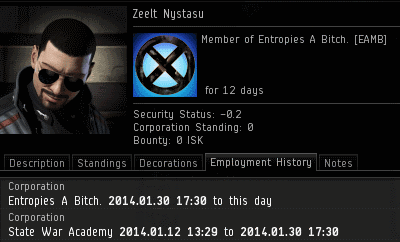 Shockingly, at the time these events took place, Zeelt really was a one day-old character! (Actually a two day-old character, but who's counting?) Could it be? An actual noob ganked by the New Order? Without any of that noob-but-not-really stuff? An honest-to-goodness, true blue noob? 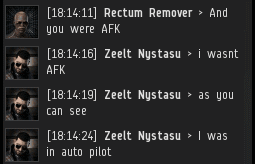 Rectum was willing to have an open mind about the whole thing, but he presented his case: The noob was clearly AFK autopiloting; his pod was slowboating to the gate. He even admitted to autopiloting. 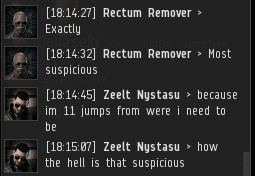 Zeelt insisted that he was at his keyboard. He said he was autopiloting only because he was 11 jumps away from his destination. This made Rectum very suspicious. Autopiloting in a pod makes the journey take much, much longer. If you're at your keyboard, why would you do that? 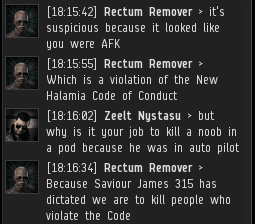 Rectum made no bones about it: His job was to uphold the Code. There is nothing in the Code that does not apply to noobs. When you sign up for a trial account, you get two weeks of EVE free. You don't get two weeks of Code violations for free. Bot-aspirancy is not part of the deal.

Out of nowhere, the other shoe dropped. Zeelt put a 50 million isk bounty on Rectum and called him a "noob". Until now, it looked like we might have had a genuine noob on our hands. But then came precisely the kind of sketchy nonsense I was talking about before. 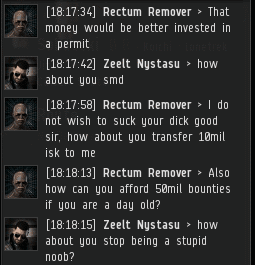 A day-old noob who has 50 million to blow on a pointless bounty? A brand-new player who repeatedly calls other players "noob"? Carebear apologists, you'd better cancel that photo shoot--I think there's something wrong with your new poster child. 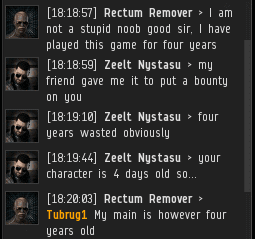 Zeelt claimed that his "friend" gave him 50 million isk to put a bounty on someone. Where did this "friend" come from, and why didn't the "friend" put the bounty on Rectum himself? Then came another plot twist: 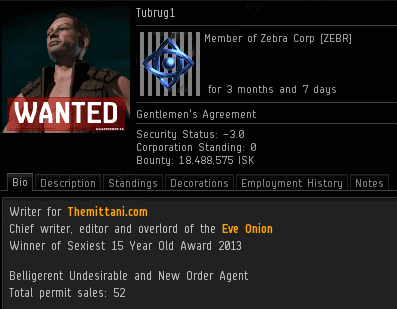 Agent Rectum Remover was actually the alt of Agent Tubrug1, one of the first Agents of the New Order and a man of impeccable character. By playing on a four day-old ganker alt, he'd lured Zeelt into calling him a noob. Another victory for the New Order!

For a day-old noob, Zeelt sure learned how to work the petition system in a hurry. He reported Rectum as an "ISK scammer". Zeelt was so precocious! Usually carebears spend at least a few months in the game before they start training up their Space Lawyer skills.

Interestingly, Zeelt was also advised by his "friend" that mining permits didn't exist. Seriously, can we talk to this friend? What's next, Zeelt saying, "Hello! This is Zeelt Nystasu's father talking. Forgive him for behaving so foolishly"? 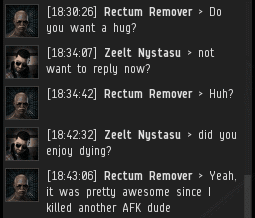 The conversation broke down as Rectum's aggression period expired and he had to turn his attention toward ganking another Code-violator. Perhaps one day he will gank a true noob. Until then, it will be three year-old "new players" and day-old "noobs" with mysterious friends and money to burn on bounties.
Posted by MinerBumping at 19:20