Some people say the New Order is a bunch of griefers. That's a funny thing to say. None of our Agents "grief"; I'd love to see evidence to the contrary. However, sometimes our Agents grieve for the miners. They look upon the carebears' plight and are deeply moved. 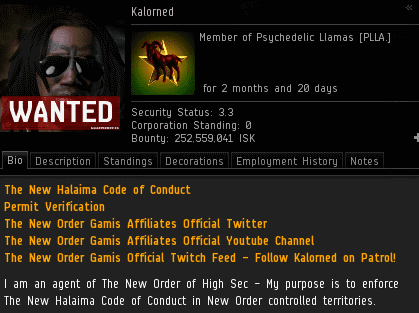 Agent Kalorned sent me a field report from the Gamis area. His pity for the miners practically leapt from the digital pages.

Enforcing the Code can be a very emotional experience. Seeing signs of bot-aspirancy all around him, Kalorned ached. But then he put on his game face and went out to do battle like the warrior he is.


Kalorned > Good Evening Jermiah Johnson, you are currently mining in violation of The New Halaima Code of Conduct http://www.minerbumping.com/p/the-code.html - I will now bump you from the belt until such a time that you become compliant.
Krominal > Kill: Jermiah Johnson (Hulk) Kill: Jermiah Johnson (Capsule) Mining AFK in New Order space is not permitted
hillbilly kid > wasnt afk...
Kalorned > You failed to respond to my greeting
hillbilly kid > i didnt know who the fuck you are.
Professor Kaku > ignoring dicks does not equate to afk mining.... get a grip... get a life.... earn your own isk :)

Jermiah/hillbilly didn't know who Kalorned was before, but he knew now. Protip: If you're mining and someone claiming to be an Agent tells you to do something, you should probably do it.


Kalorned > I very clearly identified myself as an agent of The New Order of High Sec
Kalorned > what more is there to know
Mordon Kai > "you are currently mining in violation of The New Halaima Code of Conduct" AKA: pay me or get blown up coz im a jerk like that
hillbilly kid > i dont recognise any new order.
Kalorned > You should really start
Kalorned > 350m in losses is a very real thing
Kalorned > You could have avoided it by responding and becoming compliant
Mordon Kai > "a better high sec for all" would be for morons like you to get lost forever in null

Rebel miners don't accept our authority, but antimatter bullets don't need acceptance to penetrate a miner's hull. Denial is no substitute for compliance. Unless you want to be like one of those bots whose capsules keep going back and forth between the belt and the station after they get blown up.


Kalorned > Think of it like a tax
Kalorned > Its not blackmail for your country of choice to make you pay taxes or go to jail
Mordon Kai > yeah... its that "our space" ... if u wanna lay claim to "this space" go to null and lay a claim there... as far as i know this ia ammatar space
Kalorned > We let the ammatar have it as a formality- they get to pay all the bills
Kalorned > The New Order of High Sec are the real controllers of the space though

Fellow rebel Mordan Kai butted into the conversation and demanded the New Order go to nullsec, where sovereignty can be claimed. If you're a MinerBumping reader, you know what I would say to that...


Kalorned > It's kind of like Renters vs Parent alliances
Kalorned > Sure, technically brothers of tangra has sove of some 0.0 space
Kalorned > but in reality, the space is owned by Pandemic Legion
Shinbreaker > you guys have no Idea what a war actaully is so go null and how bout you find out
Mordon Kai > keep dreaming. i can garantee 100% you'll never get me to "pay for a permit to mine" IN HIGHSEC
Kalorned > Maybe not now
Kalorned > But were in this for the long haul
Kalorned > It's a marathon, not a sprint

Armed with the wisdom of the teachings of MinerBumping, Kalorned easily won the debate. The educated highsec resident knows that the majority of territorial claims in nullsec don't correspond to in-game sovereignty. The same holds for highsec, which is 100% New Order owned.

You can tell an Agent is an experienced bumper if he goes after the Skiffs. It doesn't matter how many hitpoints a Skiff has. The "permit tank" is the proper way to guard against EVE physics.


Kalorned > Good Evening Reid Morrison, you are currently mining in violation of The New Halaima Code of Conduct http://www.minerbumping.com/p/the-code.html - I will now bump you from the belt until such a time that you become compliant.
Reid Morrison > thanks for the fraps video, see you on ccp petition
Kalorned > Friend, you lack a mining permit
Kalorned > I had no choice but to bump you out of range
Reid Morrison > I'm not your friend, i even don't know you
Kalorned > Everyone is my friend, friend

Reid did his best impression of Rodney King and started filming our Agent bump the non-compliants. By all means, miners should do this. If you're going to waste a GM's time with a frivolous petition, you may as well make it a multimedia experience.


Krominal > Kill: Josy White (Retriever) Kill: Josy White (Capsule) Mining without a permit in New Order space is not permitted
Reid Morrison > should i know be scared?
Kalorned > There is never reason to be scared
Kalorned > The New Order is here to help
Professor Kaku > he has to be polite... its part of his legal fidgeywidgeyness... however when people like me have sufficient evidence to back up the fact it is indeed discrimination, harassment and exploitation of new players (mainly) as they dont even adhere to their
Professor Kaku > own rules/stipulations
Kalorned > Why I never 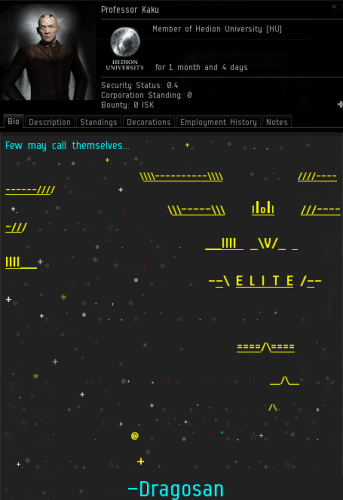 This is what passes for a bio in the modern world of bot-aspirancy? No thanks. I'd rather stick with a good, wholesome "I pledge my loyalty to James 315, the New Order, and its Code..." Some things are traditional for good reason.

Having cleaned the mean streets of Gamis, Kalorned moved on to Juddi. What he found there would test his training to the limits.

These weren't just any highsec miners: formerjunkie declared himself a 2005 player. With 9 years of highsec mining experience under his belt, he'd learned a thing or two. Things were about to get real.