The legitimate EVE players in highsec pumped their fists with joy when they heard about the New Order shares bought up by members and affiliates of Halaima's Omniscient Participation Enforcers corp. Naturally, everyone wanted to hear more about HOPE. 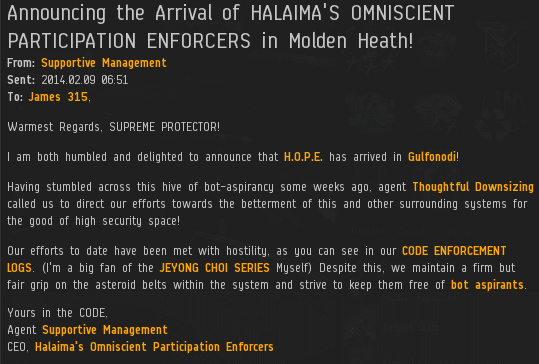 Pro-Order corporations have been popping up all across highsec lately. Among them is HOPE. 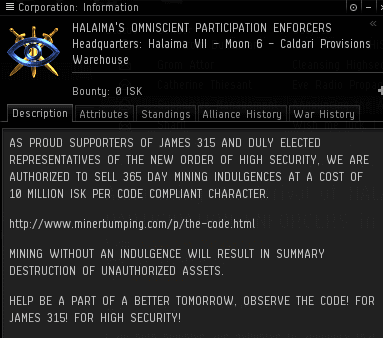 Rebel miners have been astonished and dismayed to see the Code catching fire. As the New Order spreads, it won't be long before there isn't a hole in highsec they can crawl into without an Agent coming to visit. 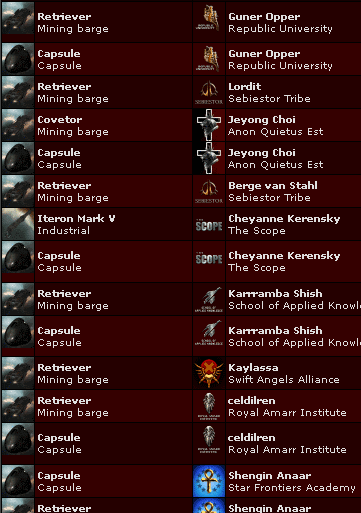 HOPE settled into the Gulfonodi system of the Molden Heath region. There were numerous bot-aspirants there, some of whom were refugees from enforcement actions elsewhere in highsec. They were surprised by HOPE, which began slaughtering them by the billions of isk. 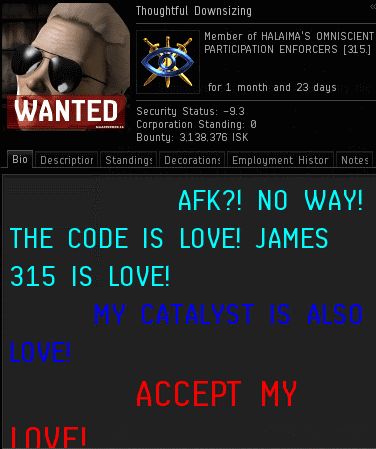 The bot-aspirants quickly realized that these new Agents were 110% committed to the Code. One of the exploded miners, Jeyong Choi, was puzzled by the expression "James 315 is Love". He started asking around.

Jeyong posed his question to Notenough Minerals, an affiliate of HOPE. Notenough was happy to give Jeyong a full run-down of the Code.

Unfortunately, Jeyong replied with a self-described "rage mail". He claimed poverty. Notenough reminded this "new player" that he was five years old.

We're getting a lot of "new players" these days with old accounts, all of whom just happened to start playing EVE again recently. This claim is unverifiable, of course. Nor is there any reason to believe people suddenly got excited about highsec mining a few months ago and started re-subbing for it en masse.

Jeyong continued to send hostile EVEmails. Apparently he was convinced that his odds of being "reimbused" increased with each mail.

Notenough was kind enough to keep giving Jeyong helpful replies. The replies were much more valuable than reimbursement of Jeyong's ship and implants. Notenough even informed Jeyong about the word "trebeled", which is found both in the Code and in the dictionary, so you can be doubly sure it's a real word.

Not everyone hits the ground running when they're told about the Code. Some are sluggish. But in the long run, they all pay.

With the growth of the New Order, there are so many Agents for the rebel miners to learn from. In time, there will be more Agents than bot-aspirants! 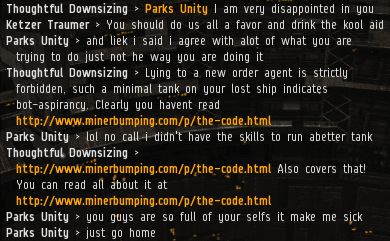 One rebel, Parks Unity, still felt the sting of having his Retriever ganked by a laser Badger. Agent Thoughtful Downsizing gave him some counseling and threw some links to the Code in local. Ideally, every system in highsec will have a ready link to the Code placed in local. Until the day of final victory arrives, highsec will have HOPE.
Posted by MinerBumping at 19:46