Sometimes I wish I could broadcast a picture of my face and a few words of advice every day on the EVE login screen. Not because I have a big ego or want to increase my already-great fame; I could care less about that sort of thing. I just want to force-feed some helpful tips to the carebears of highsec. For starters, don't go AFK in an untanked ship. Especially without a license. Let's find out what happened to some people who didn't take this advice during the week of February 2nd @ 00:00 EVEtime through February 8th @ 23:59 EVEtime. 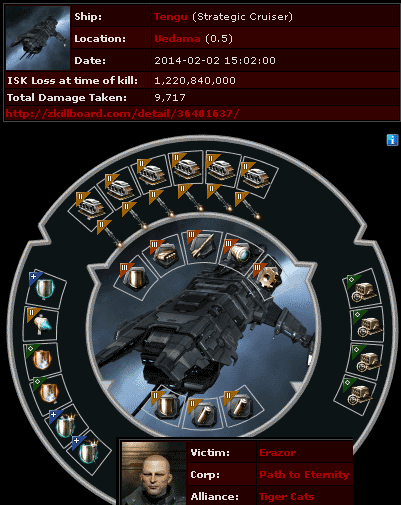 For some reason, Erazor spent 1.2 billion isk on a ship, just so he could fire some silly missiles in my highsec. Erazor went from eccentric to downright zany when he decided to go AFK in said ship while sitting in the Uedama system. That's like waving a flag in front of a bull. Agent D400 blapped him with a Tornado and that was that. 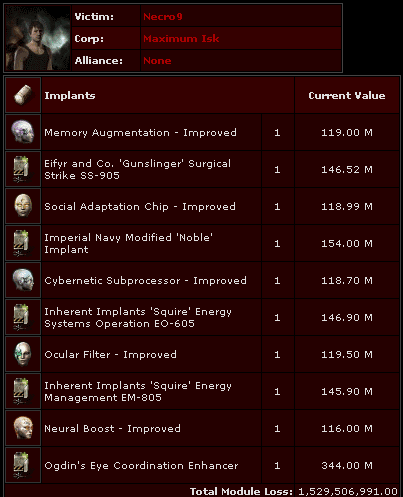 It's possible that the carebears are learning not to AFK autopilot with expensive implants: Necro9 lost the pod of the week, worth only 1.5 billion isk, to Agent D400. It could've been luck, though. I guess we'll find out next week if the Michi crowd is still out there. 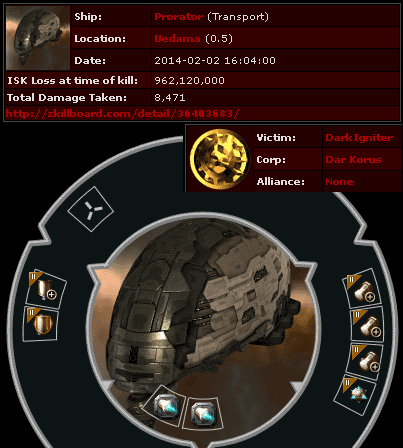 Transport is the theme of this week's Kills of the Week. DarkIgniter filled a cloaky hauler with nearly a billion isk worth of cargo--and didn't bother to use or even fit a cloak. Agents D400 and Ario Drumall saw his anti-tanked piñata and popped it without hesitation. 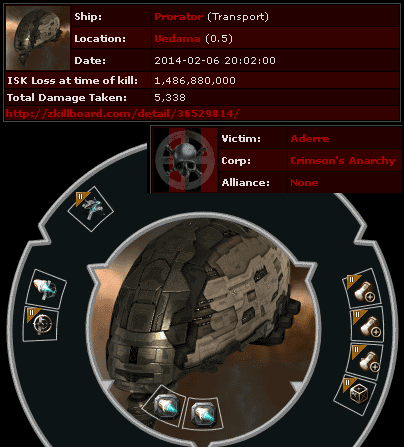 Aderre also had a cloaky hauler, worth nearly 1.5 billion isk. He had the presence of mind to fit it with a cloak, and a microwarpdrive and an ECM burst, too. Here's the problem: You can't use any of those three things when you're AFK autopiloting.

Fun fact about "Transport" class ships like the two Prorators featured this week: They're immune to cargo scanning. Why? Because highsec carebears wanted it. If a hauler gets caught in lowsec or nullsec, they're killed regardless of cargo. Only highsec gankers make a decision to attack or not based on the value of the cargo. 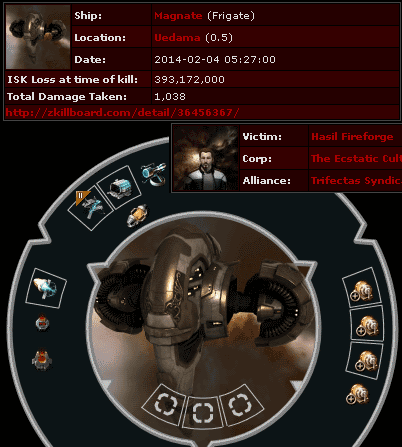 There's more than one cringe-worthy way to lose your cargo while autopiloting. Hasil Fireforge got a tech I frigate and slapped a bunch of warp core stabilizers on it, and filled it with nearly 400 million isk worth of cargo. I have nothing against warp core stabs, except it's hard to warp away when you're AFK. Agent Ario Drumall promptly sent this carebear to the abyss. 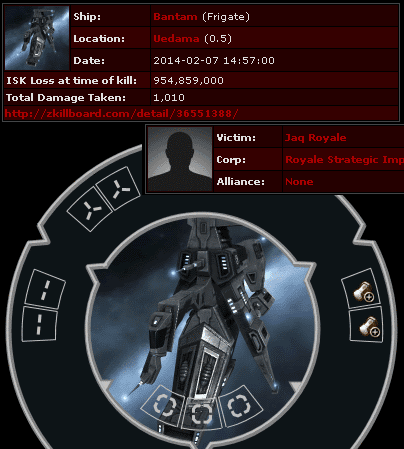 Like I said, it was quite a week for the AFK haulers. Jaq Royale took the cake when he filled his anti-tanked Bantam frigate with nearly a billion isk of cargo and sent it off to its doom. In case you haven't noticed, Ario Drumall has made quite a splash in his first month as an Agent of the New Order. He was responsible for this kill, as well.

Adding insult to injury, much of the billion isk cargo consisted of clothes. If only the Bantam pilot gave as much thought to his fitting as he did to his clothing. But fear not: 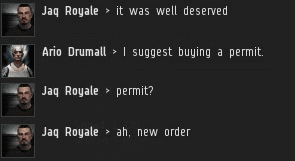 Underneath his bot-aspirant exterior, Jaq Royale proved to be a Gallant-aspirant. He immediately congratulated Ario on the gank. He already knew about the New Order and its Code, of course. He just needed a little one-on-one coaching from an Agent. 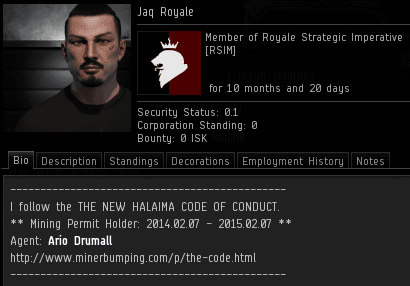 Ario managed to kill and save the same person on the same day. Ario understood that Jaq Royale was worth saving. All the carebears are worth saving. Highsec is worth saving. That's what we're here to do.
Posted by MinerBumping at 02:49