Drip... drip... drip... Those teardrops you hear can only mean one thing: It's time for another edition of the Highsec Miner Grab Bag!

"Happy Asteroid Ltd" indeed. I appreciate the postscript explaining that his EVEmail was in reference to that whole New Order thing I've been doing. No wonder so many miners have been angry with me for the last year and a half! 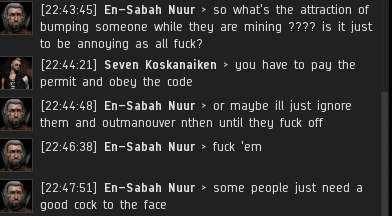 En-Sabah Nuur has his own ideas on what will satisfy the New Order. I would recommend miners not try to get creative. The 10 million isk for a permit will be just fine.

It's not often I have to break out the Gray Pen, but NAVATORON was one of those miners who needs to be protected from himself. He criticized Agent jipjipjip beepbop for "hiding in his computer". Friend, my Agents are everywhere, but they're not literally inside computers.

In case you thought it was a verbal slip-up, NAVATORON confirmed that he thinks our Agents are hiding inside "computer boxes".

I guess NAVATORON thought he would fare better in a 1v1 duel in real life, so he gave Agent Boarat Saagdiyev his name and address to help them meet up. NAVATORON claims to be a musician. I don't know what genre he performs, but a lot of highsec miners like to sing the blues.

Groping for a metaphor, Raven Madder went for "afterbirth of a lesbian clusterfuck". Could this be the name of a powerful new nullsec coalition? I don't know if a "lesbian clusterfuck" would result in birth, but they're doing amazing things with science these days.

Zabian Black was podded in highsec by a member of CODE. alliance, but he thinks I presume too much. Some people need to be more careful about correcting me. It's usually a waste of their time.

Suspected botter and confirmed bot-aspirant Ark Zxr says you can get banned for accusing someone of botting without proof. He must be referring to some secret "I'm Rubber, You're Glue" clause in the EULA.

"Frightening night of his mug"? Weird. Most people rather enjoy my mug.

Aleks Petrov, I don't need to hear your life story. Every carebear's got excuses for violating the Code. Now let's start writing the chapter of your story where you follow the rules.

I need to get out to Chicago more often. I had no idea the city goes by the New Halaima Code of Conduct.

We have a lot of fun with the Goofuses, but it's always nice to read an EVEmail from a Gallant, isn't it?
Posted by MinerBumping at 19:06