Sometimes it feels like carebears are all the same. They look the same, act the same, and even say all the same things--see Miner Bingo. This general truth obscures the fact that if you look very closely, you can find evidence of remarkable diversity among the carebears. Fun fact: No two miner tears are exactly the same.

Many carebears are blunt and straight to the point. They cannot stand to write more than a few words. Those few words are all they know. 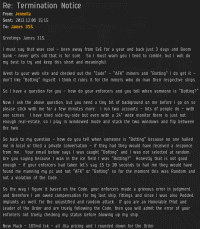 The first essay comes from Elgorand Narcalen. Like so many others, Elgorand compares the New Order to something. The New Order and its Code have been compared to many works of fiction, and I believe this is the first "Lord of Light" comparison, even if it appears obvious to Elgorand. A better analogy might be the Night's Watch, brave warriors who come from all over to selflessly stand guard over the civilized world, protecting humanity from the bot-aspirants--or whatever.

Elogrand spoils the novelty of his theme by jumping directly to the tired Nazi comparison. We can also instantly see Elgorand is a liar, since true outlaws cannot cloak in highsec.

Interestingly, this person claims to have fought in nullsec all the way back in the days of the Band of Brothers alliance. If true, why become a highsec miner now? Another "new player" for the carebear apologists to protect, I suppose. Ironically, the essay concludes with an invitation for me to go back to nullsec.

Speaking of "new players", our next essay comes from Jennella. One of the ways highsec miners like to recast themselves as helpless newbies is to say they're new because they recently re-joined EVE. Jennella is actually a 2009 character--just another new player with over four and a half years under her belt, not counting breaks. She hasn't quite made it out of highsec yet. Still building up cash reserves, no doubt. Lowsec must be so expensive. I bet everyone who lives there is rich. 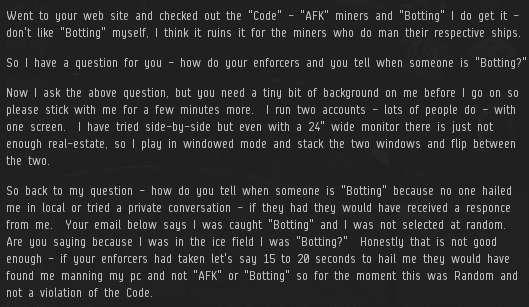 You'd be surprised how many carebears try to argue the Code to me. Protip: Don't bother--I practically wrote the darned thing! Jennella swears she wasn't botting, but she declines to address the charge of bot-aspirancy that was leveled against her. 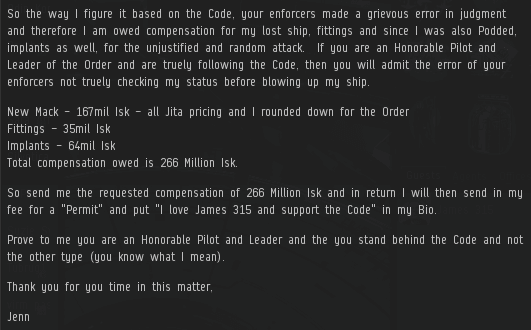 True to form, the carebear quantifies her priceless encounter with an Agent by putting an isk price tag on it. And at the very moment when she hopes I'm considering giving her reimbursement, she confesses that she was mining without a permit. Whoops! I bet the GMs wish it were so easy for them to deny reimbursement petitions: "I lost my ship due to a bug. The logs show nothing because I never had the ship to begin with. Please reimburse me anyway." 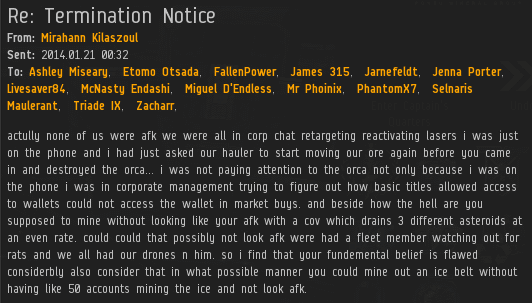 Our final essay comes from Mirahann Kilaszoul, and it's a doozy. See if you can count how many ridiculous excuses are contained in the first paragraph alone. Most miners pick one excuse and stick to it, while Mirahann takes the "spray and pray" approach. My favorite is the one about how all the miners looked AFK only because they simultaneously needed to retarget their asteroids.

...Then comes every carebear's favorite argument: "Save CCP from bankruptcy by protecting the newbies from being driven out of the game!" Since when did the New Order and its Code "cripple the ongoing development of this game"? Maybe if it weren't for the New Order, CCP could spend its money developing EVE, but because of us, they only have money for side projects like Dust 514 and World of Darkness and a monument with my name on it.* Also, Mirahann says "ongoing development" as if EVE is just getting started. The game's been around for more than 10 years now. On the other hand, if a 2009 character is a "new player", then EVE could be considered a new game.

* The monument will also include the names of the other EVE players.

Mirahann insists that all of highsec is a "new player zone". (Someone ought to tell this to the people who actually live in highsec, because most of them are as old as dirt.) Mirahann further argues that the New Order is single-handedly keeping EVE a "low population game". You would be amazed how many highsec carebears believe this. I wonder how many subscribers and how much money they think CCP needs before it's safe to start ganking again. How many players does EVE need before shooting spaceships in highsec becomes okay? A million? Five million? A hundred million? How many players does it take, carebears?
Posted by MinerBumping at 21:31