One of the most reassuring things about life in modern highsec: No matter what else is going on around us, we still have the Code, and carebears are still required to follow it. Let this truth be your anchor. With that in mind, let's look at some of the kills that took place during the week of March 23rd @ 00:00 EVEtime through March 29th @ 23:59 EVEtime. 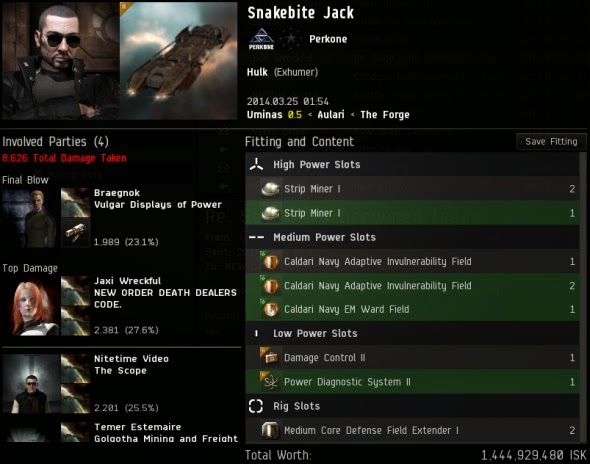 Snakebite Jack was bitten by the bot-aspirancy bug. He assumed that he could solve any problem by throwing a bunch of money at it. You can fit as many Caldari shield mods to your Hulk as you like, but you'll still have a Code-shaped hole in your tank. Agents Braegnok, Jaxi Wreckful, Nitetime Video, and Temer Estemaire brought the criminal and his 1.4 billion isk exhumer to justice. 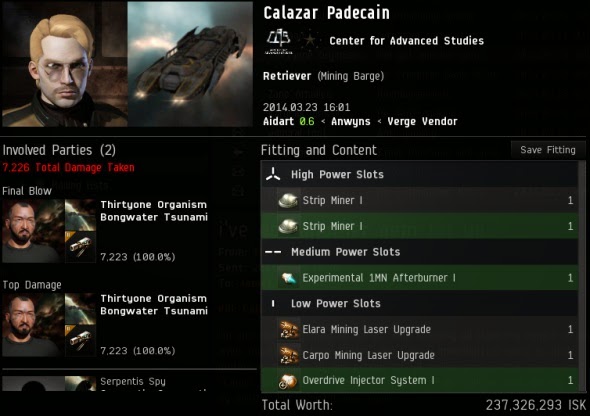 At first glance, Calazar Padecain's Mackinaw doesn't seem very remarkable. That's until you realize it's not a Mackinaw at all--it's a 237 million isk Retriever. Agent Thirtyone Organism saw the unusually expensive barge and managed to catch up with it, despite its speed tank. 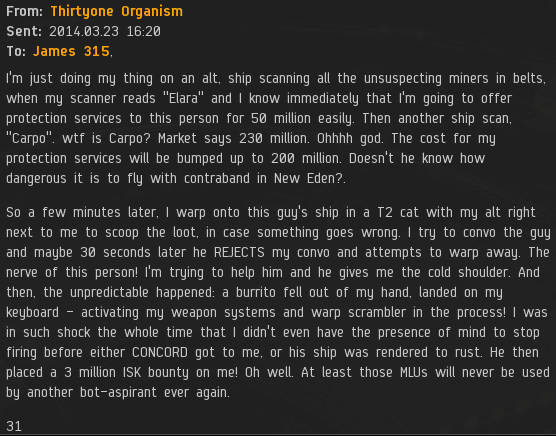 Protip: When the EVE client asks you whether you'll accept a convo request from an Agent of the New Order, you say "yes". Calazar, the days of a silent, bot-aspirant highsec are over. Even a burrito knows that. 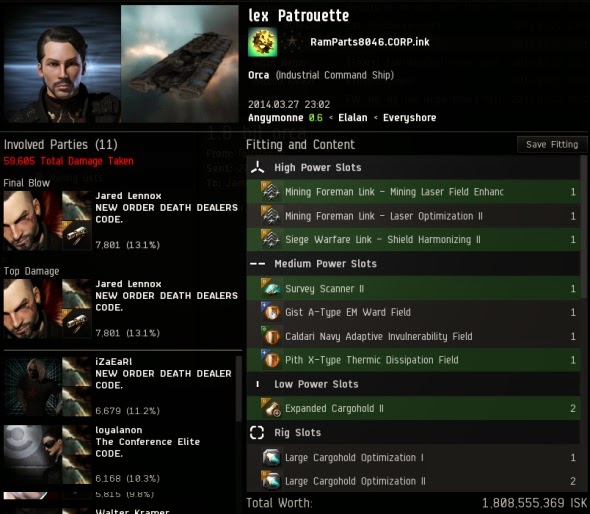 Many Code-violating Orcas died this week. lex Patrouette of RamParts8046.CORP.ink corporation lost the most expensive one, at 1.8 billion isk. Is it just me, or does this guy's corp name sound bot-aspirant? Time to buy a better bot: The Orca was fully anti-tanked in the lows/rigs, with expensive shield mods serving as the frosting on the cake. Agents Jared Lennox, iZaEaRl, loyalanon, Jebediah Phoenix, Walter Kramer, Throatslashar, Vic Jefferson, Sophia Soprano, Schlampa, Mildron Klinker, and Zane Arnolles rolled up their sleeves and went to work. By the end of it, highsec was modestly improved. 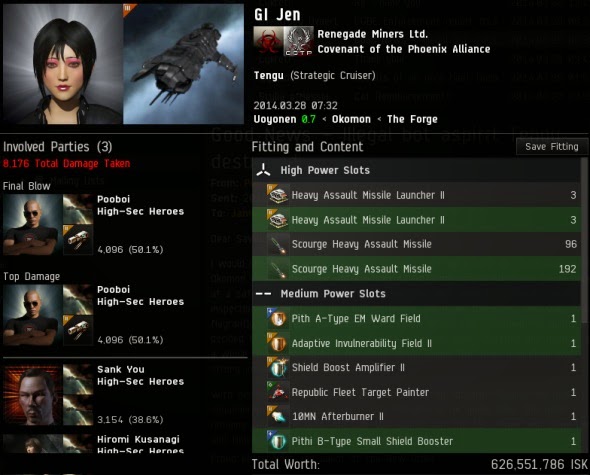 GI Jen of Renegade Miners Ltd. didn't win any friends with her corp name. Agents Pooboi, Sank You, and Hiromi Kusanagi spotted the rebel's Tengu and launched a three-man strike. It wasn't enough DPS, though; the Tengu remained intact, with a deep red gash in its armor. Why do we have a killmail? Because 15 minutes later, the aggression timer expired, and our Agents tried again. The Tengu, fully AFK, hadn't even moved the whole time. Our Agents returned and launched a second strike, proving the power of persistence. 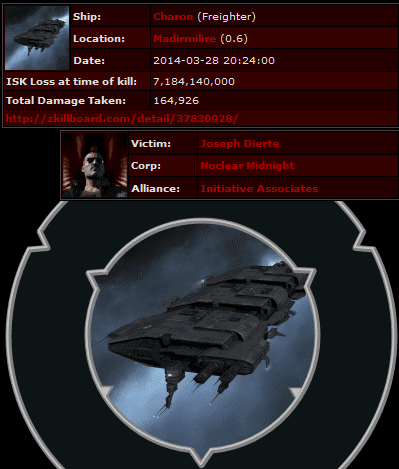 Joseph Dierte's 7 billion isk Charon was the most expensive of the freighters felled this week by Agent Lord Mandelor of Tengoo Uninstallation Service, which recently joined the Pasta Syndicate alliance. Mandelor and twenty-five other gankers were involved--including some nice multi-boxing work by Wrong Target Sorry#. If you own a freighter and intend to travel through highsec, now would be a really, really good time to buy a permit. 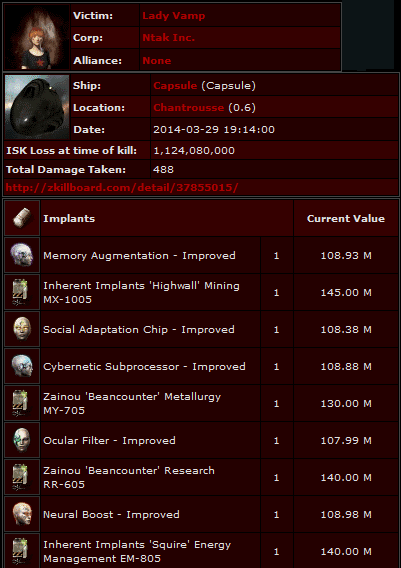 Lady Vamp gave in to the vampire craze when selecting the name of her EVE character. The New Order understands this. We're hip to the latest trends of today's youth. We just want young people to realize that mining permits are pretty cool, too. Agent Sarthana popped Vamp's 1.1 billion isk pod as a reminder. The best things in highsec are timeless.
Posted by MinerBumping at 19:31