Previously, on MinerBumping... Rebel leader liberty lost a decade of "work" when her alliance was looted and disbanded by a disgruntled director. liberty's arch-nemesis, Agent Bing Bangboom, gave liberty the chance to surrender to the New Order, but instead she vowed to fight on and take revenge.


Tylonal > liberty, do you need help paying for a permit?
liberty > mmmm nope i need refund this permits got bs all over it
Alaric Tannehill > if that helps you justify your tryanny go for it
liberty > hell im not botherd about ganks thats part the game gives our side something too shoot at but the permits can go take a running jump
Tylonal > Why, it's only 10 million?
Alaric Tannehill > why, its only a little posion

I often receive questions about the mining permit fee: Why is it necessary? Why is it only 10 million isk per year? Because it's a great litmus test for bot-aspirancy. Miners like Alaric Tannehill will refuse to pay it on "principle" because they're too greedy to give up a single isk in the name of emergent gameplay. They'll buy things from the market because they don't recognize that as human interaction.


Tylonal > and it helps stops the botters.
Tylonal > You're paying for a service, Could you imagine if the order wasn't here?
Tylonal > There would be nothing but hulks
liberty > my ass does it stop botters just makes u 10mil richer not stupid here ya numnut
Tylonal > Do you see any Hulks liberty?
Tylonal > I don't...
liberty > no as too many new order ganks around

Some rebels will swear to you that the New Order isn't making an impact. This goes back to the old denialist yarn about all Agents actually being my alts and the Miner Bingo quote that bumping won't do anything. Here we have liberty, an infamous rebel leader, admitting that the New Order has changed the ecology of highsec by chasing away the Hulks. So much for the rebel propaganda.


liberty > who would want too loose 2-300mil ship too ganks when can loose just a 30mil ret
Tylonal > They will lose the ret though. If they had a permit and simply active at the keyboard, it would be fine.
Alaric Tannehill > yeah next thing you will have to have a permit to you the head
liberty > mmmm we got a live one here i think not sure can count though maybe can do 1 if in the nude mmm 2-300mil hulk too 30mil ret if i got ganked ild love too loose a hulk of 2-300mil DUUUURRRRR!!!!!
liberty > 21**

Challenged by the rational, Order-supporting Tylonal, liberty suffered a meltdown in Kino local. Now it was time for her fellow rebels to come to the rescue:


Night Caper > commi bastard
Estelle Thomas > The Code lies
Night Caper > your Code is nothing but Nazi propaganda
Alaric Tannehill > Nazi 2.0
Tylonal > Night Caper, we gotta talk history sometime
Tylonal > First you call us commies, then you call us Nazis.
liberty > u know james 315 is brightest of u all u give him your isk and he will eventually run for it and change chrs screwing u all

Then came the next rebel propaganda line: The New Order is really a scam and eventually I'll run away with all of the money. That would be quite a trick, since I don't have 234 billion isk in my wallet. As of this post, I have around 20 billion. The rest has already reimbursed ganking ships. If the New Order were a scam, I could have saved myself a lot of trouble by taking the money a year and a half ago, when the first 20 billion worth of shares were purchased.


Invalid Hauler Thiesant > Procurer
Bing Bangboom > Kill: Athelas Solette (Procurer) Kill: Athelas Solette (Capsule) Procurer.
Alaric Tannehill > lol what the nazi were communist. what you thought they were freedom fighters
Night Caper > socialists and communits are both close in idiology and both stupid if you want to be free
liberty > hehe new order polocy its all for one mans riches
Night Caper > everyone equal but one
Alaric Tannehill > you mean the fuhrer

Rebels argued in local about whether Nazis and Communists were the same. It doesn't really matter, since the New Order gets compared to everything anyway. What comparison will they think of next?


Alaric Tannehill > You let one ant stand up to us... then they all might stand up. Those puny little ants outnumber us 100 to 1, and if they ever figure that out, there goes our way of life! It’s not about food; it’s about keeping those ants in line.
Alaric Tannehill > just remember you outnumber them
liberty > well come keep this ant in line then :)
liberty > thats what said too james 315
liberty > he even came down to ask little old us too surrendor didnt he bing lol
Bing Bangboom > He came to save you.
Bing Bangboom > You declined and now its too late.
liberty > james 315 twitching over us nervous about shouting out http://i.imgur.com/kJmqcYY.jpg

...and then they compared the New Order to the grasshoppers in "A Bug's Life". I must admit, I didn't see that one coming. If the movie followed the pattern of EVE, I don't think it would have had a happy ending for the ant protagonists. The audience would've been rooting for the grasshoppers anyway.


Bing Bangboom > if you had met my terms this would not have happened.
liberty > lol up his ass save us make more isk for him self
Bing Bangboom > how much did you lose this week?
liberty > doesnt matter how much lost unlike you guys i know this is a game and things can be replaced rebuilt n the fight goes on how every you attack us we are USATO
liberty > United Systems Against Terrorist Opperaitons

liberty delivered a stirring speech and concluded by almost spelling her alliance name correctly. By this point, I'm beginning to suspect that she's contractually obligated to put a typo in every line of text she writes.


Alaric Tannehill > once all the miners stand up its game over
Tylonal > The miners can easily do that, Just stop going afk.
Alaric Tannehill > I think they should go AFK as much as they want
Tylonal > They can, but they should dock first.
Tylonal > or go cloak.
liberty > u dont test too see who is bots confess dont even bump just camercarzy barges even those you make pay the permits
Tylonal > and with a permit, you have no worry about gankers
liberty > bs bs bs and more bs confess your just skanky gankers and you know it

It's a shame the resistance compares us to the Nazis more often than to Imperial Japan. I'd enjoy seeing how many different ways liberty can spell "camercarzy".


Yosef Brinalle > The only true winners of EVE are RMTers and people who don't play. Therefore if the CODE discourages even 1 person from turning trial acct into paying acct it is worth it.
Tylonal > I'm just trying to save you. =(
liberty > this is why usato stands against it new order isnt saving it its killing eve by ganking new players
liberty > they get turned off the game n we all loose out down with new order Viva la revolution

As if going down a resistance talking points checklist, liberty trotted out the "new players" chestnut. Now that I've got it, I'm going to make use of this link.


Tylonal > If they do get ganked, It's because they are afk / do not have a permit, and if they get turned off at eve because a Venture has died.
Tylonal > Well... That's eve.
Alaric Tannehill > no, that is not eve
Yosef Brinalle > The only people you save are the ones you drive from the game. So keep ganking those newbs! Repeatedly. As many times as it takes to make them quit.
Alaric Tannehill > that is what you would like it to be
liberty > say too james 315 for us his favourate rebel leader says hi bing
Bing Bangboom > James knows every word you say, liberty.

What Bing says is true. Nothing happens in highsec without my knowing about it. For the most part, though, nothing is happening in highsec. At least, it wasn't until the New Order came around. I wonder how many new players decided to keep playing EVE because they saw Code-based activity, rather than the empty tombs that once comprised highsec local channels?


Bing Bangboom > you aren't sneaking up behind me, are you?
liberty > i do try but im not as good in the shadows as u r bing
liberty > too cloak and dagger for me lol
liberty > right i gotter rush getting light here that late hehe kids be up soon n be no sleep then nn
Bing Bangboom > good night lib
liberty > stay safe and too all non new order give em hell n send regards too james with dirt in the eye n all :)

Evidently liberty has children. Some might find this a frightening prospect. However, I prefer to give liberty the benefit of the doubt. At least she doesn't make her children mine for her--that we know of, anyway. 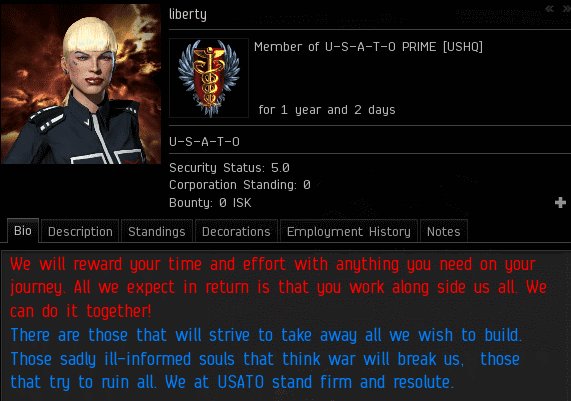 In the end, liberty's decade of bot-aspirancy came to nothing. Here's the key point: She still wouldn't have had anything to show for it, even if her rogue director hadn't stolen everything. Whether or not you believe "new players" are being chased away from EVE, threatening the existence of the game, one way or another, your virtual assets will one day disappear. If you make EVE about isk-grinding, you will end up like liberty. The New Order wouldn't wish that fate upon anyone.
Posted by MinerBumping at 20:41