Previously, on MinerBumping... Agent Arden Elenduil joined a highsec mining corp called BLACKHEARTSGAMING. He witnessed them violating the Code and was forced to destroy their AFK mining op with his Claymore. After inflicting a couple billion isk in damages, he was counter-attacked by the BLACKHEARTSGAMING PvP fleet. He wiped them out.

An awkward situation developed. Arden was still a member of the corp. Rather than accepting him as their new leader, they criticized Arden for being Belgian.

Arden was perplexed by the sudden emergence of BLACKHEARTSGAMING bigotry. Had it been there all along? Is this what highsec carebears do when they can no longer spend their time AFK mining?

The New Order is like Eve University, only educational. Arden had taught the bot-aspirants so much about EVE, and now he was sharing his knowledge of Europe. But Arden's priority remained on target: He wanted to deliver his corpmates from bot-aspirancy.

Arden tried to jolt the carebears out of their subroutines with an appeal to emergent gameplay. Like the 10 million isk mining fee, a medal is a small thing. But because it is emergent rather than programmed into the game, bot-aspirants have difficulty with it. It requires humanity to understand.

Speaking of subroutines! WhiteHeart leaned upon the old rebel line that the New Order is unable to fight ships that can fight back. Yet, at the time WhiteHeart said this, Arden had already solo'ed the corp's Rokh, Rattlesnake, and Gnosis, all of which were brought into battle with the intention of fighting back. WhiteHeart himself was the Gnosis pilot. It didn't matter that Arden had destroyed their combat ships; the rebels simply couldn't process a reality that didn't fit their programming.

Chainsstyle, the self-described "hymen slayer", was still sore about the loss of his Mackinaw and Capsule. Arden was willing to participate in a duel, but Chainsstyle swiftly changed his mind about a confrontation.

No longer confident of his combat ability, the former Mackinaw pilot switched gears. He would argue the Code.

BLACKHEARTSGAMING took a sudden interest in the law of the New Order. Space-lawyering aside, this is a good sign. It means a carebear no longer denies the existence or importance of the Code. He has bought into the system; he recognizes that he must adapt to the New Order's authority.

BLACKHEARTSGAMING miners continued to argue about the extent of New Order territories. I'm not sure where they got the idea that the New Order is still limited to Halaima and its neighbors. Those familiar with our earliest history know that after a set of secure containers was attacked (but not destroyed) in Kamio, I exercised emergency powers to expand our territory to more defensible borders. Specifically, the New Order annexed the entirety of highsec. And we never looked back. 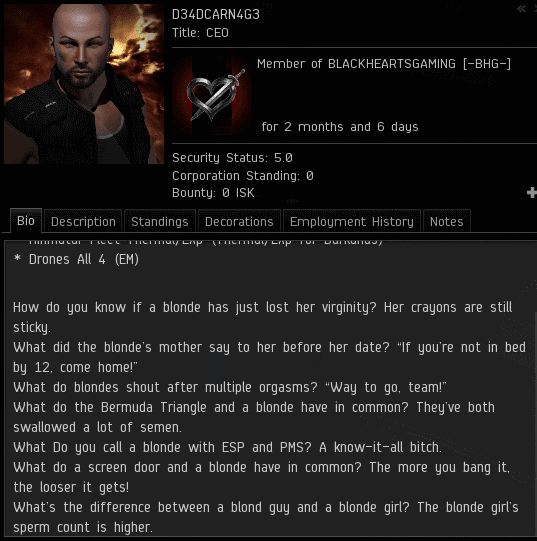 BLACKHEARTSGAMING's fearless leader, pictured above, advised everyone in the corporation to drop corp. It was the only way to escape Arden's wrath without having to pay for a medal. However, cooler heads prevailed, and Arden was contacted by a BLACKHEARTSGAMING negotiator.

The negotiation went well, with BLACKHEARTSGAMING giving into Arden's demands, and Arden letting them. How else would a negotiation with a New Order Agent go? The New Order always wins. 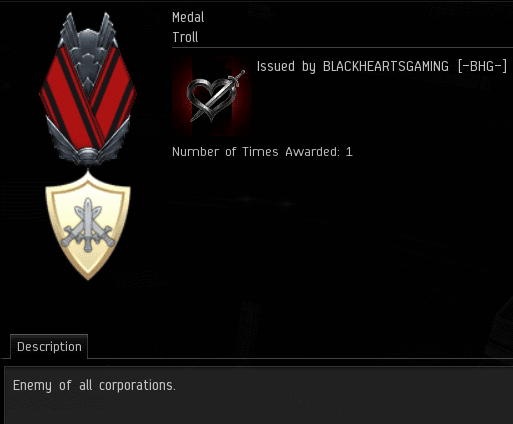 Honour, dignity, respect, courage... These are the things that thinking people associate with the New Order. We wear the badges with pride. You'll never meet a finer group of people in highsec.
Posted by MinerBumping at 18:49