Over the past year and three quarters, we have seen many home-grown resistance movements rise (well, slouch upwardly) and fall. We've also seen countless threats leveled against the New Order and its Agents. It's appalling to think that someone would be threatened merely because of his or her service to the Code. Bigotry is alive and well among the rebel carebears of highsec. 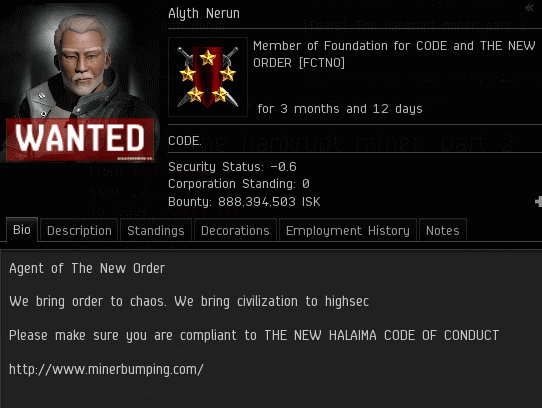 Alyth Nerun is a modest, dignified Agent of the New Order. He is an inspiration to the carebears in every system he visits. He teaches the miners that they can better themselves. He bumps them out of mining range. Alyth is the kind of EVE player that anyone would be proud to have as a son-in-law.

...Yet there are those who would cut the man down in his prime for those very same reasons. 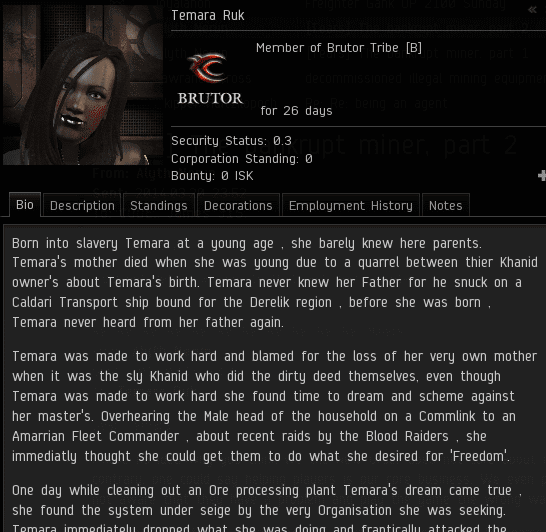 Temara Ruk declared herself an enemy of the New Order and made threats against Alyth's future in highsec. Was Alyth left with no choice but to biomass himself and start over?

...Not a chance. Alyth laughed off the threat with just the kind of panache and charisma the New Order is known for. His faith in the Code was alloyed with an extensive knowledge of the history of the anti-Order rebellions. Specifically, he knew that their threats always amount to nothing.

But then the situation escalated: Temara wasn't another one of those "someone will eventually stop you guys" kind of rebels. She intended to take matters into her own hands. And she had just the means: A deadly Hound-class stealth bomber.

Alyth remained unafraid. His Stabber was designed to bump, and he was a skilled pilot. Also, stealth bombers are not known for being suicide gank ships.

They say that to be forewarned is to be forearmed. Alyth was equipped with knowledge of his own: Suicide ganking requires that you kill a target before CONCORD arrives. Temara apparently didn't know this.

Now the game was afoot. Temara riposted with a new plan, adapted from her earlier Hound-based one. She would use a Nemesis stealth bomber.

This was highsec PvP at its finest: Two warriors, both at the top of their game, battling it out in a dizzying exchange of EVEmails. However, Alyth wasn't just any warrior. He was an Agent of the New Order, the most elite group in highsec. And unlike most rebels, he had performed spaceship combat before. Could Temara transcend the purely theoretical PvP she had done thus far?

Temara confirmed that she would indeed take action against the New Order, and not just talk about it or fantasize about it. However, all rebels say this, and then nothing happens. Alyth wasn't interested in more bluster about highsec stealth bombers. He wanted action. Alyth was determined not to let this exchange fizzle out with another set of empty threats from a carebear. And if he didn't get action out of this rebel, he would find out why.