I'm pleased to announce that last week was yet another "victory week" for the New Order. Impressively, every week since the founding of the Order has been a victory week. Let's not get complacent though. It's only through superhuman effort and intelligence that we secure victory each week in highsec. With that in mind, let's take a look at some carebears who got killed during the week of March 2nd @ 00:00 EVEtime through March 8th @ 23:59 EVEtime. 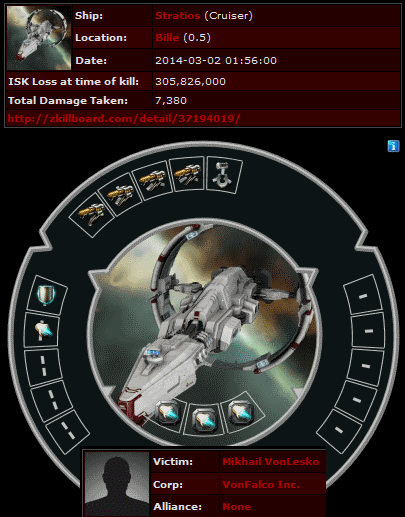 Yeah. We're not messing around this week. Mikhail VonLesko lost a mining Stratios which, of course, didn't have the slightest bit of tank. Agent Sarthana couldn't believe this monster existed until she saw it with her own eyes. Only by destroying the ship and watching it explode could she replace the terrible image with a nicer one. 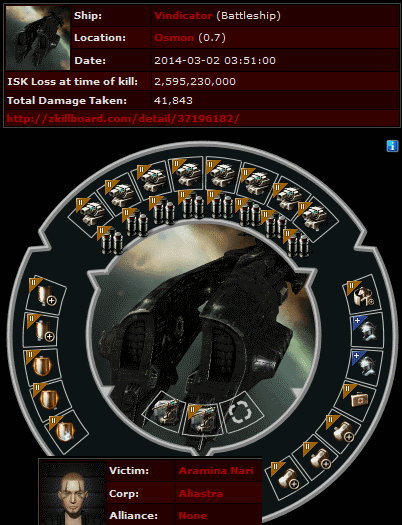 Aramina Nari lost a 2.6 billion isk missioning ship to a veritable United Nations of gankers, including familiar faces like MrDiao of GoonSwarm Federation and HelenAla Drakula of New Order Logistics. Interestingly, Aramina decided to tank and anti-tank his ship. His half-measures got him nowhere. In modern highsec, everyone needs to go all-in on the New Order. 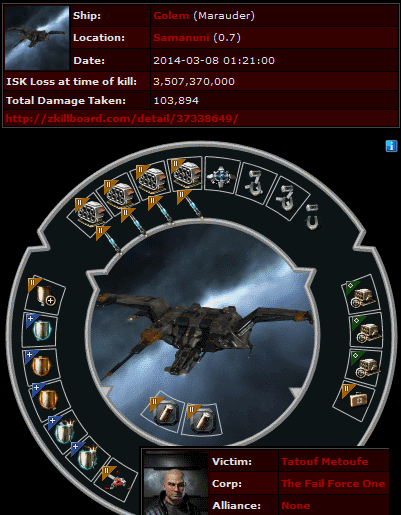 Tatouf Metoufe made Aramina look like a piker when he lost a 3.5 billion isk Golem to a Thrasher fleet from SniggWaffe and Sniggerdly. Among the gankers was one of the original Agents of the New Order, Neltharak Idrissil. The Golem pilot was a known Code-violator. In notifying me of this kill, Neltharak explained: "Afk in a mission. Then shenanigans happened." Neltharak also wanted to relay the following message:


GLORY
GLORY TO THE NEW ORDER
DEATH TO THE REBELS 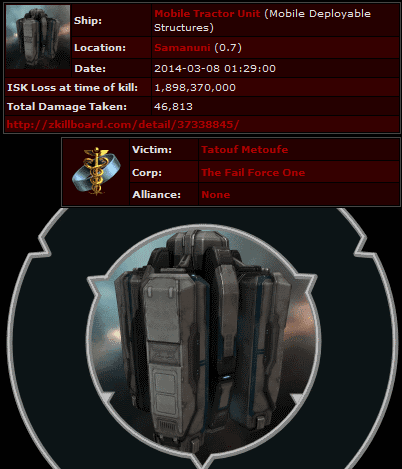 Yes, that is a 1.9 billion isk Mobile Tractor Unit. It was filled with a massive amount of loot, despite the fact that a ganker doesn't even need to get CONCORDed to destroy it. Agent Karynak Idrissil (Neltharak's alt) and some friends from SniggWaffe destroyed it and scooped a billion isk worth of contraband.

Tatouf is a member of a corporation named The Fail Force One. I think that says it all. 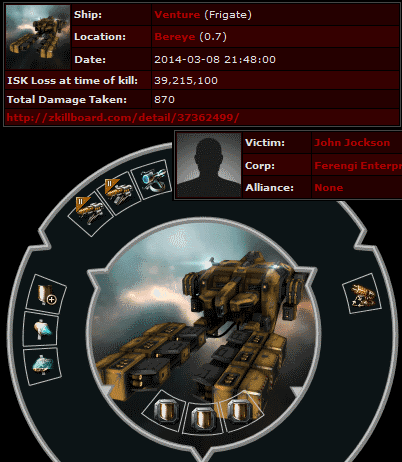 Those were some pretty expensive kills. But the highsec community isn't made up entirely of rich folk. It also contains poor and new players. The New Order loves these also. We demonstrate that love by expecting them to live up to their obligations under the Code, just like anyone else. They're people, not animals. "Newbro" John Jockson lost a 39 million isk Venture and a 70 million isk pod to Agent Sarthana, who looked upon the excessively-priced mining frigate with disgust. If you can fit a Venture with 39 million isk of equipment, you can spare 10 million for a permit. 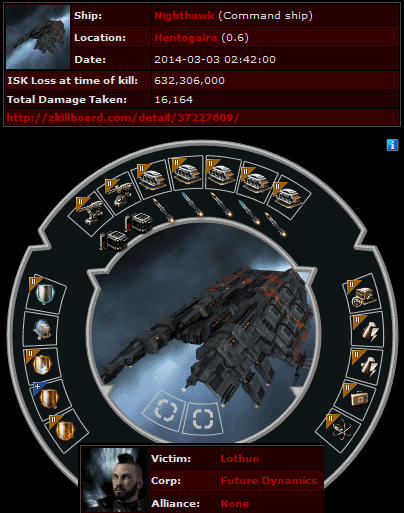 This one is painful. Lothun lost a rebel command ship worth over 600 million isk. Agent Carlvagio, with a minor assist from CONCORD Police Commander, brought the rebel to justice. Carlvagio tells the story:


I was on a routine surveillance operation in the ice field, while agent Carry On Friend was on permit inspection duty in a catalyst. Immediately upon arrival I noticed a suspicious nighthawk idling in the ice field. Had the rebels called in a booster in some desperate attempt to thwart the authorities? I found the thought very hard to believe considering the caliber of the rebels. The truth was even more shocking, an assassin.

Just as agent Carry On Friend was about to fire upon an illegal vessel, the nighthawk sprung into action. In a highly illegal and disreputable fashion, the nighthawk loosed her missiles at the good agent. Not in my highsec. I immediately radioed CONCORD for backup, decloaked my police tengu and tackled the assassin. CONCORD arrived and made quick work of the would be killer. I was not about to let this dangerous criminal get away, and was able to tackle the outlaw's pod. I guess the assassin, who goes by Lothun, thought he should plug in some fancy implants for the job, which were also decommissioned in the process.

Speaking of which, Lothun's pod was the Pod of the Week... 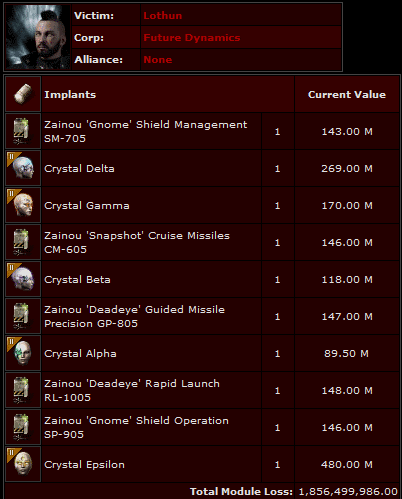 ...with 1.8 billion isk of implants. I suppose his Nighthawk benefited, however briefly, from all of those missile implants. Agent Carlvagio put a stop to that. This is one of my favorite stories: Putting the Nighthawk and the pod together, Lothuns spent nearly two and a half billion isk to suicide gank Carry On Friend's Catalyst. Ironically, Carry On Friend simply shrugged off the Nighthawk's missiles and carried on with her gank, successfully killing a Retriever before CONCORD did what the suicide-gank Nighthawk couldn't. Lothun is a 2007 character, by the way.

Lothun, that was a very expensive suicide gank. Next time, leave the ganking to the professionals. Goofus and gank don't mix.
Posted by MinerBumping at 21:35