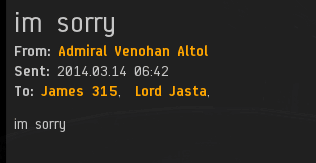 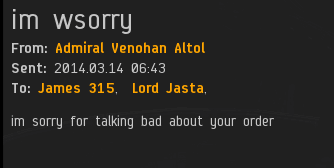 It might seem strange that I received an unsolicited, context-less apology EVEmail from a random highsec miner. Actually, it happens more often than you'd think. And when it does, there's always a story behind it. It's the story of every rebel in highsec. In the end, they will all confess their crimes and apologize.

The miner in question was Admiral Venohan Altol. His corp affiliation was suspicious. Were the miners liberated in the sense that obeying the Code liberates them from their worst instincts and bot-aspirancy? Or were they "liberated" in the bad way?

...It was the bad way. No wonder Venohan would find himself confessing and apologizing. We know how the story ends, but that doesn't mean the story isn't worth telling. In the macro sense, we know how highsec's story ends: Spoiler alert, the New Order achieves ultimate victory. Yet MinerBumping remains just as important to read, so we can learn how the New Order wins.

One day in Hentogaira, a plucky young miner named Lord Jasta decided to put down roots. What kind of system was Hentogaira? Was it a nice neighborhood? 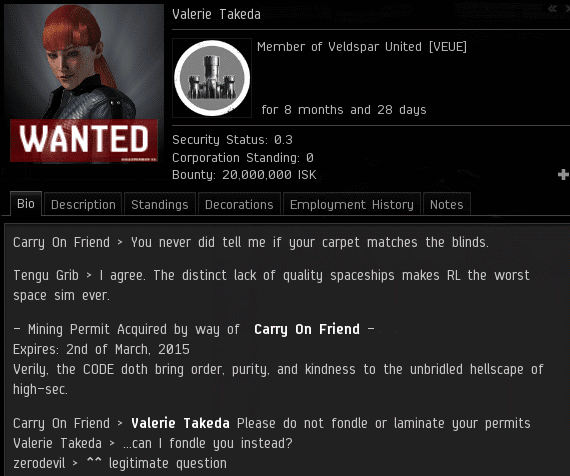 The status of Hentogaira was a matter of some dispute. Some warned of "extortionists" from Maniacal Laughter Ltd. wardeccing the miners. With the power of MinerBumping, we know that in fact Maniacal Laughter is a corp that owns shares in the New Order. It's full of good guys like Agent Carry On Friend.

admiral warnock couldn't tell the difference between right and wrong. He sounded the call for a full-scale miner rebellion against the New Order. Now the bright-eyed Lord Jasta would be forced to choose which side he was on.

Lord Jasta weighed his options and put in an application to join Univeral Liberated Mining Front. Was this another case of an impressionable miner being led astray by the resistance? 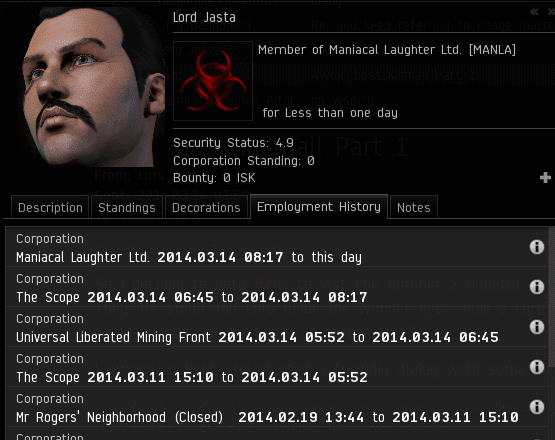 ...Not quite. Lord Jasta would only be a member of the rebel mining corp for a little less than an hour. Judging by the fact that Jasta then immediately joined Maniacal Laughter, that hour was going to be a fateful one.

You see, Lord Jasta is the hero of today's adventure. Enticed by the prospect of mining in an Orca-bonused fleet, Jasta joined the rebel corp. He was disappointed to learn that admiral warnock was too intimidated by the New Order to fly it.

admiral warnock's alt, Admiral Venohan Altol, was the Orca pilot. Out of his strong sense of fair play, Lord Jasta gave him every opportunity not to field the Orca. He encouraged the rebel miner not to undock the ship if he didn't feel 100% comfortable.

But that Orca had a destiny, and it would not be denied.