Previously, on MinerBumping... Agent Alyth Nerun received a threat from Temara Ruk in his EVEmail inbox. She warned him that she was plotting to attack him in retaliation for his enforcement of the Code. She described her plans to use stealth bombers to suicide gank his bumping ship. But Alyth had heard this song and dance before.

The truth is, we've all seen this kind of puffery from rebels. They spout a bunch of threats about powerful friends in nullsec, inbound fleets of Tornadoes, and the like. Then they disappear. We've learned to accept the nonsense as part of the cost of doing business in highsec. But this time, Alyth had enough of the nonsense. So he did the unthinkable.

Ten days later, after nary a peep from Temara Ruk, Alyth sent her a follow-up EVEmail. He demanded to know why she hadn't made good on her promise to attack him with stealth bombers. As you might expect, Temara didn't send a reply. She had long since vanished to wherever it is that rebels go, never to be heard from again.

...Or so it seemed. Now it was Temara's turn to do the unthinkable. Another seventeen days later--nearly a month since her original threat--Temara reappeared. And she did something that no rebel has ever done before or since. She explained why she didn't attack the New Order. 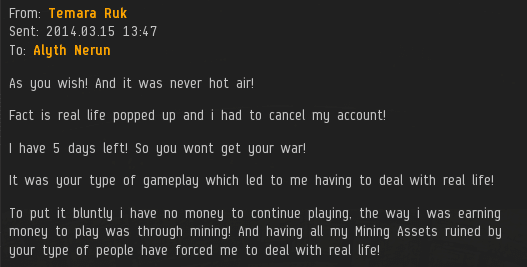 Temara sent Alyth a passionate EVEmail with more exclamation points than you can shake a Light Neutron Blaster II at. Temara wasn't able to gank Alyth's bumping Stabber because she was too busy dealing with real life. If she had stopped there, she might have garnered more sympathy; many people become too busy to play video games, at least for a period of time. Temara's situation is interesting because the reason she had to deal with real life is that her mining ships were destroyed. This caused her to need to find actual money to pay for a subscription, rather than grinding isk for PLEX. Apparently her search for a way to grind real-life money AFK was less than fruitful. Now she had to quit the game.

Temara made a unique accusation against the New Order, one that I've not heard from her fellow bot-aspirants. She claims that the New Order hurts people who are poor in real life, by forcing them to pay a video game subscription in real money. Maybe we should say that CCP is driving away new players by making them pay a subscription fee? 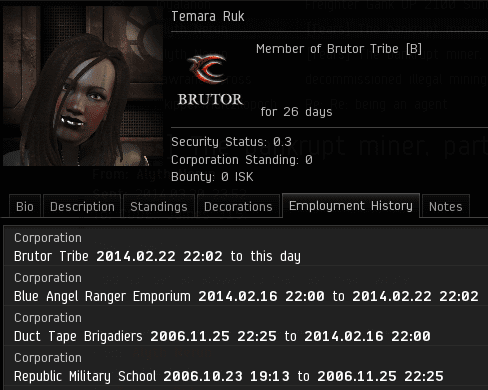 Of course, Temara is not a "new player". You might think that a highsec miner who goes bankrupt after the loss of one(?) mining ship is a new player. You'd be wrong. Temara is a 2006 character. She's been playing EVE--and presumably mining in highsec the entire time--for nearly seven and a half years. She must have been remarkably ineffective at grinding isk. But let's get back to Temara's complaint about the New Order hurting poor people. Alyth, as an Agent serving on the front lines, was our "first responder". He would have to figure out how to answer this new charge against our beloved Order. 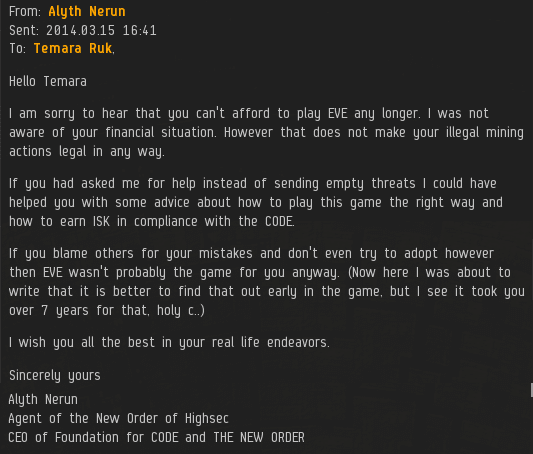 Alyth proved that the New Order isn't just incredibly powerful. It's incredibly compassionate, as well. He could've helped the wayward miner, but unfortunately she had chosen to see Alyth as an enemy instead of a friend. That choice cost Temara her life in EVE.

Temara wrote a blistering reply. She couldn't imagine how cruel the New Order must be. To continue shooting spaceships in a spaceship-shooting game--even after learning that it bankrupts people in real life!

The mind of the bot-aspirant, in ruins, becomes a maze of contradictions. Temara condemned the New Order for having fun, while justifying her own mining career as needing special protection because it's her way of having "fun", while obviously she didn't have any fun grinding isk AFK for seven years.

Some people think that I love seeing people quit the game. This is untrue. Temara's departure from EVE is a shame, because we lost in her one of the truly original carebear minds. Her treadmill and "miniatures" analogies, while completely wrongheaded, are precious. I doubt we'll see them again.

Judging by Temara's final words, she attempted to petition the GMs to do something about the New Order, but failed. Since Temara's subscription was lapsing, she could've chosen to go out in a blaze of glory and tried to gank Alyth's ship with a stealth bomber. Instead, she wanted to spend her last five days "relaxing". According to Miner Bingo, the most relaxing thing a carebear can do is mine in highsec. Could she really have spent her last five days in the game mining? They say that no one on their deathbed wishes they had spent more time at the office. But apparently "mine AFK" was the only item on Temara's EVE bucket list.

As a side note, does anyone ever use the word "ilk" in a positive way? 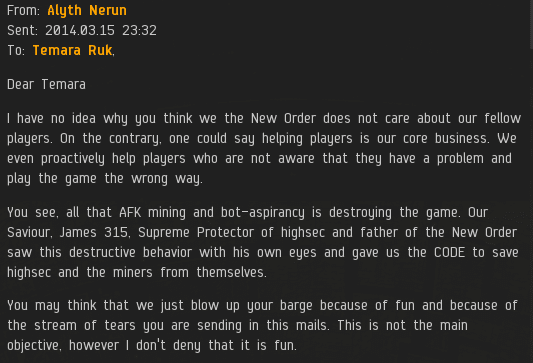 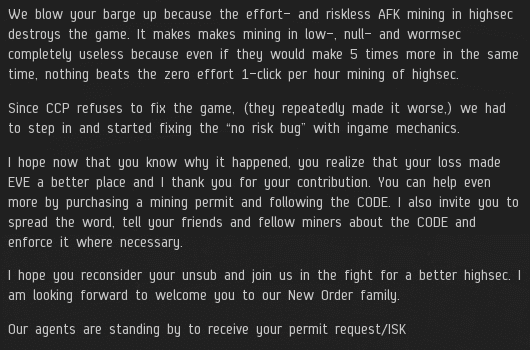 Agents of the New Order are all class. If Temara was doomed to leave EVE forever, Alyth wanted the last words she read in-game to be full of wisdom, truth, and compassion. He gave her a nice capsule summary of the origins of the Code and why the New Order is needed in highsec. He also gave her one last invitation to buy a mining permit. Since she was going to spend five days mining, and since she wasn't going to spend the isk on PLEX, why not let her character die as a Gallant?

Alas, that was the last we ever heard from Temara Ruk. But her character was not biomassed. In the future, the player who owns the Temara character may find her way to some real-life money. She could return to EVE. If that day ever comes, she will find highsec a welcoming place. Highsec will be even better than when she left it, because in the meantime, Agents like Alyth Nerun are hard at work. They're reshaping the highsec community. Give the New Order a few years, and you won't even recognize the place.
Posted by MinerBumping at 18:24