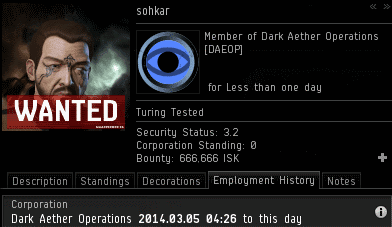 sohkar became a household name--outside of Dark Aether Operations corp and Turing Tested alliance, which hired him as these MinerBumping posts were going up. Despite being given the chance to win isk at a rate of 1 billion isk per song, sohkar vented his rage against Erotica 1 and everyone who knows her. He repeatedly violated the Code with his obscenities and odious racial epithets. Yet the Bonus Room team remained calm and professional, and somehow managed to be courteous to sohkar.


Scorpion Venom1 > are the rules for brushing your teeth written down on your bathroom mirror?
Boom Boom Longtime > sohkar it seems the only hurdles preventing you riding to glory seem to be the ones you are putting up yourself
sohkar > they are written on the package of the troothbrush i buy
sohkar > and toothpaste
sohkar > there are directions on the package
Erotica 1 > I've never looked lol
sohkar > yeah unlike u they dont make the shit up as they go along

sohkar confessed that he'd lost all faith in Erotica. He demanded to see the written rules for the game. He would not sing.

All of sohkar's in-game assets remained in the hands of Erotica and her assistants. If he refused to follow the rules, that is where they would remain. sohkar was repeatedly told how he could get his money back and become a big winner, but all he was interested in doing was cursing.


Scorpion Venom1 > sohkar thanks, im getting my obamaphone tomorrow
Scorpion Venom1 > i hope its bugged so i can talk about how taxes need to be raised on all the air traffic controlers in the nation
sohkar > u do know obama supports the controlers since we are a union and on no they blocked a 1% raise
sohkar > i already make in the 6 figures i will do ok without it
Crazey Monkey > Obama is also missunderstood IMO
sohkar > obama is a piece of shit just like all of u

sohkar had no love for his president or his Bonus Room patron. He became a nihilist, believing in nothing. How could anyone help him now?


Erotica 1 > http://daybreakservices.com/air-traffic-controller-shortage-employees-stressed-and-in-the-need-of-anger-management-classes/
Erotica 1 > is this an industry problem?
sohkar > it might be
sohkar > but remember done 3 tours in Iraq too so sure that doesnt help my anger issues
Erotica 1 > yes I would be mad at Bush too
sohkar > sure and obama made it worst
Erotica 1 > stop being so angry at the world
sohkar > he scams middle class peopel out of the money just like u scamed me out of all my shit and isk
sohkar > that why u like obama

sohkar finally admitted that he might have some anger issues. Like the rest of the highsec carebears, he claimed to be a war veteran who needed to grind isk AFK to steady his nerves.


Erotica 1 > You are just racist
Erotica 1 > like you made clear on ts
sohkar > nigger means ignorant person and thats how i was using it
Erotica 1 > right....
Erotica 1 > sohkar why are you so angry ovr so little isk you are walking away from if you are so well off?
Erotica 1 > Here's what I think
Erotica 1 > I think the piddly amount of isk you had was a lot to you
sohkar > well u might piddy my isk but some of us play a honest game and doesnt not try to scam people out of isk

sohkar defended his use of racial slurs while at the same time taking the moral high ground in EVE as an "honest" player. Rebels, enemies, and skeptics of the New Order, behold your champion.

Although he claimed to earn at least $100,000 each year, sohkar's in-game wealth was limited due to his refusal to purchase PLEX. Now he would have no choice but to start over from scratch, unless he could manage to pull off a long-shot win in the bonus round.


Erotica 1 > I'd rather see you win, but I don't understand why you want so badly to fail
Erotica 1 > You don't come in here and start demanding things
Erotica 1 > you were 100th client
sohkar > how do u prove i was
sohkar > ur word is nothing worth shit
Erotica 1 > I don't have to prove anything to you
Boom Boom Longtime > sohkar given the foul and abusive language you use i must say you come across as an unsavoury individual
sohkar > do you think i give a shit u have

sohkar was very focused on getting proof that he was the 100th client, but he didn't want to act like a 100th client. He continued to rail against the very same people who held all of his assets.


Erotica 1 > those who can deal with my challenges win a lot of isk
sohkar > yeah u keep saying that but i think ur full of shit
Erotica 1 > You have been complaining for hours
Erotica 1 > like a child with a temper tantrum
sohkar > no now i am just bored and keeping u up makes me happy since i took leave from work tomorrow where i will still get paid
Erotica 1 > so since you have the day off, lets get you and your lovely wife back in ts
sohkar > no

Air travelers everywhere breathed a collective sigh of relief when sohkar called his work and told them he would need to take a day off. I would recommend this course of action to any air traffic controller who participates in one of Erotica's bonus rounds. They tend to end with the participant's adrenaline pumping, whether it's because they just won a huge amount of money, or because the other thing happened.

News of sohkar's bonus round attracted more traffic to the Bonus Room. Everyone loves a high-stakes game. Although the out-of-game stakes were a bit lower now that sohkar wasn't going to be directing airplanes for at least a day, the tension was still high.


Boom Boom Longtime > How much of a payout can he expect if he completes the game?
Boom Boom Longtime > I'm willing to add to the pot if we can move towards completing the game
Erotica 1 > sohkar you were so very close to winning
KnowUsByTheDead > Not sure, seems I came in after he already lost faith. Such a tragedy. I too, will add to the payout. 2bil on top of whatever he is at before the multiplier and the 30%.

Luckily for sohkar, more people were willing to throw some money into the pot. Wouldn't it be incredible if the day ended with sohkar's wallet filling with cash? And apologies and hugs and non-racist remarks exchanged?

It was not to be. sohkar committed his final Code violation, the alpha and omega of highsec crimes: He went AFK. As a result, all of sohkar's money and EVE possessions went AFsohkar.

Although the bonus round didn't go as planned, the experience should teach us all a valuable lesson. sohkar is a litmus test. If you thought sohkar was the hero of the story, it might be time for you to read the Code again. sohkar demanded a set of written rules to follow, but he wouldn't follow the ones he had. Unmoored from the Code, he found himself ruled by his own worst instincts. He mistreated everyone in the Bonus Room, but only managed to hurt himself.

Don't be sohkar. Don't be Goofus.
Posted by MinerBumping at 19:18