It was another huge win for the New Order: Agents Throatslashar and iZaEaRl killed an illegal Mackinaw who was stealing ice from highsec. 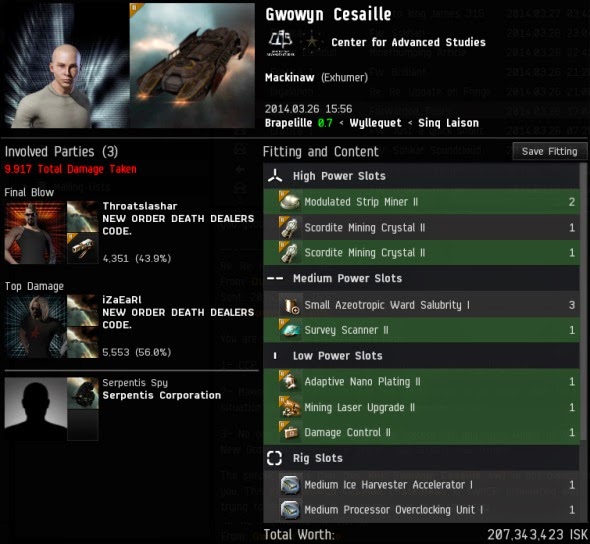 The criminal in question was Gwowyn Cesaille. He wasn't fooling anyone with his almost-tanked ship. If you're going to sacrifice tank in favor of yield and bot-aspirancy, you might as well own it and go all the way. On second thought, don't do that. 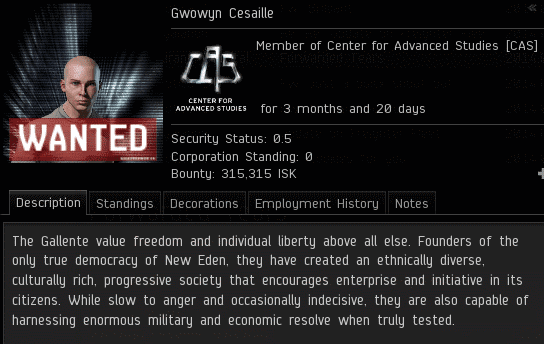 Disgusted by the whole "PvP" thing, Gwowyn became enraged and started spouting threats at the Agents in local. Our heroes directed the matter to Agent Durandi Ghostal. Durandi instantly became a mentor to Gwowyn. Within seconds, he dashed off a few sentences that taught Gwowyn more about EVE than the tutorial ever did.

Durandi is an old hand at compliance management. The whole "there is no Code" routine didn't fool him for a minute. He even had the URL for the Code, thank goodness. Can you imagine how difficult it must have been to win arguments before the internet was created?

The rebel miner was forced to concede the existence of the Code, but then he questioned whether it was a "justifiable" Code. Dr. Cesaille then diagnosed Durandi as a sociopath. Durandi hadn't even fired on his Mackinaw; he'd simply advised him to follow the Code. That's what passes for sociopathy these days? I'm sure the bar used to be much higher.

Durandi tried to reason with the wayward miner. Clearly he was an anarchist.

But Gwowyn spontaneously jumped from anarchism to legalism. He accused Durandi--either based on his EVEmails or his association with gankers--of violating American law. He didn't specify which law had been broken, though. Perhaps shooting his spaceship was harassment? If so, the nullsec alliances should look into "legal tanking" to protect their fleets. Interestingly, Gwowyn claimed that if miners had drawn up the Code, then it would have legal grounds. 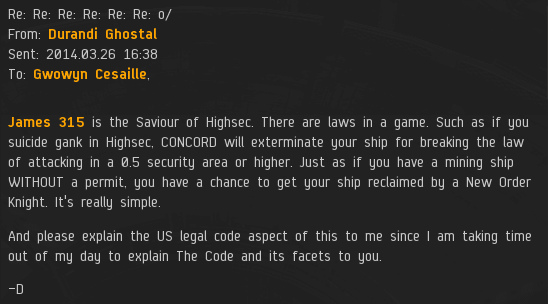 Durandi became fascinated by the carebear. If given the opportunity, would he take his space-lawyering to the next level? 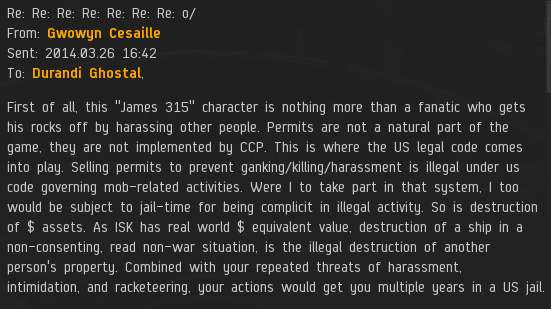 If only Babatunde B Babatunde were still around, Gwowyn would've made him proud. For the first time, a miner claimed that he himself could be sent to prison in real life for buying a mining permit! Gwowyn took it even further than that: Anyone who destroys an internet spaceship outside the context of a wardec can be sent to prison. For multiple years. Now we know why America has such a large prison population. 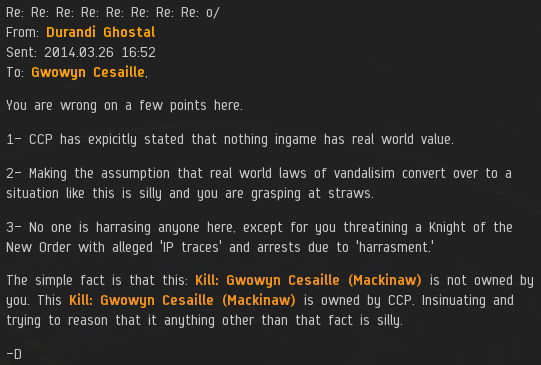 Durandi continued dispensing facts, but let's face it: The feds were already on his heels.

Gwowyn Cesaille, the very picture of mental health, decided there was no point in talking to a crazy person, especially one whose mining permits could land her in the Big House. I've got a piece of advice for those of you who do end up going to prison, though: Try to get in with the people who were sent to prison for selling mining permits, not the ones who got jailed for buying them. You can never count on a carebear to have your back.
Posted by MinerBumping at 20:56