Previously, on MinerBumping... Agent Arden Elenduil joined BLACKHEARTSGAMING, a highsec mining corp. He was invited to attend a mining op and was stunned to discover that they were a gang of Code violators. Unaware of Arden's status as an Agent of the New Order, they even encouraged him to violate the Code. Arden knew there was only one way to settle the score: To attack the mining op in his Claymore and hold their Orca for ransom.

As Arden suspected, most of the mining fleet was AFK, oblivious to the events now unfolding. One of the miners urged Arden to wait until the Orca pilot returned to his keyboard. Since Arden only had one warp disruptor, he had no choice but to kill the remaining miners. 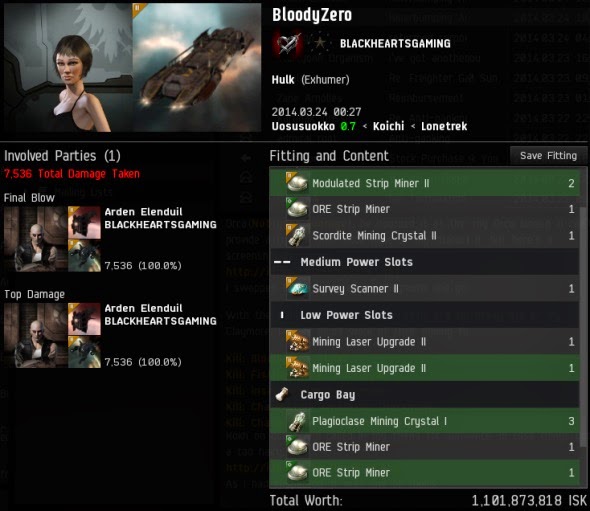 One by one, the bot-aspirants perished. One of them was flying an untanked Hulk worth over a billion isk. For some reason it had two ORE Strip Miners in its cargo bay. 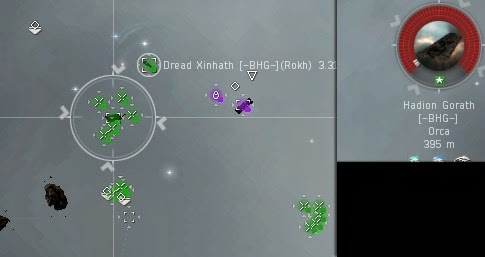 As the miners awakened, they begged Arden to wait just a little longer for the Orca pilot to pay up. The perfidious carebears were actually using the time to organize a daring counter-offensive. 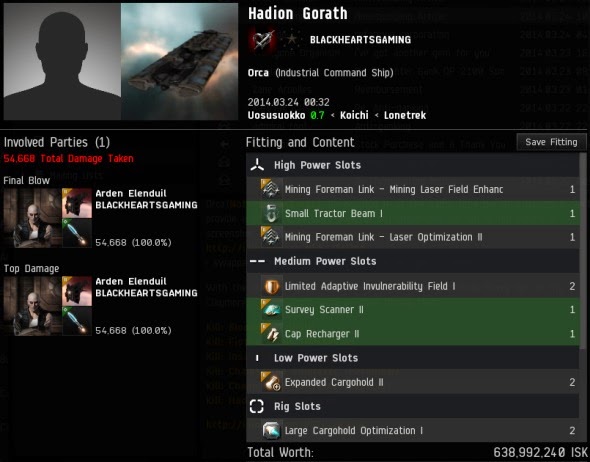 Arden sighed as he delivered the final blow on the Orca. He was disgusted by the dishonourable conduct he saw all around him. His dream of attending a Code-compliant mining op had been shattered. Now he was forced to slaughter his fellow corpmates.

The rebels paid a heavy price for their treachery. But about that whole "counter-offensive" thing...

These particular carebears were apparently unaware of some of the finer points about dealing with Agents of the New Order. For instance, Agents have a strong tendency to win. Like, all the time. 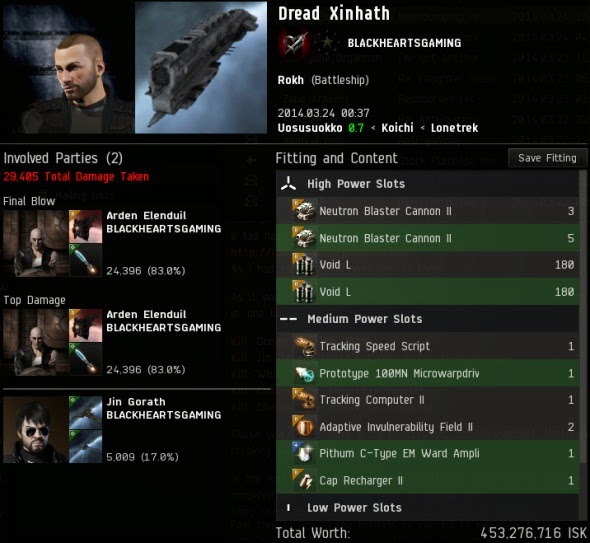 The rebel Rokh went boom, adding to the BLACKHEARTSGAMING death toll. Arden urged them to put an end to the madness. He only wanted to be paid the money he was due--he didn't want the miners to lose everything they had. But now the corp chat had gone into radio silence.

You might be curious about ship flown by Jin Gorath, who also appeared on the killmail.

Just as the Rokh was dying, the rebels sent in another wave of attackers. Actually, I should they they sent in another wave of "attacker". For some reason, their counter-offensive involved sending ships against our hero one at a time, like in an old ninja movie. But it wasn't honour that motivated this method of attack; it was cowardice and fear. No one wanted to risk facing the fearsome Agent in battle while there was still a chance someone else might do it. 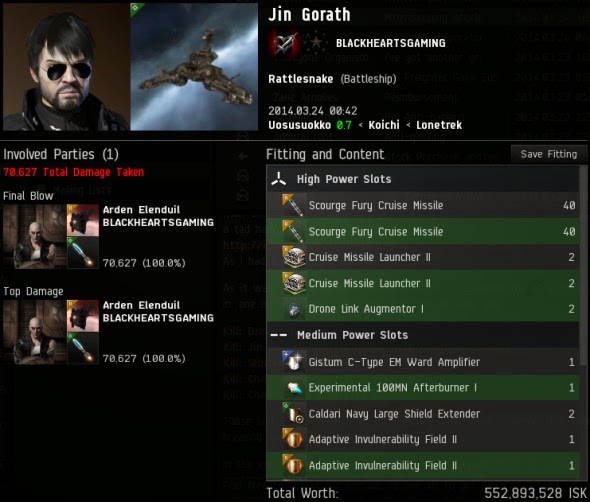 The Rattlesnake pilot failed to jam Arden's ship. This is partly because the Rattlesnake wasn't fitting any jammers; it was just a tank fit. An additional half billion isk of BLACKHEARTSGAMING contraband went down the drain. Perhaps the rebel knew he was fated to lose, and he whored on the Rokh killmail to help even out his personal killboard stats?

After the Rokh and Rattlesnake died, they sent in a Gnosis, who also went to his doom. After that, the rebels were down to their rookie ships. It was another extraordinary victory for the New Order and the principles of its Code. Both BLACKHEARTSGAMING's mining fleet and their PvP fleet had been defeated on the battlefield. It was time for them to become Gallants and congratulate Arden. Considering his prowess in combat, they might even be expected to offer Arden leadership of the clan.

Alas, it was not to be. Arden had found himself in a corp of Goofuses. They hated him for his Code. And Chainsstyle, the self-proclaimed "hymen slayer/highsec miner", didn't really like the fact that he was Belgian, either. I believe this would be the part where the carebear apologists tell us that Arden was to blame for the corp's prejudices, because he drove them to it by shooting their spaceships. On second thought, let's save that for part three.