Sometimes it feels like we live in a culture that glorifies fame for fame's sake. The truth is that there are good and bad ways to become famous. Famous for saving highsec from bot-aspirants? That's good. Famous for being a bot-aspirant with a particularly dreadful fail-fait? That's bad. Let's look at some examples of the latter from the week of February 23rd @ 00:00 EVEtime through March 1st @ 23:59 EVEtime. 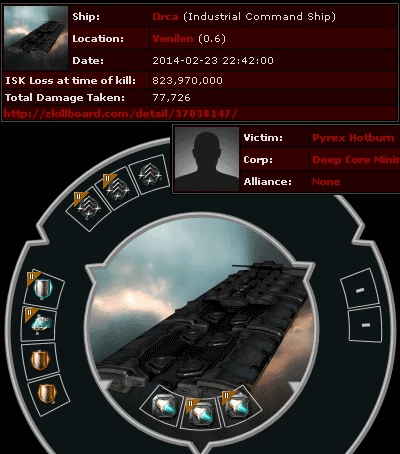 We've seen a lot of dead Orcas over the last year. Some of them were tanked, but most of them were anti-tanked. Pyrex Hotburn is an unusual case--he couldn't be bothered to make the decision between tanked or anti-tanked. Yes, those are two empty lowslots you see there. Agents Capt Starfox, iZaEaRl, Tear Jar, Sarthana, Mildron Klinker, Sophia Soprano, loyalanon, Schlampa, Vic Jefferson, and Throatslashar also noticed his oversight, and they killed him for it. The sad thing is Pyrex's Orca still had more EHP than a lot of the Orcas we see. 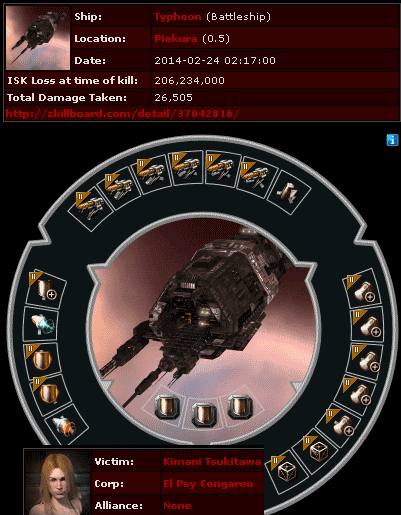 I guess I should've put a "vomit warning" on today's post, eh? Kimani Tsukitawa built a mining Typhoon with a mixed speed/anti-tank. Kimani, is this what you came to EVE to do? Was this your ambition when you installed the EVE client? Agents Capt Starfox, loyalanon, Sophia Soprano, Killowatt Nearl, and Nanny State saved Kimani from herself. Let's hope she stays free. 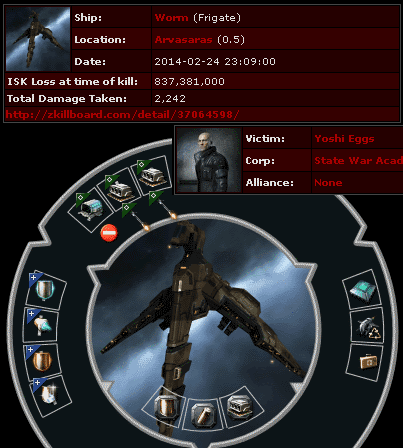 Just last week we saw a dead bot-aspirant with "Yoshi" in his name. This week's Yoshi didn't lose a mining Armageddon, but I bet he wishes he had. Yoshi Eggs lost a frigate that was simultaneously fail-fit and decadent, costing him over 830 million isk. Agents Sophia Soprano and loyalanon popped him easily. loyalanon informed me of Yoshi's crimes:


"tried to get away from my gankers by warping to station, i followed and ganked him on station. was repeatedly told to not be afk"

loyalanon gave him some very good advice, but some bot-aspirants just can't help themselves. 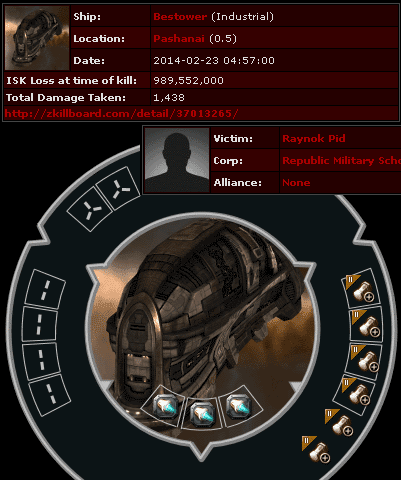 Ouch! What's worse than an anti-tanked industrial? An anti-tanked industrial with nearly a billion isk worth of cargo. Raynok Pid was popped by Agent Thirtyone Organism, who happens to belong to Brave Newbies Inc.. After Raynok returned to his keyboard, he switched over to his main--who also happens to be in Brave Newbies Inc. He complained about his loss in corp chat, whereupon our Agent linked the kill and all the Brave Newbies enjoyed a good laugh. It's so refreshing to see new players self-policing. 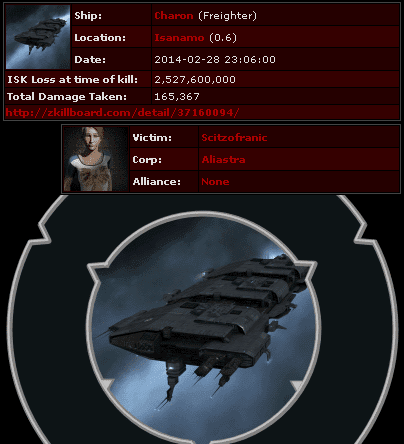 Scitzofranic's clever idea was to fly 2.5 billion isk worth of ship and cargo, unescorted, through New Order territory. He didn't even ask anyone in the New Order to find out if this was okay. We can see why: 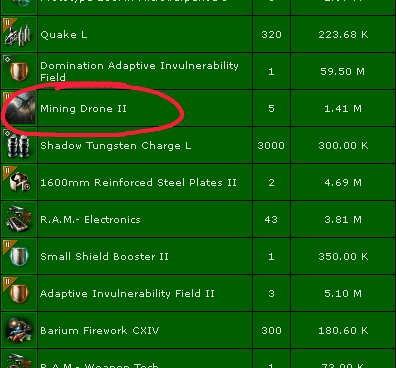 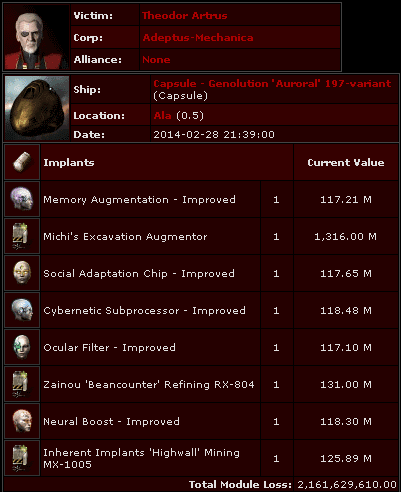 The Pod of the Week is one of those "Genolution" ones. I don't know what the "lore" explanation for making some pods look weird is, and I don't much care. All I know is, Theodor Artrus was mining without a license, had a bunch of illegal mining implants, and he got blown up by Agent iZaEaRl for it, losing over 2 billion isk in the process. And that's all I need to know.
Posted by MinerBumping at 22:29