Everyone loves a happy miner. And as every highsec miner learns sooner or later, you can't be a happy miner for very long without a permit. Agent Kalorned sent Agent Ophidia Black a follow-up report after she visited Kalorned in the Gamis system. He gave us a behind-the-scenes look at how the SevenDragons corporation became Code-compliant.

As usual, Kalorned outmaneuvered his opponent, who had no choice but to admit defeat. 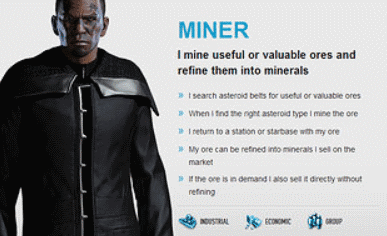 SevenDragons corp is very professional, as seen in this image from the SevenDragons website. It almost makes you think highsec miners do something. The CEO of SevenDragons, Joshen Legate'Amarr, was also very professional. Having realized that there was no sense in fighting the New Order, he was thrilled to speak with Kalorned about buying a permit: 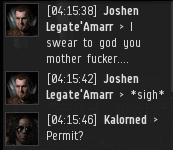 When a carebear sighs like that, it means their happiness is about to increase. 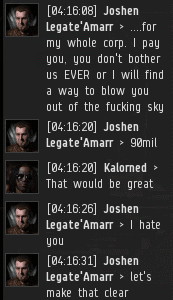 Joshen was an odd duck. He knew he needed to follow the Code, but he wasn't cheerful about it. He sounded like a rebel. Would he really pay? 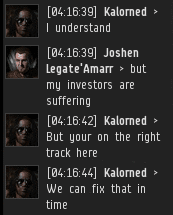 The only reason Joshen wanted to get his corp Code-compliant was for the sake of his "investors". As someone who tends to the needs of more than 700 shareholders, I can relate. My investors never suffer, though. 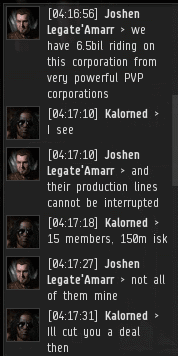 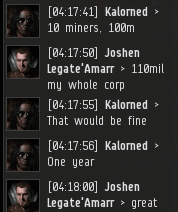 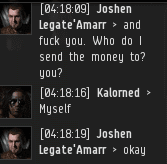 Old habits die hard. Joshen still didn't like the New Order for some reason. At any moment, Kalorned might revoke his permits for Code violations. 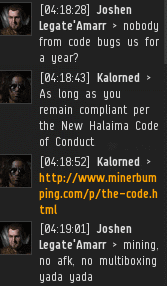 Like everyone else in highsec, Joshen had already read the Code. He didn't fully absorb it, but at least he didn't pretend not to be familiar with its terms.

For some reason, Joshen wanted to transfer the isk through a station trade window, rather than just sending the money. Kalorned graciously agreed to visit him at a nearby station. 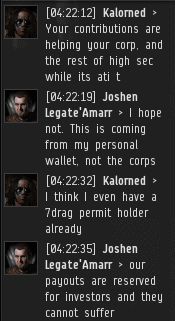 Carebears lie to everyone, even themselves. Joshen thought he could hold onto his dignity by sending the money from his personal wallet, rather than the corp wallet. 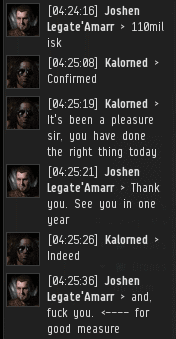 The deal was done. You don't have to like the New Order, but you do have to obey it. On the other hand, disliking the New Order is usually a Code violation, if it manifests itself in a tangible way. Thoughts are considered tangible.

I'm convinced that if Joshen had joined the New Order family in spirit, rather than simply by the letter of the law, he would have enjoyed greater success. His under-the-table purchase of mining permits for his corp, along with his disrespectful attitude, doomed him. Rather than growing, his corp lost half its membership. With ThreeAndAHalfDragons only running at half-strength, I wonder how many "very powerful PvP corporations" ran out of ore? After all, without miners, we wouldn't have any ships! ...Right?
Posted by MinerBumping at 18:48