Last time around, I offered a list of candidates who were good and a list of candidates who were not good. This time, I'm going to keep things short and sweet. Although the voting system allows you to select many candidates and put them in order, the reality is that only your top two or three selections matter. Even if you're part of massive coalition-level voting bloc, the person who comes in fifth or sixth on your list is probably going to receive approximately no value from that vote. What really matters is which candidates get the #1 and #2 spots on your ballot.

Note to massive alliance/coalition members: I'm going to ask you to bend the rules a bit. Your alliance leaders may give you a list of 14 candidates and instruct you to vote for them all in order. The candidates at the top of that list will be members of your alliance and/or coalition. Further down on the list you may see a candidate that you really like. That candidate will not benefit from your ballot. What I would like you to do is put the candidate you really want to win at the top of your ballot, and go from there. If your preferred candidate wins a seat, good job--your vote was probably necessary. If your preferred candidate doesn't win a seat, your ballot will be counted no differently than if you had followed the alliance/coalition's rules. Win-win.

Without further ado, let's go to the MinerBumping endorsements! 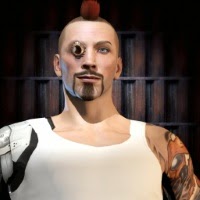 Psychotic Monk needs no introduction. MinerBumping endorsed him last time, and he was just a handful of votes shy of winning a seat. He enjoyed widespread support, and appeared on many "form" ballots, but his name wasn't ranked high enough on those ballots to put him over the top.

Notwithstanding the whole "needs no introduction" thing, Psychotic Monk created the Belligerent Undesirables community, which has always found common cause with the New Order. They are part of the highsec family. As with last year's candidacy, Psychotic Monk is running on a pro-fun, pro-emergent gameplay platform. He opposes the carebears and their allies. Psychotic Monk loves highsec and is a friend of humanity. You might recall he organized and hosted last December's SuicideGank4Good Telethon, which raised money for charities supporting the victims of typhoon Haiyan.

Unlike many of the candidates, Psychotic Monk is not a member of a large alliance. If he is going to win a CSM9 seat, he's going to need you to put him at the top of your ballot! 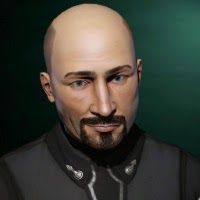 MinerBumping's second endorsement goes to DJ FunkyBacon. He has been a host on Eve-Radio for as long as I can remember. This is his first crack at the CSM. He's running on a platform of representing the lowsec/faction warfare crowd. So how did FunkyBacon manage to attract the attention of the New Order? Well, it all came out of the Erotica 1 controversy. 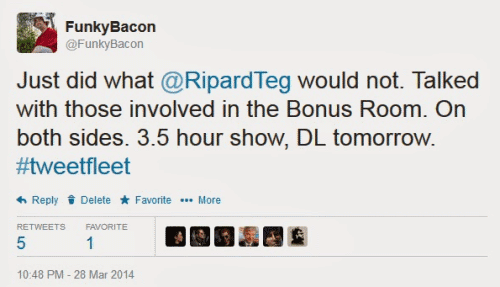 
So there you have it. When voting is opened up, I'll post again to toss a link to the voting page. In the meantime, if you're shopping around for CSM candidates to put on your ballot or you know people who are undecided, give Psychotic Monk and DJ FunkyBacon some support.

Oh, and one more thing: Ripard Teg and Trebor Daehdoow have both announced they're not running for reelection. Voting hasn't started yet, and the CSM9 election result is already a victory for the New Order!
Posted by MinerBumping at 21:27