I've often said that a suicide gank, or any other such action taken in highsec, becomes a revolutionary act when done in the name of the Code.

We are transforming highsec. We shouldn't lose sight of the fact that every day in highsec is an extraordinary day. Those who lived in highsec before the New Order know exactly what I'm talking about.

An elite unit of New Order Agents was busy transforming the Finanar system when they encountered resistance. Much of that resistance took the form of illegal mining performed by Retriever pilots. They assumed they were living in the old highsec. Our Agents speedily brought them up to date.

The incredible truth is that a small, well-trained group of Agents--absolutely committed to the Code--can win a battle against bot-aspirants even when horrifically outnumbered.

Here's where things get interesting. Seeing the effectiveness of a New Order team, the rebels decided to fleet up for some teamwork of their own. Agent Lamar Jackson was in a Vagabond. Against him were a Tornado, a Rapier, and a Drake Navy Issue. Because Lamar had looted from a carebear's wreck, he was freely attackable by all. By the traditional laws of EVE, Lamar was toast. There was no way he could win this 3v1 fight. But Agents of the New Order don't follow the traditional laws of EVE. They follow the Code. 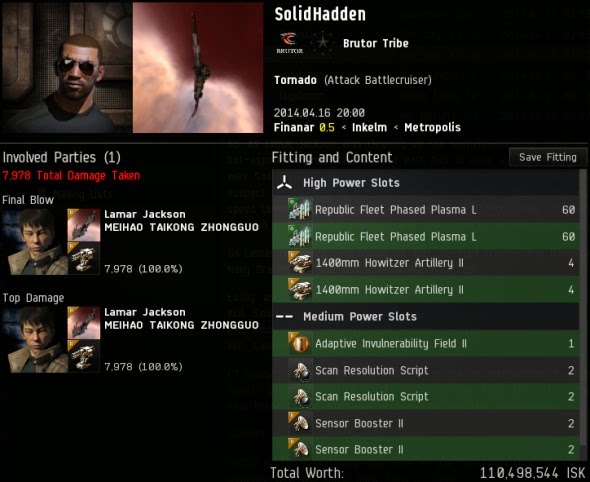 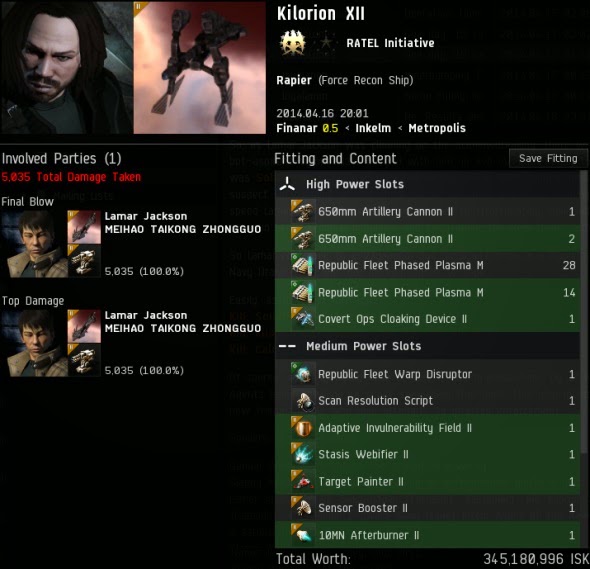 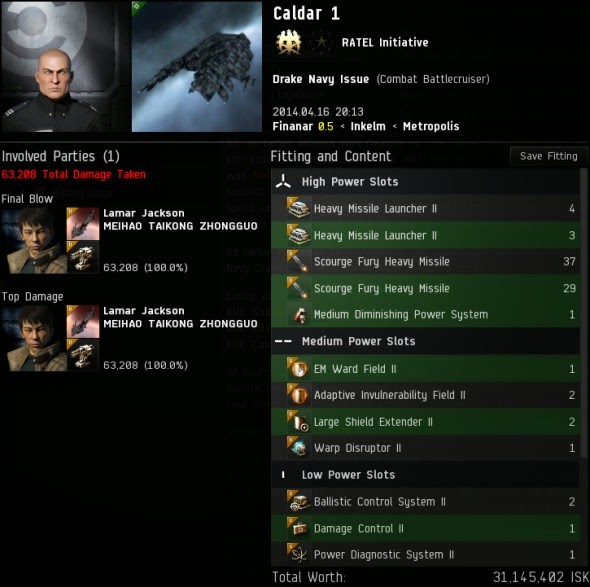 And finally, BLAP! went the Drake Navy Issue. Agent Fap Angel switched into a Stabber and continually bumped the DNI away from the station, preventing it from making its panic-driven re-dock. The New Order's extraordinary victory proved that it is just as capable of killing PvP ships as untanked AFK miners. So much for "you only shoot ships who can't shoot back". 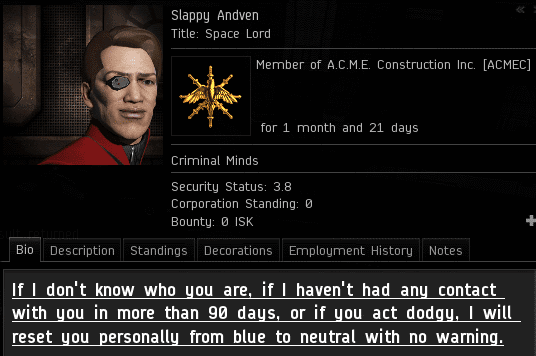 MinerBumping frequently debunks the myth that our Agents only shoot ships who can't shoot back. Having witnessed our heroic Vagabond pilot win the battle, how would the carebears react? Would they give credit where credit was due, or would they remain stuck in their bot-aspirant subroutines, unable to process a reality they weren't programmed for with Miner Bingo quotes? Resident carebear Slappy Andven provided the answer.


Gunnar Andersen > theyre too scared to leave station anyway
Slappy Andven > SolusLunes shooting at defenseless miners proves you're a pedo.
Lamar Jackson > Kill: SolidHadden (Tornado) Kill: Kilorion XII (Rapier) Kill: Kilorion XII (Capsule) Kill: Caldar 1 (Drake Navy Issue) Interfering with an Agent of the New Order is a serious offense.
Slappy Andven > Lamar Jackson sniffing James's buttocks like this is disgusting. You should get a life.
Slappy Andven > I'm sorry that both of you have penises so small that you can't shoot at someone who will shoot back. Such a shame.

Ironically, at the very moment the battle was wrapping up, Slappy was accusing the New Order of "shooting at defenseless miners". Then, just moments after seeing the killmails of the Tornado, Rapier, and DNI, Slappy still went ahead with the carebear cliché. Remarkable!

Slappy was unable to handle the truth. He was frozen in the denial state, unable to cope with modern highsec. He was only a few steps ahead of the people who say the New Order doesn't exist, that I have no Agents, and that no one enforces the Code.

Yet the transformation continues anyway. Denialists can refuse to see the changes we make, but they can't stop them.


Morathi Sulephet > there is no code
Slappy Andven > The code says you're a pedo, and your mother dresses you funny.
Slappy Andven > It also says James 314 sucks teh gay cock.
Fap Angel > Are you a homophobe?
Lamar Jackson > That's a sad thing to be in our progressive society.
Slappy Andven > Fap Angel actually, I'm bi. But my character, that's another story.

Our Agents shook their heads. Carebear filth continues to clutter the asteroid belts. No matter how much denialism they encounter, our Agents never give up hope of saving the carebears from themselves. So they roll up their sleeves and get back to work. 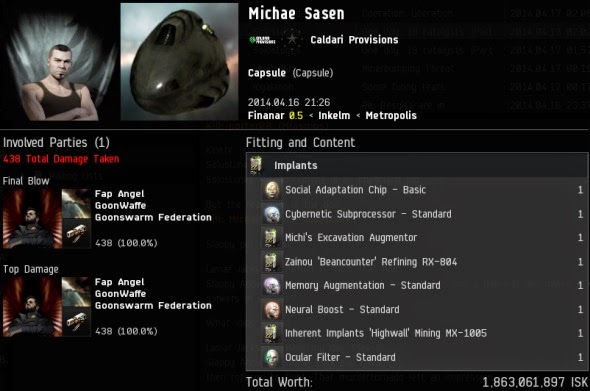 The thing about denialists is that they're not truly frozen in denial. They're not perfectly still--they only appear that way. If you look closely enough, you can see that a denialist carebear is actually moving very, very, very slowly. In time, progress will be made. And the New Order has nothing but time. After Michae Sasen lost his Hulk, he lost a pod worth 1.8 billion isk. The podmail was linked in system.


Lamar Jackson > Mother of God, that pod
Slappy Andven > Hahahaha! What idiot has a Michi's and a Highwall and mines AFK with gankers in system?

You see? It might be slow, but even Slappy is making progress. On that day in Finanar, our heroes destroyed 4.5 billion isk worth of non-compliants. They educated miners about the Code. They sold some mining permits. And they even managed to nudge a denialist a little closer to the finish line. Just another extraordinary day in highsec.
Posted by MinerBumping at 18:10