Have you ever seen someone, and you knew you recognized them, but you didn't know where you knew them from? 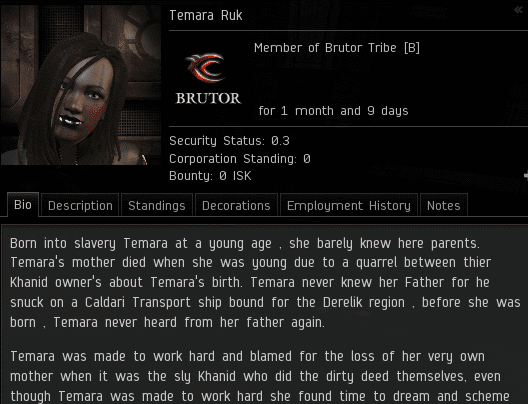 Remember Temara Ruk? Sure you do. She was on MinerBumping not very long ago, in fact. Where do you know her from, though? What's her gimmick again? 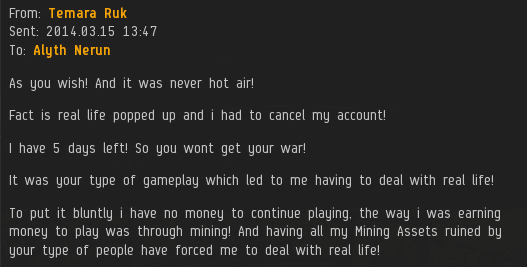 That's right, the exclamation points at the end of every sentence. She threatened Agent Alyth Nerun, vowing to gank him with a Hound. Then, when she didn't attack him, he asked where she went. She claimed the New Order made mining so unsafe that she ran out of isk for PLEX. She had no choice but to quit the game. Alyth told her why the Code is good and AFK mining is bad. She disappeared, having unsubbed from EVE.

Luckily, Temara eventually found some money to pay her subscription fee, and she returned to the game. Now she could spend her free time doing what she loves best: Mining in highsec and arguing with Alyth over EVEmail. She celebrated her return with another long rant about why she can't follow the Code.

Temara claims to love EVE. She "holds it dear". This presents an interesting philosophical question. Can you hold something AFK? Can you tell someone, "I love you, but I never want to be around you, ever"?

As Temara's essay continues, she articulates her view of how EVE is structured. EVE is split into four parts: highsec, lowsec, nullsec, and wormhole space. Highsec is where you go to make money AFK--while you simultaneously work at your job. Since she only has two hours of free time blocked off for playing EVE each day (an amount she calls "meagre", though some would envy it), she needs to grind isk while at work.

"I'm not the one breaking the economy," she says. We know that's not true. AFK miners are absolutely harmful to the EVE economy. And people playing video games at work probably aren't helping the real-life economy, either. That having been said, if you're enforcing the Code or reading MinerBumping at work, that's justifiable since it makes you a better person and therefore a better employee. Your employer benefits in the long-term.

To illustrate her point about how she's not hurting the EVE economy, Temara brought up the example of her neighbors. You see, she thought her neighbors were ruining things, but actually they were helping things. Even after hearing this story, I'm not convinced. I think a better analogy would be the story of the guy who thought he was helping things, but was actually hurting them.

Apparently, the way EVE is supposed to work is that you go to a corp and ask if they can afford a war. Then they say "no, we're just industrialists and we're all AFK", and you say, "okay, I won't declare war". Isn't consensual PvP fun?

FYI: If you really have a thousand EVEmails from people saying they're quitting the game due to the New Order, please forward them. I think they were meant for me.

Temara ends the rant on a surprisingly cheerful note. That's what I like to see. No more of this "I'm quitting in five days because I ran out of PLEX money" stuff. 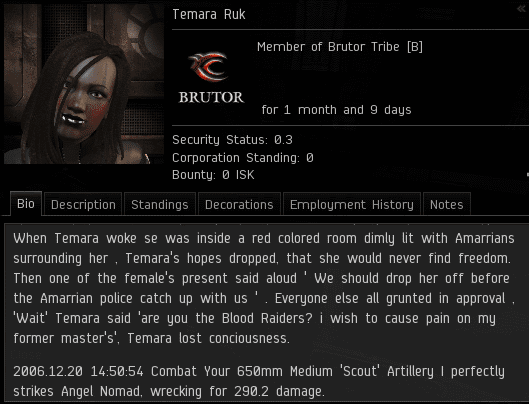 I always knew Temara would return to us. She's not one to give up easily. Her bio still contains her favorite damage notification from way back in 2006. Her artillery did an astonishing 290 points of damage against an NPC, and she'll never forget it. EVE is real.
Posted by MinerBumping at 19:02