Who You Gonna Call? Part 1

Highsec can be a chaotic place. No matter how much someone may wish to be a "solo" player, EVE is an MMO. Players interact with each other. Sometimes, unfortunate things happen, somebody's gotta deal with it, and you who gonna call? 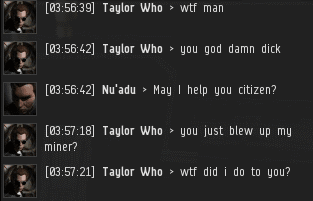 Emergent gameplay happened to Taylor Who, a Retriever pilot who was mining ice without a permit in New Order territory. When his barge exploded, he convo'ed the ganker, Agent Nu'adu.

Taylor wanted answers. He came to the right person. Nu'adu is one of our most experienced Agents. He knows the ins and outs of highsec, and was intimately familiar with the reasons why Taylor's ship exploded. 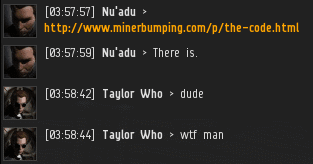 ...that would be the sound of a carebear losing an argument. If you claim there's no law in highsec, and someone links you a website with a bunch of highsec laws--what other comeback can you have besides "wtf man"? 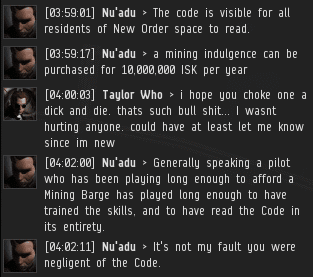 Taylor Who claimed to be new. That's great. The New Order loves new players. We even have the word "new" in our name. But Taylor wasn't exactly making a great first impression with his illegal mining and "choke on a dick and die" comments. Still, you know me--whenever someone says they're a new player, I always have to look them up. 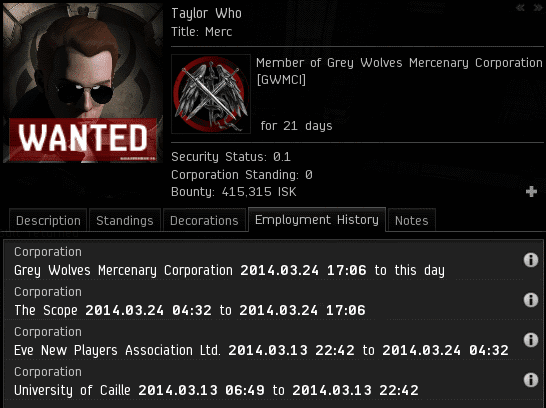 Taylor's story checked out. He'd only been playing the game a bit less than a month before he lost his first barge. Granted, I lost my first ratting ship in lowsec within my first week of playing. Still, at least Taylor wasn't a 2009 character or something claiming to be brand-new. While perusing Taylor's profile, I noticed something odd. He was in a mercenary corporation. His title was "Merc". What kind of mercenary spends his time mining ice in highsec? 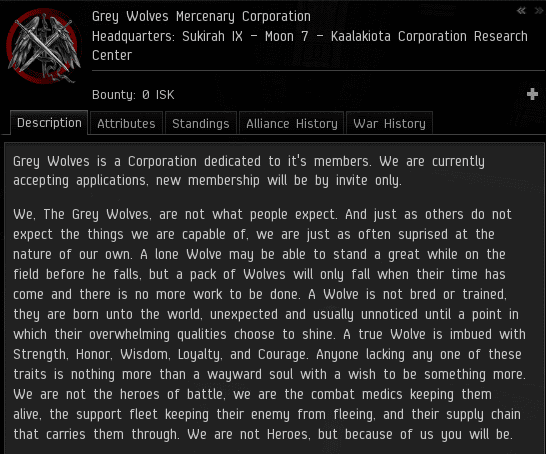 The corp in question was the Grey Wolves Mercenary Corporation. The description said precious little about the mercenary services they provide, but it went into great detail about what a "wolve" is. A "true Wolve is imbued with Strength, Honor, Wisdom, Loyalty, and Courage." Sounds like the description of a New Order Agent. However, the corp description claimed that they were combat medics, support fleets, and supply chains. So... They're carebears who call themselves mercenaries? 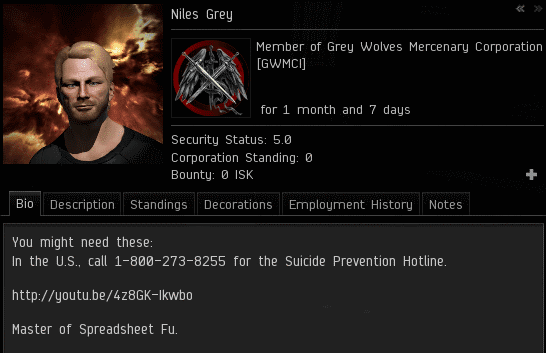 The founder of Grey Wolves Mercenary Corporation is Niles Grey, whose bio helpfully includes the number for an American suicide prevention hotline. Is that because his mercenaries drive their enemies to suicide, or because his corp members get so upset when they lose a mining barge?

Taylor is one of those highsec miners who claims to be something other than a miner. The manner in which he speaks gives him away. 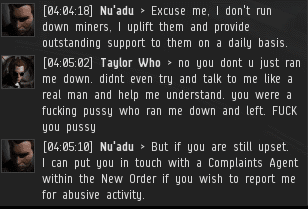 Taylor hadn't made use of his corp founder's preferred suicide prevention hotline. He had convo'ed the Agent who killed him. Now Agent Nu'adu presented him with another option: To contact the New Order Complaints Department. 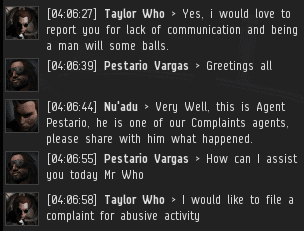 The foul-mouthed carebear jumped at the chance to file a complaint about abusive activity. Was he going to report himself? 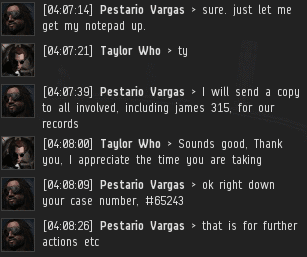 Taylor was in luck. Agent Pestario Vargas was manning the complaint desk that evening. If anyone was going to give Taylor a fair shake, it was Pestario, a man who loves the New Order and guards its reputation jealously. When it comes to Code enforcement, he makes sure every "t" is crossed and every "i" dotted. One way or another, justice would be done this day.