The New Order is highsec's sole superpower. Other entities may be powers, of course, if they're capable of fielding fleets of combat ships. What puts the New Order on a higher level is that it possesses the Code--the EVE equivalent of a nuclear arsenal.

Agent sniperDK realized that to achieve his goal of superior Code-compliance in highsec, he would need more training. I was very impressed by his decision to focus on the Code. After meditating on the Code for several months, he returned to EVE with even more power.

Utilizing the insights he'd gained from the Code, sniperDK found his way into the Sphere's of Eden corporation. Now he would have the chance to prove himself against the bot-aspirants in battle.

sniperDK would be tested like never before. Sphere's of Eden were running a mining op with the "trifecta": miners, an Orca, and a freighter. sniperDK attended the mining op in a Hurricane.

Once sniperDK revealed himself as a follower of the Code, he was met by the most extraordinary intolerance from his corpmates. This may have had something to do with the manner in which sniperDK displayed his loyalty to the Code; he started killing their Hulks. 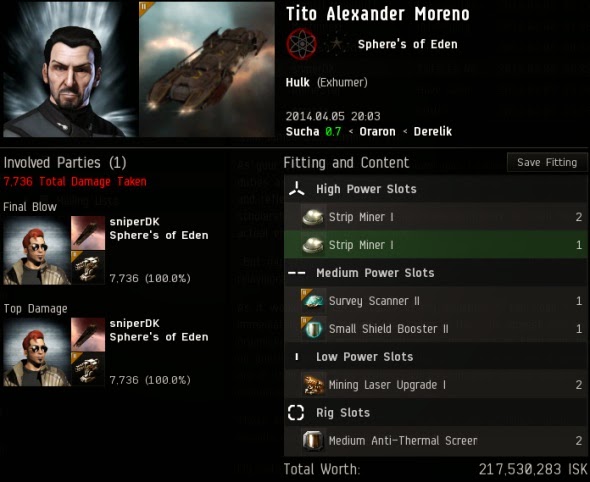 Naturally, the exhumers were all fail-fit. A lesser Agent might have logged off in disgust. But remember, sniperDK had spent months preparing for this moment by studying the Code. He wasn't about to give up now. 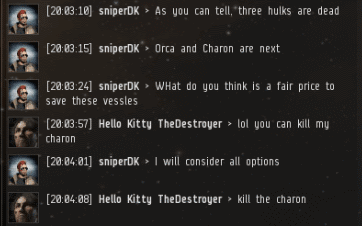 sniperDK offered the carebears a way to have peace with honour. The freighter pilot, Hello Kitty TheDestroyer, gave in to madness instead. He wasn't expecting emergent gameplay to intrude upon his routine mining op. The bot-aspirant suffered a system failure. 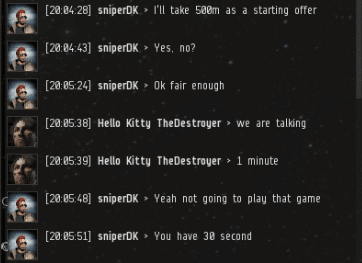 If you have ever held a ship for ransom, you're familiar with industrialists' delaying tactics. They act as though it takes a long time to send someone isk. Don't be fooled! Hello Kitty was hoping to organize a counter-attack to save his freighter. Unfortunately, no one in the corp wanted to participate. 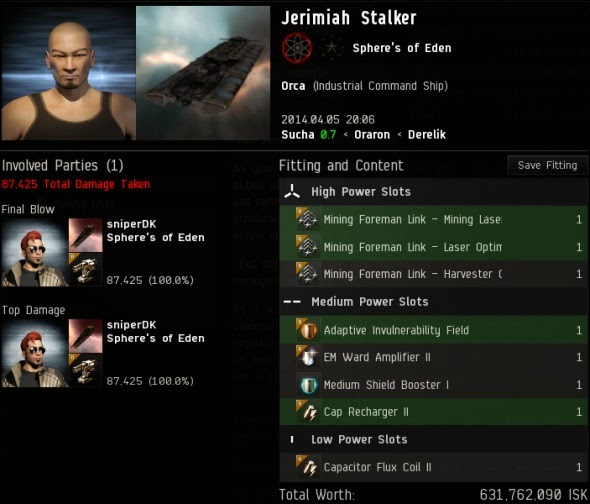 The Orca died next. It had one of the worst fail-fits I've seen: Its lowslots consisted of a single Capacitor Flux Coil. I'm sure the Orca had plenty of capacitor when it blew up. 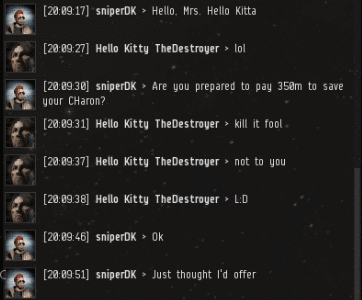 Now it was the freighter's turn to face justice. Hello Kitty demanded a quick death. He was so programmed that he couldn't live in a highsec with risk. He'd rather be destroyed than be forced to interact with humanity. 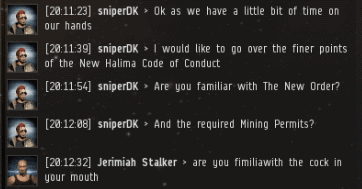 The freighter had a lot of hitpoints for sniperDK to chew through, so he took some time to lecture his corpmates about the Code. 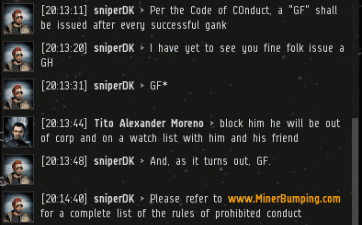 sniperDK took the path that most awoxers take: From fresh young recruit directly to the decision-maker and center of the corp's attention. That's power. It's incredible that carebears think the way to earn their corpmates' respect is to slowly work their way up the ranks with years of mind-numbing miner/hauler ops. sniperDK knew better. Shooting your corpmates and linking MinerBumping in corp chat is definitely the way to go. 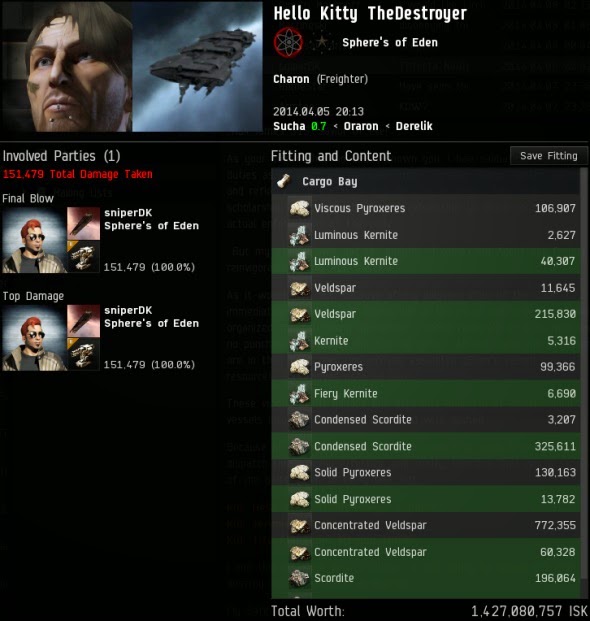 At last, the beast's structure gave way. The freighter burst open, pouring out a huge supply of illegal ore. The Kernite became particularly luminous and fiery that day.

The corp's leaders decided to go in a different direction and had to let sniperDK go. The Agent wasn't discouraged. He vowed to destroy "every last [non-Code-compliant] miner" in highsec. If you're an illegal miner, now might be a good time to stop. The New Order always keeps its promises.
Posted by MinerBumping at 19:27