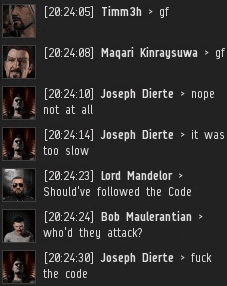 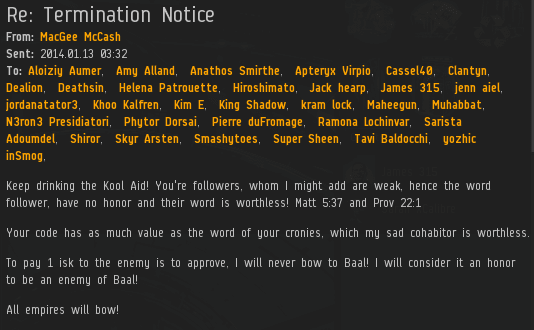 Bonus points to MacGee McCash for comparing me to Baal instead of Hitler. Sadly, MacGee loses more points than he gains, by declaring himself in favor of rebellion. The resistance movement gains another winner, there. Kyra Aeon claims to have spent "many months" saving up for a ship worth 185 million isk. Two questions come to mind. First, at that rate, how long would it take to save up 10 million isk for a mining permit. Second, why didn't Kyra do that first? 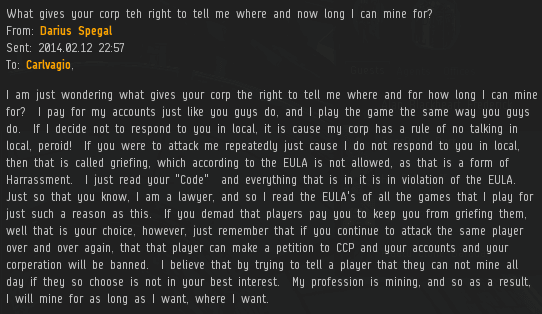 Darius Spegal warns that everything in the Code is a violation of the EULA. Really? Even the part about being respectful in local? But Darius goes further than most by saying, "Just so that you know, I am a lawyer." Impressive credentials. On the other hand, Darius never specified whether he was a lawyer in real life, or if he was just a space lawyer--which is even more common. 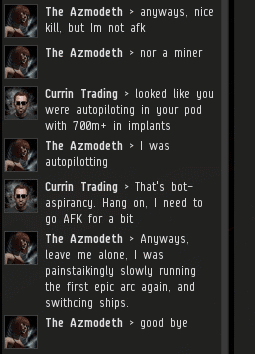 Some people ask me for advice on how EVE should be played. Here's some free advice for The Azmodeth: The best way to do an "epic arc" is not to do it at all. I haven't run a mission in 8 years. 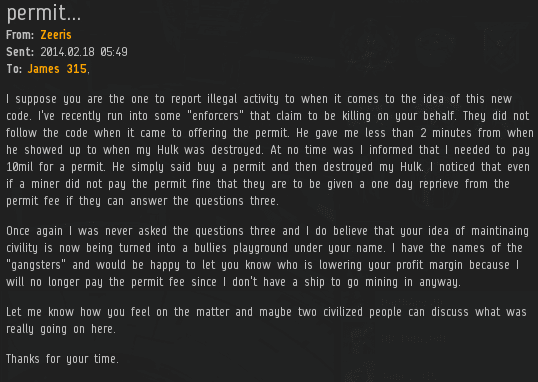 Zeeris extended an invitation for "two civilized people" to discuss what was "really going on here". That's a short conversation--Code enforcement was going on. As for two civilized people, I'm one, but who's the other? There's nothing civilized about calling good people bullies and gangsters.

Everyone knows how much I appreciate a good Code, but sometimes it seems like the miners are speaking in code. Can anyone decipher what Cassel40 is saying?

On second thought, some mysteries are better left unsolved. 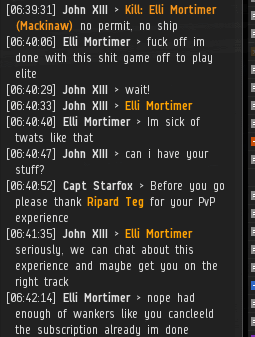 Elli Mortimer lost a few ships and says she's done with the game. No problem. If you don't like losing ships, EVE probably isn't the game for you anyway. Maybe she should try a game like "Call of Duty", where losing ships is rare.

There's something peculiar about a guy named Retardo Khaan calling the New Order a "bunch of retards". If he got ganked again, would he call us a bunch of "khaan artists"? 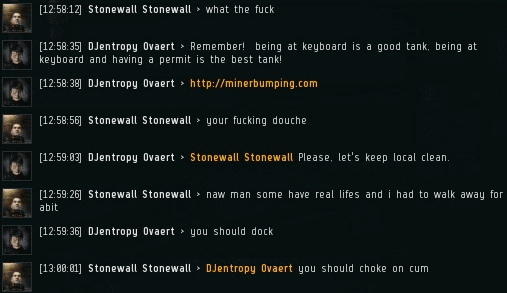 Everyone has opinions, but not all opinions are of equal value. I shudder to think what would become of highsec if people listened to Stonewall Stonewall. Thank goodness they listen to me instead.

Über contempt? He only lost a Retriever. Shouldn't he have saved a German superlative in case he lost a Mackinaw or Hulk--or even an Orca? Good miners plan ahead. Bot-aspirants, if they live at all, only live for the moment. How else can they pass up a permit that lasts 365 days?
Posted by MinerBumping at 19:40