No, I Am Your Father

Today's ray of sunshine comes to us from Agent Rollotamasi, the CEO and sole member of Mine Regs corp. As you'd expect from his corp's name, Rollotamasi helps regulate mining activity in highsec. Mine Regs has adopted the Code as the formal set of regulations for highsec mining. One day Rollotamasi's corp was wardecced by the Short Ship Window Lickers. Then, out of the blue, Rollotamasi was contacted by one of Short Ship's leaders. It seemed Short Ship's diplomat had no idea why they were at war, and requested clarification: 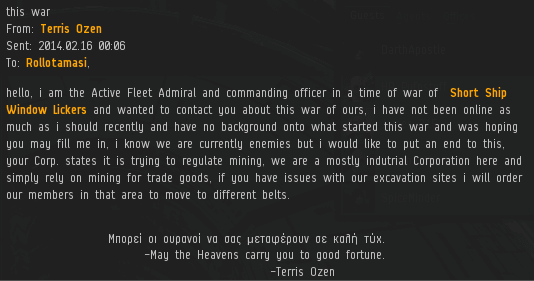 Terris Ozen was the diplomat/"Active Fleet Admiral". He had been away, so he didn't know what caused the relationship between Mine Regs and Short Ship to go sour. Terris saw no problem with a corp that regulates mining activity. It seemed to him like a pretty innocent thing for a corp to do.

Agent Rollotamasi, too, was uncertain about the origins of their war. So he did a little research. On his killboard, he noticed that he'd killed an illegal miner named Carley Mitchell. Twice. (Naturally, the miner was completely untanked both times.) That brought things into focus. 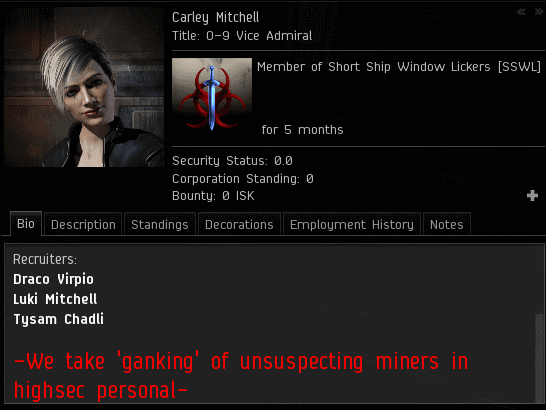 Rollotamasi remembered Carley and her angry reaction to being ganked. That must have been what caused the war. Carley convinced Short Ship's CEO, Draco Virpio, to declare war.

Armed with the knowledge he gained through his research, Rollotamasi was now prepared to bring Short Ship's diplomat up to speed and to suggest a solution. Would Terris accept the proposal, or would he fly into rage and say nasty things about our beloved Code?

The diplomat accepted the proposal. Ha! You didn't expect that, did you? Gotta stay on your toes, dear reader. 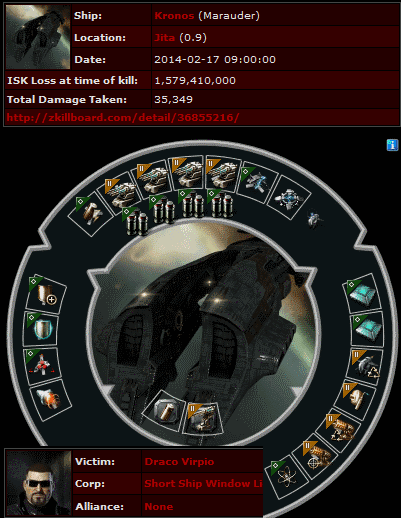 And yet... No surrender offer came. The wardec simply continued. Rollotamasi flew to Jita in a battlecruiser and discovered the Short Ship CEO, Draco Virpio, in an expensively fail-fit Kronos. Our hero had no choice but to destroy it and its half-billion isk pod.

Rollotamasi started to write an EVEmail to the diplomat and was surprised to see that he was no longer a member of Short Ship Window Lickers. It figures. The one reasonable, courteous member of the highsec mining corp had been kicked out. I guess he didn't fit in. As consolation, Rollotamasi informed him that his former CEO--presumably the guy who expelled him--had been vanquished in battle. Next, the Agent sent an EVEmail to the CEO and instructed him to purchase a New Order permit.

Draco confessed that he had been AFK, and that going AFK was the cause of his downfall. Somehow he failed to put two and two together and follow the Code.

They exchanged a series of EVEmails. Trying to reason with Draco was much more difficult than reasoning with the corp's former diplomat. Rollotamasi suggested Draco should try to be more like Terris--a recommendation that made the CEO bristle.

It was of no use. Short Ship Window Lickers had gone down the tubes since Terris' departure. Then Rollotamasi got the surprise of his life. The entire story took on a whole new character when he received a reply from Terris. He'd just read Rollotamasi's earlier EVEmail about the dead Kronos:

"No! No! That's not true! That's impossible!", you say. The two couldn't be more different. Well, in this case, clearly the Gallant fell far from the tree. With each new generation there is a new hope. Rebels of highsec, your children will live under the Code.
Posted by MinerBumping at 18:41