Back in the Dark Ages, before the New Order came to power, people would see terrible things happening in highsec and not do anything about it. 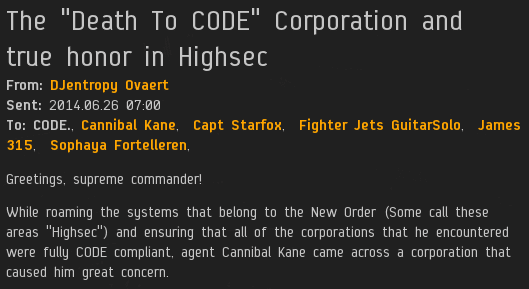 Everyone knows that the New Order has eyes and ears everywhere. Good citizens of highsec still see terrible things sometimes, but now they take action.

Agent Cannibal Kane was traveling through our realm when he came across a wicked sight. A corporation called Death To CODE? With "CODE" in all-caps, even? This could hardly be a coincidence. A new anti-Order rebel organization had popped up!

Kane sent a stern warning to Dragon-hunter Hemanseh, the founder and CEO of the corp. 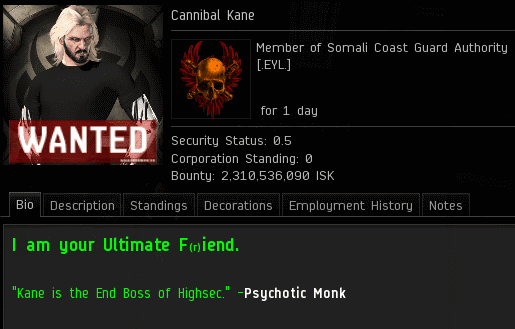 Even rascals and hoodlums who live in highsec can't deny how dangerous it is to get on Cannibal Kane's bad side. He is notorious for wardeccing and destroying corporations single-handed. His EVEmail prompted Dragon-hunter to contact a CODEdot diplomat right away.

Dragon-hunter insisted that the whole thing was just a big misunderstanding. He had no idea "CODE." was an EVE alliance. He must have wished death on some other "CODE". Even so, honour demanded that Dragon-hunter fix the mess he'd made--regardless of whether it was an accident.

Agent DJentropy suggested changing the corp's name by dissolving it and starting over. Since the corp had 13 members and wouldn't be so easily closed and reopened, Dragon-hunter wanted an alternative. 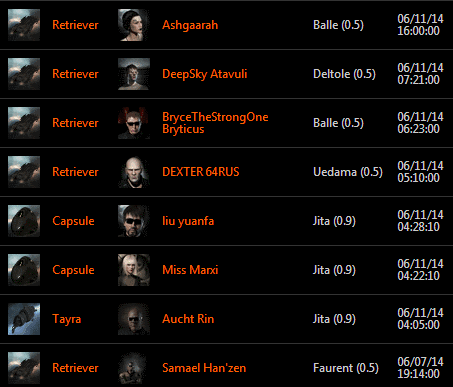 As a demonstration of his good faith, Dragon-hunter referred DJentropy to the killboard of one of the corp's members, Katherine Upton. Though the killmails were only available on Battleclinic, they were API-verified. Katherine had indeed killed many miners in highsec. This changed things. For the sake of one righteous person, perhaps the New Order was willing to save the corp from destruction.

Dragon-hunter was willing to bestow a gift of two billion isk. Would DJentropy show mercy by accepting the money?

...And to think, there are carebears who say I'm a bad influence on people!

Death To CODE pledged its loyalty to the New Order. DJentropy disbursed the funds and took a well-deserved nap. Judging from our successes over the last two years, I think it's safe to say that nobody naps better-deserved naps than our Agents.
Posted by MinerBumping at 18:01