Agent Carry On Friend was off-duty and relaxing in a station when she was approached by a highsec miner named Inel Amure. More and more, the miners are becoming proactive about getting mining permits; they're coming to us. 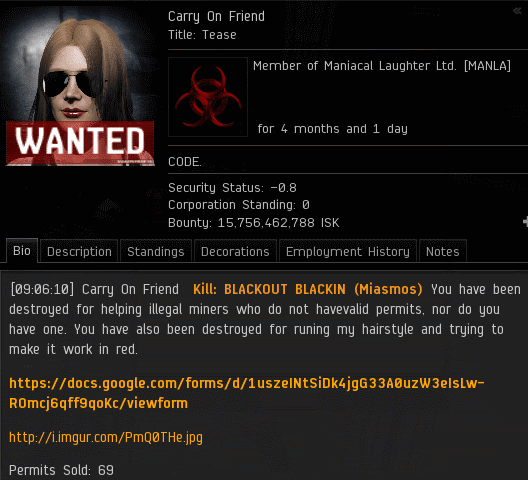 Just a few lines into their conversation, Inel admitted to Carry that she engaged in AFK mining. Carry rolled up her sleeves and got to work. An Agent of the New Order is never truly off-duty.


Carry On Friend > Well that is fine but you must not afk mine even with a permit
Carry On Friend > - No AFK mining allowed. All miners are expected to remain at their keyboards at all times, and are required to prove their presence by responding in local when requested by the Supreme Protector or one of his Agents.
Inel Amure > hmm with delay is okay coz im mining till i work
Carry On Friend > How often do you afk mine
Inel Amure > best way to work and do something in eve
Inel Amure > i duno maybe 1 time in few days
Inel Amure > im not super super miner

Inel did what a lot of criminals do: She shrugged off her own crimes as being less severe than others' crimes.

Then things got interesting. Carry proposed the sale of an "AFK miner pass". Is that allowed under the Code? Had Carry gone rogue? Was it an elaborate sting operation? This is called drama, folks. Keep reading.

Carry needed more information about these AFK miners and their highsec infrastructure. She got it.

Before the negotiations began in earnest, Carry warned Inel that she shouldn't trust anyone in EVE. Scammers abound--even in highsec!

Inel wanted to stretch the payments out, while Carry wanted payment right away. She did not want to be scammed by the miner, which is understandable.

Given the extraordinary and increasing power of the New Order, it's only natural that we, like the powers of nullsec, should rent out space. Technically we don't hold sovereignty, but neither do nullsec coalitions. Even the nullsec alliances themselves don't hold in-game sovereignty over a system after it's rented out.

A lot of EVE players don't like the whole space-rental thing. They believe it turns an allegedly fun videogame into a bunch of work for space lawyers. Yet it is the way of the future.


Carry On Friend > So I have some good news for you, my superior has told me that if you sign a deal with in the hour then we can do 1 billion for one year.
Carry On Friend > Which covers your pos your firends and your afkness.
Inel Amure > sounds good
Inel Amure > im talking to others btw
Inel Amure > im okay for this i dont mind - im wathing other to deside
Carry On Friend > Make sure you link them this because they need to understand the rules they will need to live by http://www.minerbumping.com/p/the-code.html

Inel had authority to negotiate, but she had to continually run things by her associates. Carry strongly encouraged Inel to have all affiliated parties read the Code.

For the first time, Inel began to seriously read the terms of the Code. However, she was already dead set on renting space from CODEdot.

Renting out highsec space is no different from renting out nullsec space. The negotiations continued to drag on. However, just as with nullsec renting, it was a necessary evil because there were no alternatives. A miner can't safely mine in highsec without approval from the New Order. Carry and Inel became increasingly confident that a deal would be completed; they simply needed to hammer out the specifics. Would Inel's highsec renting experience be a satisfactory one, or would it end in heartbreak?