Previously, on MinerBumping... Outspoken rebel Toran Saldera convinced the CEO of his corp, BlackFox ASI, to declare war against a New Order corp. Though they wardecced the wrong corp, Agent Skipper Huitzilopoch had his main join the war as an ally against them and the slaughter commenced. 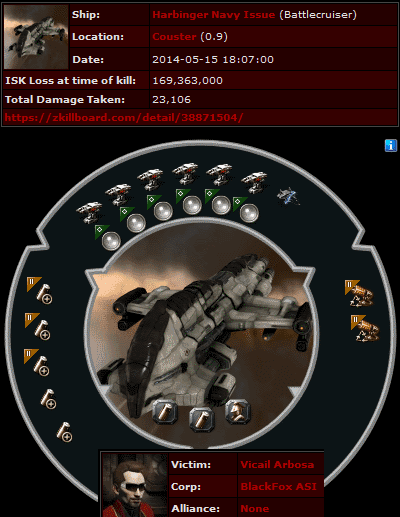 Skipper detected a BlackFox fleet attempting to attack a Customs Office, so he used the opportunity to execute a one-man ambush. The BlackFoxes panicked and fled. Those who couldn't get away died, starting with a battery-grubbing Harbinger Navy Issue. 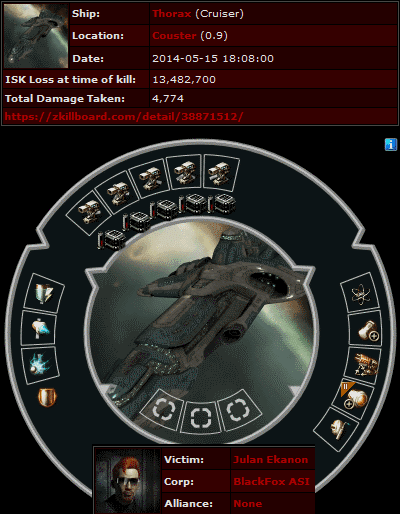 A fail-fit Thorax was also destroyed in this battle.

The BlackFox corp was a bit upset by their inability to strike back at our Agent. Toran Saldera remained the mouthiest member of the corp. However, he still wouldn't put his own ships on the line. 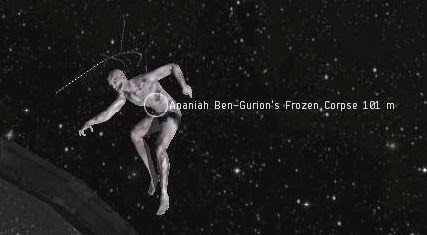 After Toran challenged Shnjago (Skipper's main) to fight, our hero sought out and destroyed more BlackFox members. Among the dead were BlackFox CEO Ananiah Ben-Gurion, who was down to a Rifter, and another frigate pilot.

By this point, it was clear that the members of BlackFox ASI were finally turning against Toran Saldera, whose chest-beating and bad advice had dragged them into an unwinnable war against the New Order. They no doubt encouraged him to take the field himself. Toran would either defeat the Agent or face ridicule in his own corp. Toran was willing to do battle, but only with the assistance of a neutral providing remote reps. 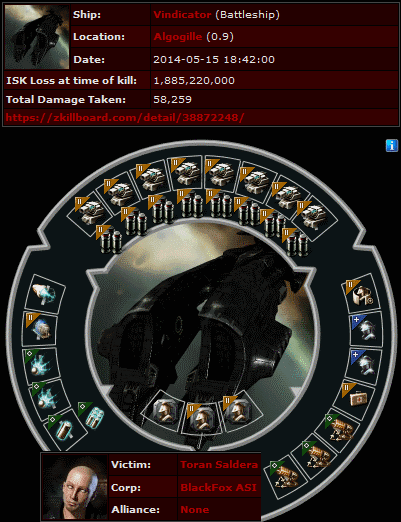 The rebel brought a friend with reps, but the Agent brought the Code. The Code won. Toran's 1.8 billion isk Vindicator melted. It was an extraordinary victory for the New Order. BlackFox ASI's resolve melted even more quickly than the faction battleship. Immediately after the flagship was destroyed, BlackFox's CEO sent a convo request to Shnjago.

There was no use denying it. The entire 35-member BlackFox ASI corp was unable to stand against a single Agent of the New Order. Elite PvP won the day.

This wasn't a social call. The CEO wanted to surrender the war that he'd declared.

There are countless Toran Salderas in highsec. Some days it seems like every highsec PvE corporation has one or two. They encourage their corp to fight the New Order instead of complying with the Code. They only bring ruin upon everyone who listens to them.

BlackFox ASI was required to pay a 250 million isk penalty and pledge never to interfere in New Order business again.

As soon as the payment was received, Toran Saldera hid his face in shame. Contrary to the CEO's official line, the 35 members of BlackFox ASI had been miserable throughout the war, and they blamed it all on Toran. 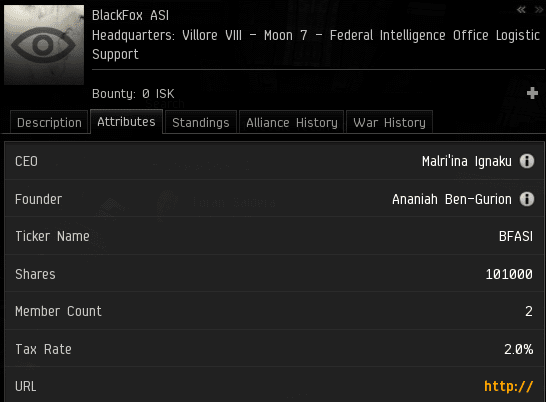 Sadly, BlackFox ASI broke the treaty when a few of them decided to rebuild their confidence by shooting at flashy red targets in a trade hub. They hit one of Agent D400's ships. War was renewed and BlackFox's CEO paid an additional 210 million isk indemnity. Then the CEO quit the corp and BlackFox dissolved. In a few days, it dropped from 35 members down to 2.

And so another anti-Code rebellion wound up in the dustbin of history. BlackFox ASI will be remembered only by MinerBumping readers who note yet another triumph of the New Order and nod approvingly at the steady march of progress in highsec.
Posted by MinerBumping at 18:39