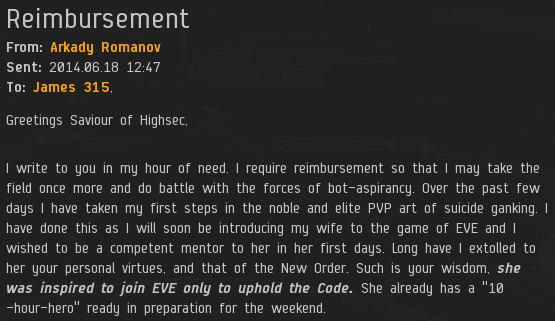 There are a lot of gankers out there enforcing the Code, and they need our support. We don't want it to be like in the old days, when EVE players would spit on the heroic gankers returning home. Buy some shares and show them you care.

Gen Jim Rash did his duty and purchased 2,000 shares, sending us over the 365 and 366 billion isk marks, earning him a Double Supreme Protector's Tip of the Hat™.

Sasha Nyemtsov felt the call and increased his holdings of New Order stock by an additional 1,000 shares, sending us over the 367 billion mark and earning him a Supreme Protector's Tip of the Hat™.

Our troops march onward.
Posted by MinerBumping at 17:33